Recently I released a new version of svelte-store-tree. It's a state management library for Svelte that I started to develop two months ago, and redesigned its API in the latest version. Today, let me introduce the detailed usage of svelte-store-tree, and compare with a similar library: Solid.js's store feature. Then, I'll share you with a problem of Svelte's store. I'm glad if this article helps you review the design of Svelte in the future.

As the name shows, svelte-store-tree adds1 methods to the store objects of Svelte, to easily work with trees (nested structures). I developed it for building a complex tree structure intuitively in my current job with Svelte.

From this section, I'll use the type below in the example app you can run here.

It's really a recursive structure with various possible values.

NOTE: I uploaded the code of the example app onto GitHub, so I'll put the link to the corresponding lines in GitHub after quoting the part of the code.

In the same way with the original writable function, writableTree receives the initial value of the store as its argument. Because Tree is a union type, we should specify the type parameter to help type inference in the example above.

svelte-store-tree complies with the store contract of Svelte. Accordingly prefixing the variable name with a dollar sign $, we can subscribe WritableTree/ReadableTrees and set WritableTrees. Of course two-way binding to the part of the store tree is also available!

Create a WritableTree for a part of the tree by zoom

svelte-store-tree provides a way to make a store for some part of the tree as these methods whose name begins with zoom:

In the example app, I created WritableTrees for writing the key and value field of the KeyValue object, using the into function for building Accessors:

However, this isn't correct. svelte-check warns me of type errors detected by TypeScript:

The messages are somewhat confusing as it says parameter of type 'never'. The type checker means the result of keyof Tree is never because the type of tree is WritableTree<Tree>, whose content Tree is by definition a union type that can be undefined.

To fix the problem, we have to convert the WritableTree<Tree> into WritableTree<KeyValue> by some means. The choose function helps us in such a case.

Subscribe the value only fulfilling the condition using choose

We can create a store tree that calls the subscriber functions only if the store value matches with the specific condition, by calling zoom with an Accessor from the choose function.

Here I used the choose function in the example app:

choose takes a function receiving a store value to return some other value, or Refuse. The chooseKeyValue function is the argument of choose in the case above. It's defined as following:

A WritableTree object returned by choose calls the subscriber functions when the result of the function (passed to choose) is not Refuse, a unique symbol dedicated for this purpose2.

You might wonder why choose doesn't judge by a boolean value or refuse undefined instead of the unique symbol. First, the function given to choose must specify the return type to make use of the narrowing feature of TypeScript. The user-defined type guard doesn't help us with a higher-order function like choose. Second, I made the unique symbol Refuse to handle objects with nullable properties such as { property: T | undefined } properly.

Let's get back to the problem of converting the WritableTree<Tree> into WritableTree<KeyValue>. The error by tree.zoom(into("key")) is corrected using choose:

Finally, we can two-way bind the key and value returned by zoom:

Parents can react to updates by their children

For example, assume that the <input> bound with the key from the last example got new input.

To illustrate, imagine the tree were shaped as follows: 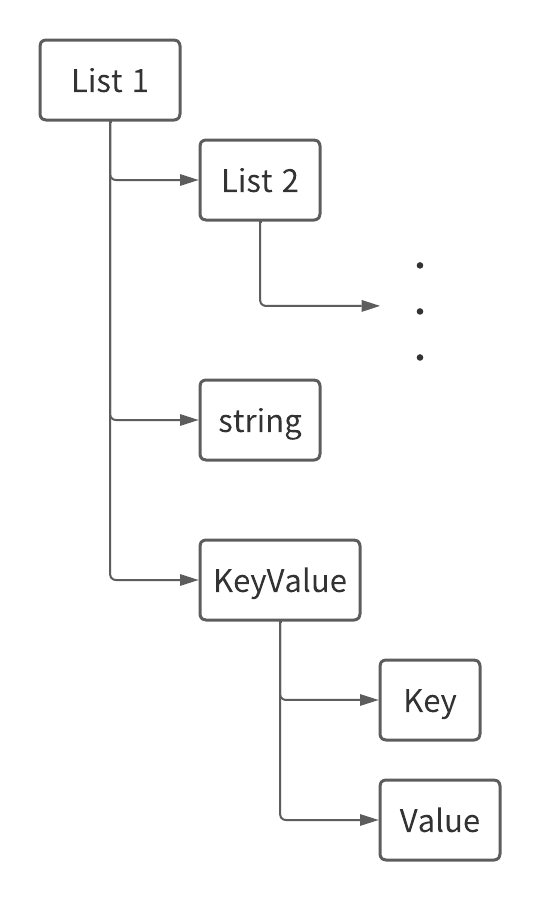 When updating the Key, the update is propagated to the three stores: List 1, KeyValue, and Key. 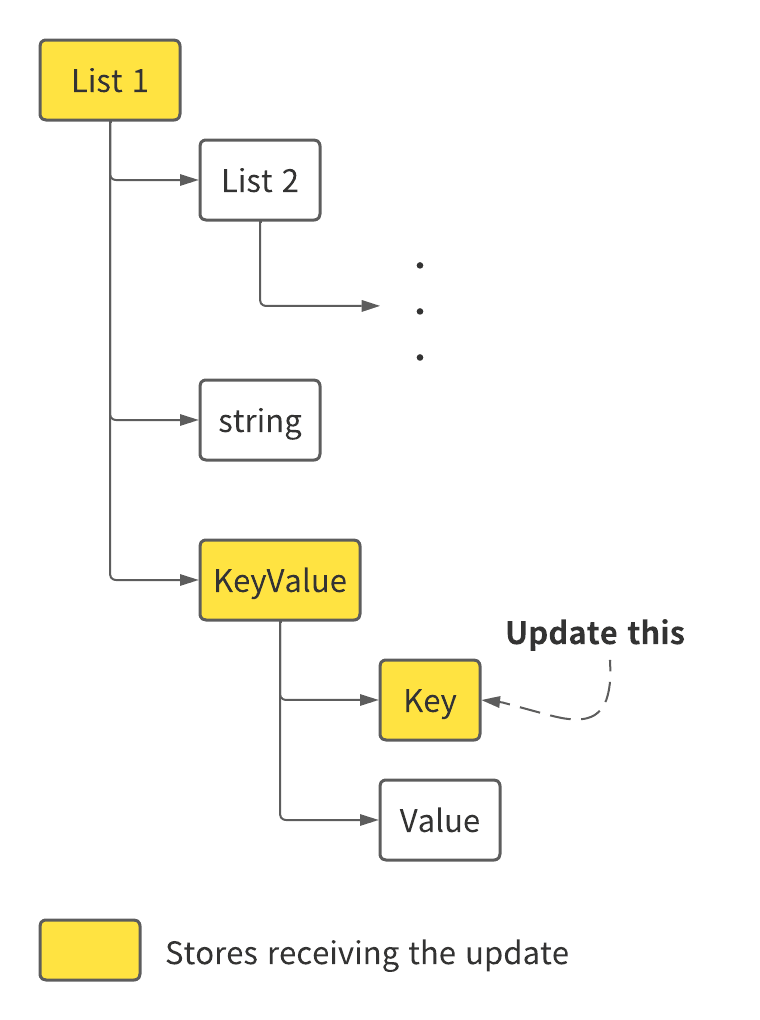 To demonstrate that feature, the example app sums up the number of the nodes in the tree by their type:

Solid.js's store, as the page I referred in the last section described as "Solid's answer to nested reactivity", enables us to update a part of nested structures and track the part of the state. The createStore function returns a pair of the current store value, and the function to update the store value (slightly similar to React's useState):

ℹ️ All examples in this section are quoted from the official web site.

The first thing of the pair, state is wrapped by a Proxy so that the runtime can track access to the value of the store including its properties.

Using the second value of the pair setState, we can specify "path" objects, such as names of the properties and predicate functions to decide which elements to update (if the value is an array), to tell which part of the store value should be updated. For example:

The setState is so powerful that it can update arbitrary depth of the nested structure without any other library functions.

Somewhat affected by Solid.js's store, I improved the Accessor API of svelte-store-tree, used to show how to get deeper into the nested structure. Specifically, svelte-store-tree can now compose Accessor objects by their and method as the setState function of Solid.js (the second value of the createStore's result) can compose the "path" objects given as its arguments.

For example, by combining the into and isPresent Accessor, we can make a store that calls subscriber functions if its foo property is not undefined:

Thanks to them, the code to obtain the key property from the tree in the example app can be rewritten like below:

Why don't I define the zoom method to receive multiple Accessors to compose? One of the reasons is to simplify the implementation of zoom, and another is that it's not a good idea to pile up many Accessors at once to access to too deep part of the nested structure, in my opinion.

In detail, the former means that the code of zoom is more concise because it doesn't have to take care of multiple Accessors. Composing Accessors is just the business of the and method.

And the latter is a design issue. Diving several levels down into a nested structure at a time is like surgery for the internal: it incurs a risk that the code gets vulnerable to change. Besides, composing Accessors by listing them in the arguments can't work well for recursively nested structures, which I suppose to be a primary use case of svelte-store-tree. Because their depth varies dynamically.

I determined this design based on the usage I assumed, at the sacrifice of verbosity of composing the and methods.

Feature that svelte-store-tree failed to support

I made svelte-store-tree aim for "the Solid.js's store for Svelte". But I couldn't reproduce one of its features anyway: Solid.js does NOT need a feature equivalent to svelte-store-tree's choose function3. I wasted a section for describing choose in a way!

Solid.js's store can select the value only by branching in the component on its value using Show or Switch / Match (if statements in Solid.js).

The same seems appied to svelte-store-tree, but that isn't true. Recall the first example of choose:

So you might try modify the component like following with {@const ...} after key and value are used only in the {:else}:

Though svelte-check raises an error about the {@const ...} below:

It says that stores must be declared at the top-level4, thus you can't define a new store in a {@const ...} to subscribe. It's impossible to make a store only on a specific condition so far.

To avoid that error forcibly, you have the option to split out a component containing only <input type="text" bind:value={$key} /> and <input type="text" bind:value={$value} /> then make the component take a WritableTree<KeyValue>. However, there is still a type error: the branching beginning with {#if typeof $tree === "string"} narrows only $tree, that is the current value of tree, so doesn't narrow the tree to WritableTree<KeyValue> from WritableTree<Tree>. TypeScript doesn't take that into consideration.

Due to the problem I showed here, I gave up adding the feature following the exisiting convention of the store of Svelte.

Why do we have to narrow the store itself as well as its value in Svelte? Because Svelte assigns both the API to read the store value (subscribe) and the API to update (set etc.) to the same single object. I'll simplify WritableTree to explain the detail:

Let's give a concrete type such as number | undefined to WritableTree to instantiate a store whose value can contain undefined:

Using AppConfig Layer in your nodejs lambda with AWS CDK

Once suspended, igrep will not be able to comment or publish posts until their suspension is removed.

Once unsuspended, igrep will be able to comment and publish posts again.

Once unpublished, all posts by igrep will become hidden and only accessible to themselves.

If igrep is not suspended, they can still re-publish their posts from their dashboard.

Once unpublished, this post will become invisible to the public and only accessible to YAMAMOTO Yuji.

Thanks for keeping DEV Community 👩‍💻👨‍💻 safe. Here is what you can do to flag igrep:

Unflagging igrep will restore default visibility to their posts.