Java Persistence API (JPA) provides the specification of managing data, such as accessing and persisting data, between Java Objects and the databases.

There are obviously many ways in JPA that could be used to interact with a database such as JPQL(Java Persistence Query Language), Criteria API, and Entity specific methods such as persist, merge, remove, flush, etc.

I initially found Criteria API quite intimidating. To be frank, I had to invest quite some time to figure it out. It eventually turned out to be quite a fluent API. I thought why not just write about the experiences. So here it is, “Creating Programmatic Criteria Queries using JPA Criteria API”.

We will be using the following domain model for building the criteria queries in this tutorial. 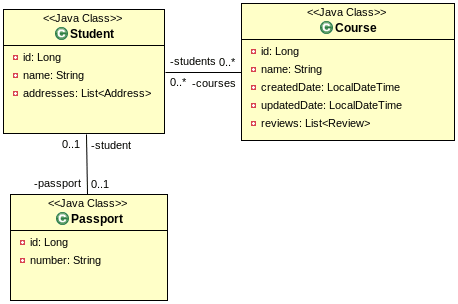 We have three Objects( ref. to diagram above ) Student , Course and Passport. Each of the Objects has a relationship with each other:

We will begin with a simple Criteria Query and slowly try to build upon it.

The above code example retrieves the total count of students present in the database.

Criteria queries are an Object graph where each part of the graph represents an atomic part of the query. The various steps in building the object graph roughly translate to the following steps.

The final output of the above example is below :)

It seems quite the over work–doesn’t it. The output of so many lines of code is just a plain old SELECT query. But the Criteria API was created to serve a different purpose i.e programmable Query API. It helps to build queries dynamically. You could write just one program to build queries for all objects in your application or build queries depending upon your business logic.

Let’s say, we want to get the count of either Students, Courses or any other entities present in our application. We could either write different queries for each of them or we could only use Criteria API.

I have only updated the previous example to allow the generic parameter which specifies the Class of the Entity. The rest of the Code stays the same. You can learn more about Java Generics here.

Let’s look at the above example in detail.

CreateQuery method takes the Class name of the result type as an argument.

The Root refers to the entity on which the query would be run such as Student.class in the above example.

The select method specifies the result to be returned by the Query. If all the attributes of an entity are supposed to be returned instead of just returning the count, we could pass the root entity as the parameter such as below.

If you have come this far, you might also want to read about various methods, Criteria API provides to implement criteria join, Fetch Join, Aggregate functions, and subqueries. I have posted a detailed post about it. Click here to check it out.

From Java 8 to Java 15 in Ten Minutes