image is borrowed from rietti.com

I have hit a hard wall trying to develop with OCaml/ReasonML/Docker/Esy etc. This stack will get you fast app but the build environment is brutally disk space heavy.

I had a bunch of scripts that clean up my computer every night. The scripts deleted every React Native related file, clean the simulator out, deleted all node modules in my working directories and the ~/.esy and ~/.pnpm cache directories on my machine. I could usually get back to about 20-30GB to start my next day of coding.

This worked for a while until I tried to work on a pull request on the esy/esy. Building esy got me down to about 3GB of space which makes it super slow to work on this mac.

You can set the default root directories to something different for all of the above programs. The first thing I did was change the name of my ssd drive to SSD because its easier to type than Samsung Portable SSD T5. I then create an enviromental variable for my external drive using the fish shell.

I then set my roots:

Then test it on a random project to check where the pnpm cache is being generated:

We can see that the .pnpm-store directory was created on our external ssd drive. So that works.

I wanted to use .esyrc because it seems cleaner but I could not get it to work.

For OPAMROOT. There are apparently a few ways to do this per the man-pages but I could not get them to work so for now we stick with @etiennemillon's suggestion on discuss.ocaml.org. Thank you @etiennemillon.

Be sure to run opam init after you have set the root.

I am using the excellent Schniz/fnm node package manager. Mostly because I was loyal to ReasonML. Now it written in Rust but the support there is still ReasonML level friendly and responsive so, fnm it is.

@galstar, who built fnm, says that I just need to change my fish.config to source the directory where I want the cache to be with

For Docker, make a directory on your ssd for Docker to use to store images and whatever else it stores. Here I have named it Containers because that is what @frankrietta's rietta.com almost right on point blog post says. The blog doesn't use Macos Catalina but its totally worth the read anyway.

Assuming you have already installed Docker, open the dashboard: 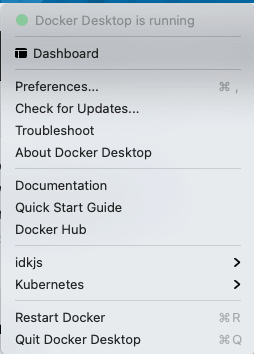 Click the settings icon to the left of the upgrade button:

Then the resources tab in the menu: 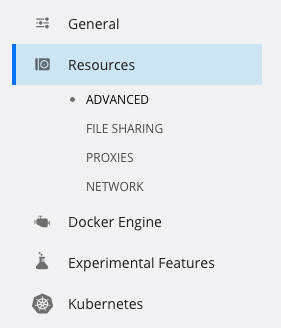 Then change the disk image location directory to the directory you created above. 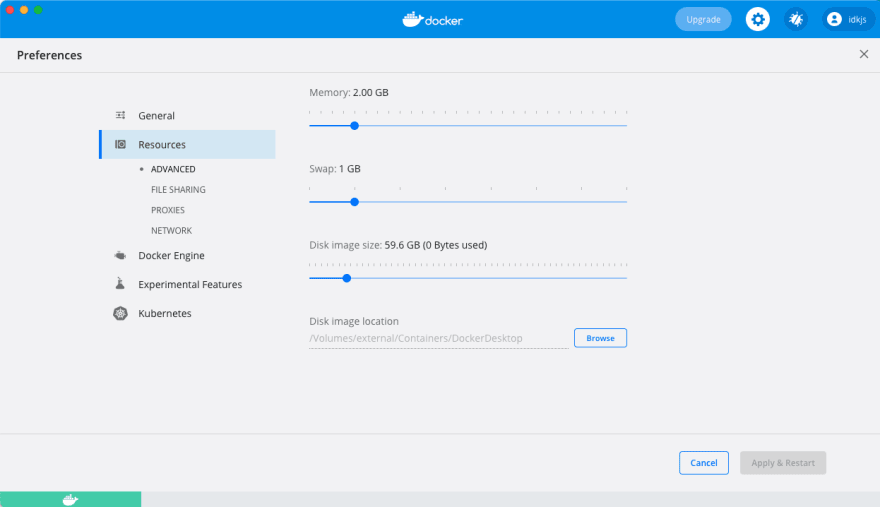 After you click apply changes, you should be good to go.

Now lets test it by running some random project that uses all these build tools. For that I'll use @davesnx's reason-in-barcelona/async. I am going to clone it to a folder not on my ssd to see how this goes.

The project requires watchexec and direnv so make sure you have those installed.

Now let's run make dev from the Makefile and see if this worked.

That looks like it worked, thankfully. Let see what happens when we try to build the local db with docker by running docker-compose -f docker-compose.dev.yml up -d.

That also works! And my primary disk space is unaffected. Big win.

I guess I should have said go get a coffee because the previous steps take so long. You have to pay for the fast and typed end product by taking the time to install your ocaml build env...

As I ran that command I realized that the project doesn't use esy so I am going run the quickstart steps from the esy.sh to test the esy setup.

Since I deleted my .fnm before I started this process I am going I need to reinstall esy.

Running esy does not work. Apparently, my environment does not know that it is there. Anyone know what is going on here? I have posted this in the discussion for esy@next here. I will get back to you all when I figure this out.

I used my trusty go to debugging method, just trying stuff, which got us esy working. At the very beginning, I got cute and ran npm config set prefix $SSD/.npm which resulted in out $HOME/.npmrc file looking like this:

When I read the output from npm i -g @esy@next I saw a bunch of symlinks. I have learned the hard way over the years that symlinks are not always your friend. I removed prefix=/Volumes/SSD/.npm from .npmrc, ran npm i -g esy@next again, then running esy in the hello-reason directory worked.

If your run ls in your external volume, you will see that that esy is using it to cache files.

I should probably delete the .npm dir.

Let see if there are any other issues. I find that there is usually some quirk that show up later on so I am sure I will be back.

XCode is the master of all disk space hoarders. Dealing with XCode and Esy/OCaml's disk space was the point of this excersize and when I went to use this set up, I realized I had forgotten about Xcode.

This is what I did to get this going.

There are a bunch of good bits in there though the author says he doesnt vouch for it with XCode 12.

Go to https://developer.apple.com/download/more/?q=xcode, sign in if you have to and select the version of XCode you want. I selected the latest stable version which was XCode12.3.

If you have space issue, which is why you are reading this, you will want to download this to your ssd. I set my browser download location to my SSD drive and double clicked on XCode12.3.zip. This takes a while as you know.

I then deleted the old XCode with CleanMyMac. You can do without it from the terminal with:

Then you want to symlink Xcode from your ssd to your ~/Applications directory.

Set up the simulator by

Important! Double Click XCode to open it so that it prompts you accept the license. If you dont do this, when you have symlinked the simulator it will just silently shutdown.

After you have accepted the license you can close Xcode which will have opened.

Tell XCode which XCode to use:

Tell XCode which xcode-select to use: 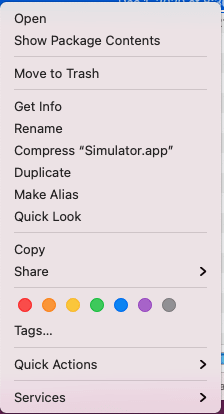 Copy/Drag that to ~/Applications.

Now if you go into some project and run react-native run-ios it should be good to go.

I hope this help you all with limited disk space trying to do too much with your limited tools like I am. 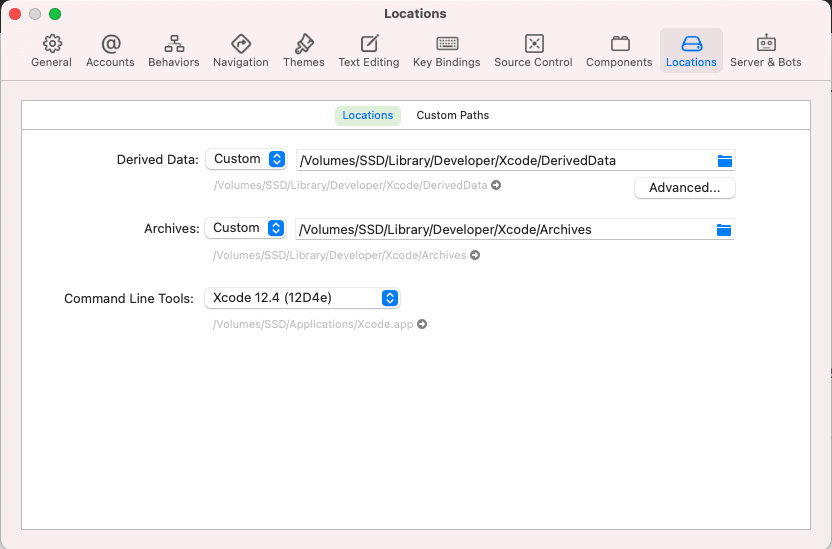 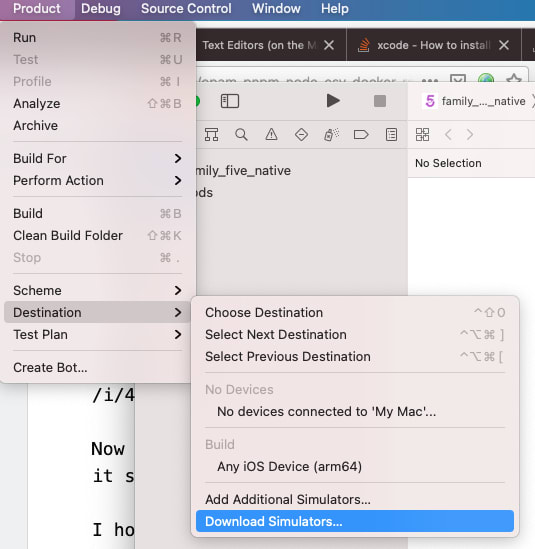 Hopefully these are now being installed in our custom directory on our external SSD.

This also seems to work: https://www.simpleswiftguide.com/how-to-add-missing-iphone-se-simulator-in-xcode-11-with-ios-13-sdks/

5 GitHub Projects to make you a better DevOps Engineer ⚡

MongoDB with Docker: Get started in 5 minutes