(Full code and Git link at bottom, Part 1 is here)

First things first. On the shoulders of giants are small irrelevant programs made :D. I have to give full kudos to folks who write things like Inline, Inline::cpp, SDL etc. So much work put into things like these, I think they often don't get enough appreciation, so a big round of applause from me.

We should end up with a window and image as below: 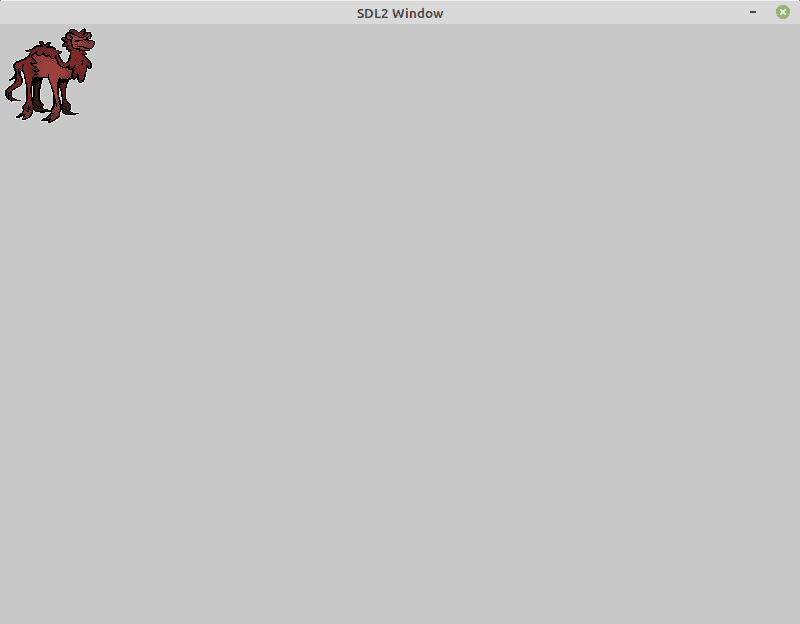 Right, recap time for Part 2!! The main code and Git link is at the end. If you've followed that, you should hopefully have Inline::cpp working with some c++ code, and SDL2 window appearing. Small acorns and all that! Any problems let us know.

So let's develop the Perl and c++ a bit further to get an image on the page, and a basic Object passing some info between the languages.

We'll create an Entity in Perl (i.e an object that represents something we can move about), and the fiddly bit, is an Object in c++ which represents the graphics portion of the object. There's a few ways to skin this cat, and I'm not sure which is the best approach, and I'm happy to hear others ideas.

My main theory is to leave all the graphical heavy lifting on c++, things like graphics, vertices, any big datasets. Then decision making, logic etc, where an object is, the stuff we want to play with easily in Perl. So x,y in Perl, how an object is represented graphically in c++.

For the moment, I'm going to call the Perl game object/entity an erm Entity, and the c++ object a Gfx object, and link the two (well Inline automatically links c++ objects to Perl).

We will end up with:

So I'm going to create a new package for the Entity in Perl. the gfx methods we'll define later in c++ below.

This is going to go right at the top of our code after our "use" statements. It's a basic object with a few attributes. Note the "Gfx"

Whenever we create a new player, enemy, object, it will have a few attributes, like if it's alive, where it is on the screen etc. Lower down in our main package, we'll create one, which will be the player! It may be nice to create getters/setters for x,y etc, but I'm trying to keep the code down just for the moment for simplicity.

is calling the c++ object gfx of class Gfx we have created in our c++ code.

Now, we need Perl to call those c++ classes, and methods. Remember, Inline::cpp makes classes available (and structs with a bit of extra work, see Part 1 tutorial). So let's have a look at an example c++ class to use!

So there's not a lot of clues here, but the c++ Gfx class has an x,y, w(width), h(height), and a couple of methods to set its options we can use on the c++ side. Why don't we write this bit in Perl ? Well, we want to pass some information to various methods in c++, so it makes it simpler passing those types about. Again, there may be a better way to do this!

Now, if you have your code from Part 1, we also had the Sdl class. We're going to extend that a bit to be able to store an image.

This is in the existing Sdl class (from Part 1)

Eeek! What on earth ? Ok, this is where the SDL docs need to be read a bit to understand what each one does. There's a wiki at https://wiki.libsdl.org/ but it needs a bit of digging through the tutorials and API.

So what I'm doing here, is creating a method which will take (from Perl in our case) the name of an image, which "slot" we'll load it into (just our own array here, so we can reuse image/textures). Convert this to a texture, which we'll store in the graphics card. So we'll have an array of pointers to texures/images.

load in the image from the filesystem, and test it loaded ok.

This is creating a texture from the image. The difference here, is that in SDL2 the textures can be stored on the graphics card. So we'll manipulate "textures" now instead of images.

We no longer need that temporary bit of image/surface space, so we'll get rid of it to be nice and clean.

Now, we're going to create another couple of c++ methods.

First one, clear the "renderer" or screen in this case (sort of), but we'll set a colour for it to clear to. In this case, a healthy "grey" colour ;). (couple of languages differences for our friends over the pond there ;))

Then renderPresent will update the screen with any rendering we've stored (we save it to a buffer which then gets splatted to the screen).

Now, this following bit, we're just using the Perl entities gfx reference, copying the basic values into an Sdl rect, and then passing to an SDL Render method, which takes a texture, a position (our Rect) and displays it on the screen with SDL_RenderCopyEx. There's a couple of bits on there, like SDL_FLIP and whether we it to be a mirror image reversed or not. Why don't we just pass the Perl entity ? c++ doesn't know about Perl objects, and Perl doesn't know about SDL Rect types, so we have to convert them.

Now, finally back to Perl! We've created our $sdl object in Part1 which opened up a window and referenced Sdl2.

We'll now call these new c++ methods, firstly to load our image.
Then to clear the screen to grey.
Then to update our c++ reference to our Entity with our new position.
Then to splat the screen with the buffered texture.

You can download the Camel from Github here, save into the same folder as the script.

FULL CODE BELOW (or Git link at bottom)! (Save both sections in one file)

Code and image all avaiable on Github here

Extra thoughts:
methods like renderClear(); feel too SDL specific, so maybe Perl should start to reference more graphics library agnostic names. Eg clearScreen() and updateScreen(), then if we want to use Opengl or something, the Perl part of the code would likely need to change less.

Once suspended, ibrierley will not be able to comment or publish posts until their suspension is removed.

Once unsuspended, ibrierley will be able to comment and publish posts again.

Once unpublished, all posts by ibrierley will become hidden and only accessible to themselves.

If ibrierley is not suspended, they can still re-publish their posts from their dashboard.

Once unpublished, this post will become invisible to the public and only accessible to Ian.

Thanks for keeping DEV Community 👩‍💻👨‍💻 safe. Here is what you can do to flag ibrierley:

Unflagging ibrierley will restore default visibility to their posts.