How do you set up a CI/CD pipeline for serverless applications?

This blog post will explain how to use Travis CI, The Serverless Framework and the AVA testing framework to set up a fully-automated build, deploy and test pipeline for a serverless application. It will use a real example of a production serverless application, built using Apache OpenWhisk and running on IBM Cloud Functions. The CI/CD pipeline will execute the following tasks...

Before diving into the details of the CI/CD pipeline setup, let's start by showing the example serverless application being used for this project...

No other cloud services, like databases, are needed by the backend. Release candidate information is retrieved in real-time by parsing the HTML page from the ASF website. 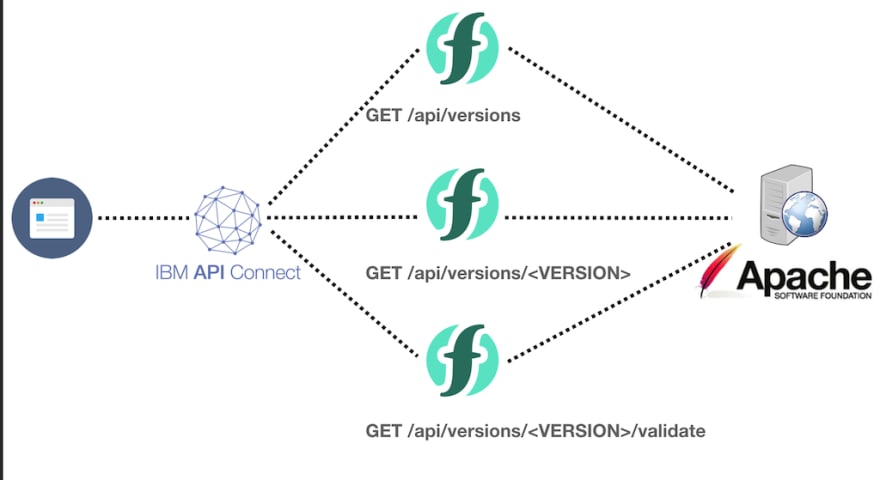 The Serverless Framework (with the Apache OpenWhisk provider plugin) is used to define the serverless functions used in the application. HTTP endpoints are also defined in the YAML configuration file.

The framework handles all deployment and configuration tasks for the application. Setting up the application in a new environment is as simple as running the serverless deploy command.

I'm using a custom organisation for the application with three different spaces: dev, test and prod.

dev is used as a test environment to deploy functions during development. test is used by the CI/CD pipeline to deploy a temporary instance of the application during acceptance tests. prod is the production environment hosting the external application actions.

The IBM Cloud CLI is used to handle IBM Cloud Functions credentials. Platform API keys will be used to log in the CLI from the CI/CD system.

When Cloud Functions CLI commands are issued (after targeting a new region, organisation or space), API keys for that Cloud Functions instance are automatically retrieved and stored locally. The Serverless Framework knows how to use these local credentials when interacting with the platform.

The Apache OpenWhisk Release Verifier is not a critical cloud application which needs "five nines" of availability. The application is idle most of the time. It does not need a highly available serverless architecture. This means the build pipeline does not have to...

New deployments will simply overwrite resources in the production namespace in a single region. If the production site is broken after a deployment, the smoke tests should catch this and email me to fix it!

Given this tool will be used to check release candidates for the open-source project, I wanted to ensure it worked properly! Incorrect validation results could lead to invalid source archives being published.

Additionally, I've used end-to-end acceptance tests to validate the HTTP APIs work as expected. HTTP requests are sent to the API GW endpoints, with responses compared against expected values. All available release candidates are run through the validation process to check no errors are returned.

Unit tests are implemented with the AVA testing framework. Unit tests live in the unit/test/ folder.

The npm test command alias runs the ava test/unit/ command to execute all unit tests. This command can be executed locally, during development, or from the CI/CD pipeline.

API endpoints in the test and production environments are exposed using different custom sub-domains (apache-api.jamesthom.as and apache-api-test.jamesthom.as). NPM scripts are used to provide commands (acceptance-test & acceptance-prod) which set the environment hostname before running the test suite.

When new commits are pushed to the master branch on the project repository, the following steps needed to be kicked off by the build pipeline…

If any of the steps fail, the build pipeline should stop and send me a notification email.

Here is the completed .travis.yml file for this project: https://github.com/jthomas/openwhisk-release-verification/blob/master/.travis.yml

In the install phase, I need to set up the build environment to deploy the application and run tests.

The Serverless Framework is installed as global NPM package (using npm -g install). The Apache OpenWhisk provider plugin is handled as normal project dependency, along with the test framework. Both those dependencies are installed using NPM.

This phase is used to run unit tests, catching errors in core business logic, before setting up credentials (used in the script phase) for the acceptance test environment. Unit test failures will halt the build immediately, skipping test and production deployments.

Custom variables provide the API key, platform endpoint, organisation and space identifiers which are used for the test environment. The CLI is authenticated using these values, before running the ibmcloud fn api list command. This ensures Cloud Functions credentials are available locally, as used by The Serverless Framework.

Acceptance tests use an environment variable to configure the hostname test cases are executed against. The npm run acceptance-test alias command sets this value to the test environment hostname (apache-api-test.jamesthom.as) before running the test suite.

If all the proceeding stages have successfully finished, the application can be deployed to the production. Following this final deployment, smoke tests are used to check production APIs still work as expected.

Using the skip_cleanup parameter leaves installed artifacts from previous phases in the build environment. This means we don't have to re-install the IBM Cloud CLI, The Serverless Framework or NPM dependencies needed to run the production deployment and smoke tests.

If all of the build phases are successful, the latest project code should have been deployed to the production environment. 💯💯💯 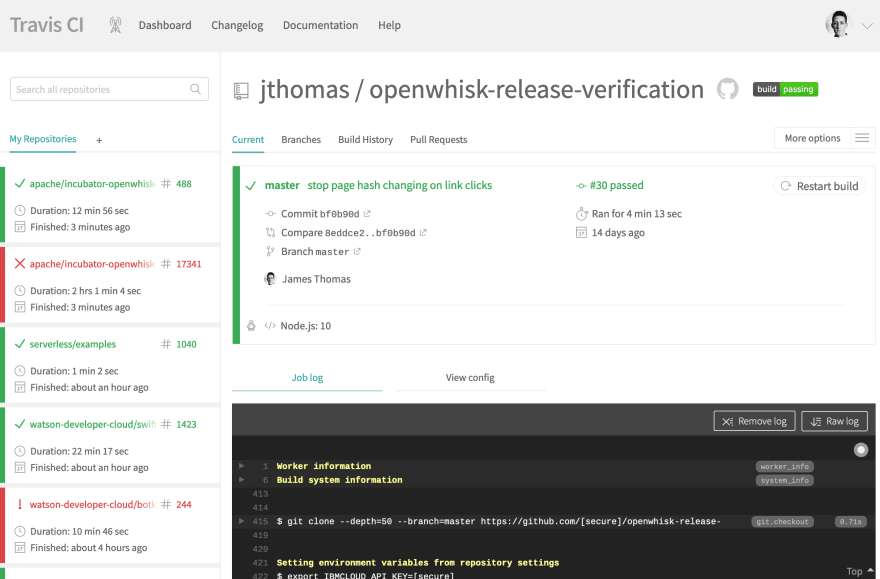 If the build failed due to unit test failures, the test suite can be ran locally to fix any errors. Deployment failures can be investigated using the console output logs from Travis CI. Acceptance test issues, against test or production environments, can be debugged by logging into those environments locally and running the test suite from my development machine.

Using Travis CI with The Serverless Framework and a JavaScript testing framework, I was able to set up a fully-automated CI/CD deployment pipeline for the Apache OpenWhisk release candidate verification tool.

Using a CI/CD pipeline, rather than a manual approach, for deployments has the following advantages...

Having finished code for new project features or bug fixes, all I have to do is push changes to the GitHub repository. This fires the Travis CI build pipeline which will automatically deploy the updated application to the production environment. If there are any issues, due to failed tests or deployments, I'll be notified by email.

This allows me to get back to adding new features to the tool (and fixing bugs) rather than wrestling with deployments, managing credentials for multiple environments and then trying to remember to run tests against the correct instances!

Drop those credentials, use Single-Sign-On Login instead

Building a real-time location app with Node.js and Socket.IO

Once unpublished, this post will become invisible to the public and only accessible to James Thomas.

Thanks for keeping DEV Community 👩‍💻👨‍💻 safe. Here is what you can do to flag ibmdeveloper: