Infrastructure as Code is getting more and more attention and for good reasons.
Previously infrastructures where created and maintained by hand, which works well until... 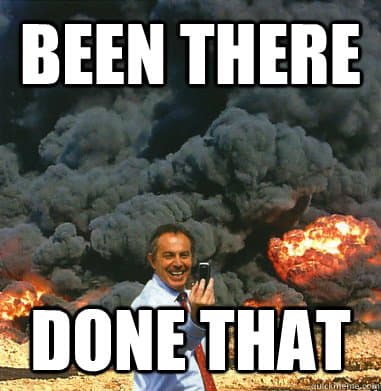 So when I needed to create a new database cluster I looked into a setup that would be reproducible and it should be testable before it was deployed on the actual servers.

For stateless things we can used docker but that wasn't a great fit for the database servers as we need to have persistent storage and scaling and/or changes where not expected that often.

I went for a golden oldie: Ansible
While I had worked with it before, it was mainly putting some roles together run the script and validate, manually, that it worked.

This time around I didn't want to 'test' the provisioning manually. As the setup was a bit larger and the overhead (commit, deploy) was bigger.

So I thought there should be a smarter and better way.

Start of the journey

As I am mainly a dev engineer, I didn't had thorough expertise on Ansible. (still don't) So Google it was to get the journey started. Looking through all the things, I mostly saw tests for Ansible Roles. Or ways to test the playbook on the target systems, but I wanted to test the playbook before deployment during the build and/or locally.

Turned out it was not that hard to create, but getting all the information was.
Because of the combination of Ansible and Vagrant and probably my lack of knowledge on those topics 😃~

First off, what are we actually going to provision?
We will be provisioning a 3 server cluster of a database server, RethinkDB
You probably didn't heard from it before, and you can forget about it after reading this.

There will be some specific commands for rethinkDB, but most of it will be about the testing setup and ways you should test. 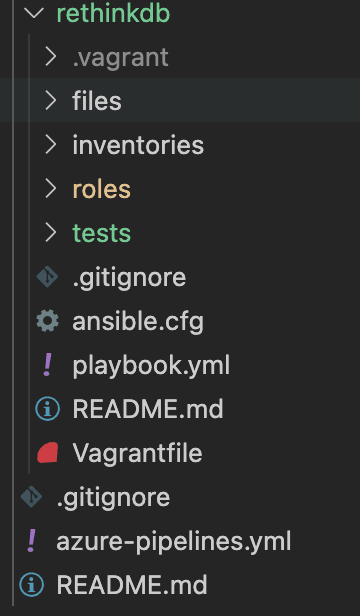 A pretty normal layout for Ansible projects.
The part we will focus on is the test folder.

There are a few levels of testing that can be done for the Ansible playbook.

In my case the roles I created where specific for my situation so I didn't, wanted to, create unit tests as that would have been a bit overkill.

Instead I focussed on a few other things:

The role itself should validate if the work it did was actually executed and working as intended.

Making sure roles are doing what they should

So for instance the install-rethinkdb role should validate that it did install the package provided.

To do so, we get the version that is installed by executing the rethinkdb -v command and save the output. In another step we validate that the output is what we expect.
This way we are verifying that the installation of the (new) version went successful as the version is being used.

For this we restart the service via systemd and wait for couple of seconds.
We then get the service_facts and validate that the service is in a running state.

The take way here is that you should look at your roles as parts that will have a single purpose and that you should also validate that they do what you expect. Role tests and such are great but verifying it during runtime is a must, as that is what matters in the end

Testing the playbook in a controlled (local/build) environment

For testing the playbook we need servers to executed the playbook on.
In comes, if you looked at the layout you could have guessed it, Vagrant

So here is the Vagrantfile that I used, I added some comments in there to help you understand what is going on.

In short, it will provision 3 servers that are in an own private network and execute the (test) playbook on those servers. Effectively creating a local database cluster.

The 'test' playbook looks like this:
I am using a specific playbook for tests as I needed to add a few things that are normally there if you get a server from your provider. At least that was the case in my project.

In the post_taks you can add as many assertions as you want/need. Make sure that you at least test the basics, so that the thing you installed is up and working.

Well we only need to run one command to test the whole thing:

Or if you want to execute it on Azure DevOps:

This will start the Vagrantfile and in effect create the VM's and start the playbook execution.

With this setup you are sure that the provisioned servers are working as intended and that if you make a change it is validated. Even after the creator left 😄

We now have a local running database cluster that is tested and, as a bonus, you can use it for development.

If you have any question regarding testing Ansible playbooks and or setting up a local Vagrant (cluster) environment, please let me know! (Not sure if I can answer them but will do my best 😰)

Also any other remarks/improvements are always welcome.

Once suspended, hvdb will not be able to comment or publish posts until their suspension is removed.

Once unsuspended, hvdb will be able to comment and publish posts again.

Once unpublished, all posts by hvdb will become hidden and only accessible to themselves.

If hvdb is not suspended, they can still re-publish their posts from their dashboard.

Once unpublished, this post will become invisible to the public and only accessible to Henk van den Brink.

Thanks for keeping DEV Community 👩‍💻👨‍💻 safe. Here is what you can do to flag hvdb:

Unflagging hvdb will restore default visibility to their posts.