In computing, a hash table (hash map) is a data structure that implements an associative array abstract data type, a structure that can map keys to values. A hash table uses a hash function to compute an index into an array of buckets or slots, from which the desired value can be found 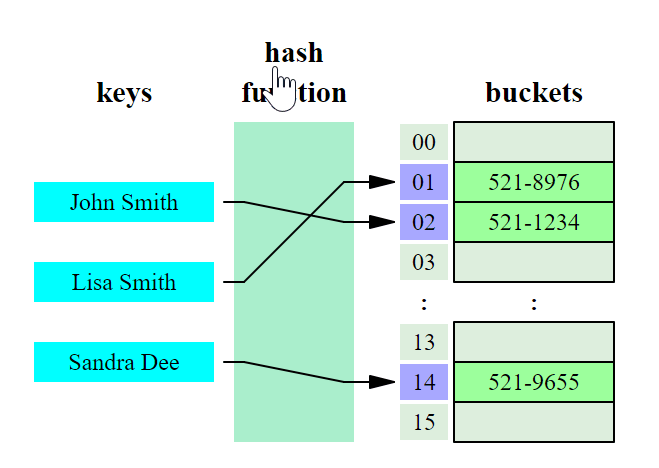 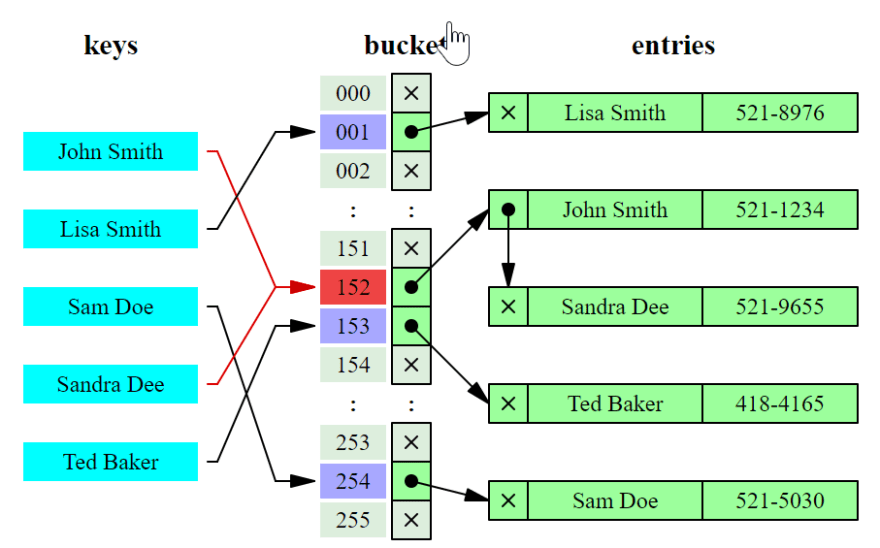 Hash tables combine random access ability with quick insertion and deletion, which makes it an extremely flexible and useful data structure. If you’re doing something other than storing keys and values, or if you need to sort elements or iterate efficiently through them, though, you should use a different data structure.

Note: These features assume the hashtable is sparse.

Hash tables have extremely fast lookup by key (O(1)).
Insertion and deletion of data is also quick (O(1)).
In a hash table, you can use the keys as the data, and use that to check if we've seen an element before. A hash table used this way is usually called a set.

Hash tables have no notion of order.
Hash tables cannot match "nearby" keys or keys that share the same prefix. So a hash table wouldn't be a good choice for checking for words that began with a certain prefix (a trie would be a better choice in that case).
Lookup by value (instead of by key) is O(n).
A hash table loses its strengths when the amount of data in a single bucket becomes large. Lookup becomes O(B), where B is the number of things in the bucket.

In Interviews, Use Hash Tables When...

There is a unique identifier that you use for lookup.
Examples:
Caller ID: Phone numbers are unique and can be used as a key to quickly retrieve a person. Note that we would not use a hash table that found a phone number given a person's name, since many people have the same name.
Car owner information: Using the license plate as a key, you can look up the owner of the car (the value).
You need to quickly determine if an element belongs to a collection. In these cases, you can represent the collection as a hash table with the elements as keys.
Example:
A Scrabble checker: If we want to determine if word is allowed, we could create a hash table valid_words where the keys were the words. We would set valid_words[w] = 1 for all valid words, so checking if word in valid_words is an O(1) operation.
You're dealing with problems about invariants.
Example:
To see if a word has an anagram, we can sort the letters of the string, and use it as a key in a hash table. (This method yields the same key for any two words that are anagrams of one another). The value can be a dummy value (if you're interested in the "yes/no" question of whether a word has an anagram) or an array of strings with the same key (if you are looking for the actual words).

Note: Lookup by value is not supported directly in a hash table. Instead, you'd iterate through all the keys and check for the value you were looking for (an O(n) procedure).

Huy Do
Full Stack SE. I love to build beautiful web apps and learn new technologies.
You will not do it later (most likely) - I'm a procrastinator, I know
#programming #discuss #watercooler #productivity
Side Project Sunday! How's it going?
#showdev #sideprojects #discuss #watercooler
What's the difference between Front-end and Back-end development?
#anonymous #discuss #help

Once suspended, huyddo will not be able to comment or publish posts until their suspension is removed.

Once unsuspended, huyddo will be able to comment and publish posts again.

Once unpublished, all posts by huyddo will become hidden and only accessible to themselves.

If huyddo is not suspended, they can still re-publish their posts from their dashboard.

Once unpublished, this post will become invisible to the public and only accessible to Huy Do.

Thanks for keeping DEV Community safe. Here is what you can do to flag huyddo:

Unflagging huyddo will restore default visibility to their posts.