As a casual Nvidia-on-Linux user, I have had a fair share of problems with my GTX 1050 over the years. Nvidia's relationship with the Linux community is well known, so there is not much more to discuss. With that said, I decided to go with an AMD graphic card (GPU) for my new laptop, in the hope that it can better streamline my experience. However, that is not really the case at the moment, at least on Ubuntu-based distros, 22.04 and onwards.

This article is about my experience enabling my AMD Vega 8 GPU features on PopOS 22.04 (Xorg). Correction to any information provided in the article is welcome!

What are the different layers of drivers in Linux?

Generally said, there are three different layers in Linux.

There is much more about the hierarchy and relationship between the layers, but they are outside of my domain. For the sake of this article, we only need to be aware of their categorization.

When everyone says "AMD GPU works out of the box on Linux", it is because AMD GPU kernel space drivers are open-source and included in the Linux kernel. The three common ones are radeon, amdgpu, and amdgpu-pro. One will be chosen and loaded based on the installed GPU. To check for a currently loaded kernel space GPU driver, use the following command:

Indeed, my GPU worked out of the box, but there was a catch. None of the "advanced" features such as Free Sync, 10-bit color, low latency, etc. could be enabled, at least not in a trivial way. In Windows, these features can be easily enabled using AMD Adrenalin. 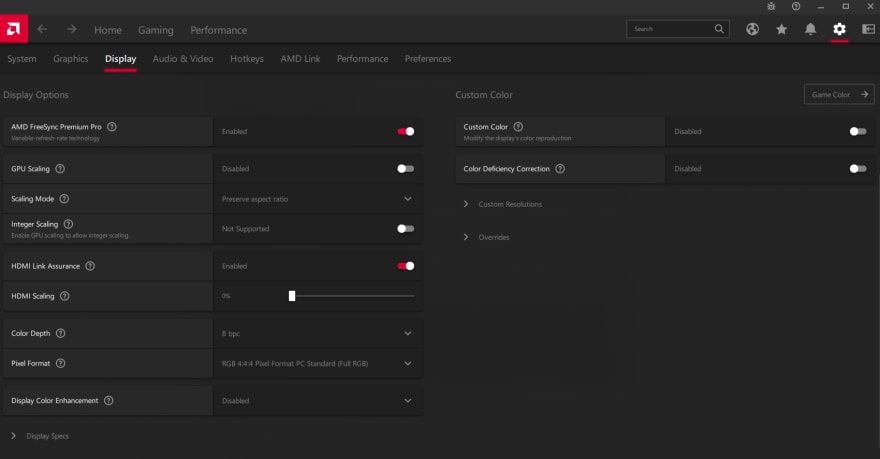 Xorg is a display server that is responsible for all GUI portions of the operating system and is essentially a base of the desktop environment itself. As mentioned, there is a translation layer so Xorg can communicate with graphics API underneath. In absence of vendor-specific DDX, there is a generic xf86-video-modesetting driver for this purpose. It can work with any GPU vendor, but GPU-specific features will be limited. For example, Free Sync on AMD GPU, G-Sync on Nvidia GPU, and so on.

An attempt to enable these features (in /etc/X11/xorg.conf.d/) without a correct DDX installed beforehand may result in a non-bootable device. With that said, to enable my Vega 8 GPU features, I needed to install xf86-video-amdgpu.

On a side note, using apt list --installed showed xserver-xorg-video-<something> on my system. I'm not certain about their relationship with xf86-video-<something>, so any explanation is appreciated.

xf86-video-amdgpu has no official installation instruction

Here is an official repository of xf86-video-amdgpu and it has no installation instruction. I searched around a fair bit and landed on this 2019 article from ubuntulog. That said, the approach does not work for me due to multiple dependency issues such as missing libdrm and gdm3. With that said, my next try is to use an installation package from AMD website. 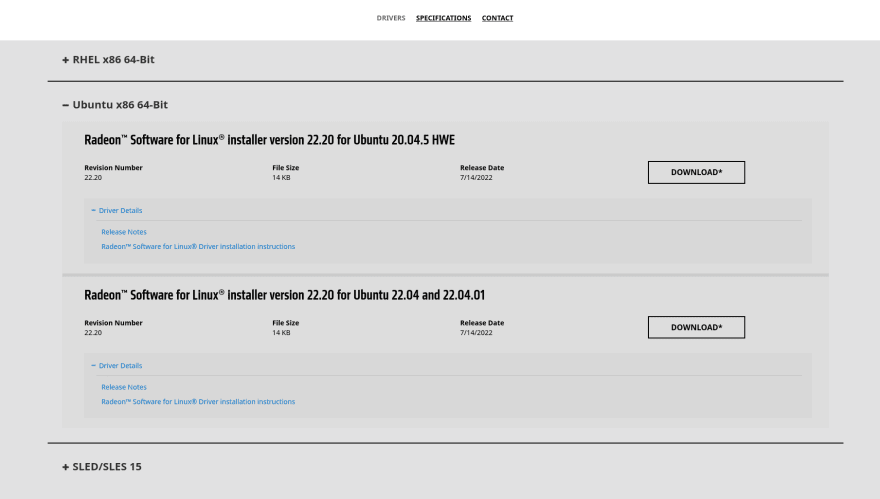 On AMD website, they have a selection of drivers for Linux distros. As PopOS is Ubuntu-based, I decided to use an AMD GPU driver for Ubuntu x86 64-Bit (22.04). It is a deb package, so installation should be easy enough, but no. AMD GPU driver installation process is no less of a rabbit hole compared to Nvidia counterpart (manual installation, not considering PopOS out-of-the-box support for Nvidia GPU).

Problem 1: PopOS is not supported by default

The deb package is just a bundle of installation scripts along with necessary files. With that said, I needed to run the command amdgpu-install afterward to initiate a true driver installation.

The installation does not support PopOS by default. Fair enough, because this is only marketed for Ubuntu (also Debian and Linux Mint, as you will see below), I needed to do some modifications to an installation script, which locates in /usr/bin.

Now the installer could run on PopOS, I ran amdgpu-install and an error below was shown.

After a bit of lookup, it seems like an extra kernel content is included in a standard kernel in PopOS, meanwhile, linux-modules-extra-...-generic is only a virtual package, hence the error. I did try to play around with the kernel, but my machine ended up in a non-bootable state. After making my laptop bootable again, I decided if an installation script can be modified somehow. Therefore, I search for references of linux-modules-extra-...-generic and commented them out.

Great! Now that no installation candidate error went away, but then ...

Problem 3: rocm-llvm has unmet dependencies and does not support Ubuntu 22.04

I reran amdgpu-install, then the error below was shown.

Apparently, rocm-llvm is not compatible with Ubuntu 22.04. I stumbled on two issues discussing this matter ROCm #1713 and ROCm #1730. The installation problem has existed since the initial release of Ubuntu 22.04 in April 2022. Although ROCm v5.3.0 provides support for Ubuntu 22.04, the change has not made into AMD GPU official driver installation package yet.

I did not expect my hands-on experience to become like this, especially on an LTS release like Ubuntu/PopOS 22.04. This was the end of my installation attempt, and I decided to duo-boot into Windows for the time being.

Is AMD GPU a great choice on Linux? I would say it still is. With AMD GPU, basic features are supported out of the box and you can do graphic-intensive tasks on your newly purchased device without issue. However, if you would like to have access to an advanced feature set, or do some specific task like machine learning, then I suppose you will not have an easy time until AMD furthers its support to different distros and patches such broken bugs in a timely manner.

What is your experience with AMD GPU on Linux? Please let me know in the comment section down below.

This article was originally published at Is AMD GPU better than Nvidia on Linux? It depends 🐞
Interested in web development, IT content, and more? My other articles might be helpful to you!

Unleash the Power of Your Data: 6 ES6 Array Functions You Need to Know 🚀

Hung Vu
I write about various topics that I'm currently learning, be it front end, back end, cloud, DevOps, etc., you name it! For any questions you may have, you can reach out to me at: hello@hungvu.tech.
🐞 Fix a WordPress login loop caused by Cloudflare Turnstile and Wordfence 2FA conflict 🐞
#wordpress #tutorial #beginners #cloudflare
🔥AMD's RDNA 3 GPUs are announced, introducing RX 7900 XTX and 7900 XT🔥
#news #watercooler
☁️ Tutorial - Back up data on Microsoft Cloud with Synology Active Backup
#beginners #tutorial #microsoft #azure

Once suspended, hunghvu will not be able to comment or publish posts until their suspension is removed.

Once unsuspended, hunghvu will be able to comment and publish posts again.

Once unpublished, all posts by hunghvu will become hidden and only accessible to themselves.

If hunghvu is not suspended, they can still re-publish their posts from their dashboard.

Once unpublished, this post will become invisible to the public and only accessible to Hung Vu.

Thanks for keeping DEV Community 👩‍💻👨‍💻 safe. Here is what you can do to flag hunghvu:

Unflagging hunghvu will restore default visibility to their posts.