In this post, we'll compare Vue.js vs Angular to determine which framework is best for you.

JavaScript frameworks like Vue are versatile and progressive because they allow code modifications without affecting core features, allowing for the creation of progressive UI components. Due to its high decoupling, Vue also provides opportunities to enhance the functionality of the web application with customised modules and visual components.

Vue ensures that no mistakes are repeated by learning from the ups and downs of Angular and React.

Let us look at the benefits that VueJS provides.

Vue.js utilizes two data binding to synchronise all the data in various components, just as Angular. However, Vue has a special attribute called Prop, which may be assigned to any component that uses one-way data binding.

Vue is completely rebuilt in Typescript and then compiled to Javascript. Therefore there is no need for a web developer or test engineer to learn another programming language, resulting in a smoother learning curve and speedier adoption.

Angular is a typescript-based Javascript framework that allows businesses to build scalable web apps. It is a stand-alone front-end architecture with built-in tools and functions that do not increase the size or performance of the application. Its adaptable code can be used for any deployed target and offers development opportunities across all platforms.

Angular was initially released in 2016, and it was a complete redesign of the 2010 version of AngularJS. The application framework was built by Misko Hevery and the Angular team at Google. The framework is now controlled by the same team as well as other external developers.

Let us look at the benefits that Angular provides.

Angular is regarded as a complete package for web development. It comes with the MEAN stack. MongoDB, a NoSQL database, Express.JS, back-end middleware, Angular, a front-end Javascript framework, and Node.JS, the runtime environment, are all represented by the letters M, E, A, and N, respectively.

Directives were initially introduced in AngularJS, and their usefulness has grown with each release. Developers can use it to extend the functionality of HTML components. The directives control the behaviour and data of DOM (Document Object Model) trees. This improves the productivity of desktop and web apps and contributes to the creation of richer user interfaces.

Angular uses two-way data binding to store the data across multiple layers. A bidirectional data flow between the various components is beneficial. It will ensure that the view components and logic layers are constantly in sync without the need for further work. In Angular, this may be accomplished by utilising the ngModel directive.

Angular is a cross-platform web development framework. Progressive web apps, mobile apps, and desktop applications can be created for the Mac, Windows, and Linux operating systems.

Like other front-end frameworks, the code compiles to JavaScript, but TypeScript provides enhanced navigation, refactoring services, and autocomplete, all of which assist developers in building enterprise-scale programmes with fewer errors.

Many built-in libraries in Angular make it easy for developers to work. The Angular-CLI project includes core libraries such as RxJS. It also includes various API-specific and frontend-specific libraries.

I'll demonstrate a benchmark test created by Stefan Krause so you can see the benefits of utilising each framework. A table with four columns and 1000 rows is displayed in this test. You choose which frameworks to use; I went with Vue-v3.2.37. Angular 13.0.0 and React 17.0.2. 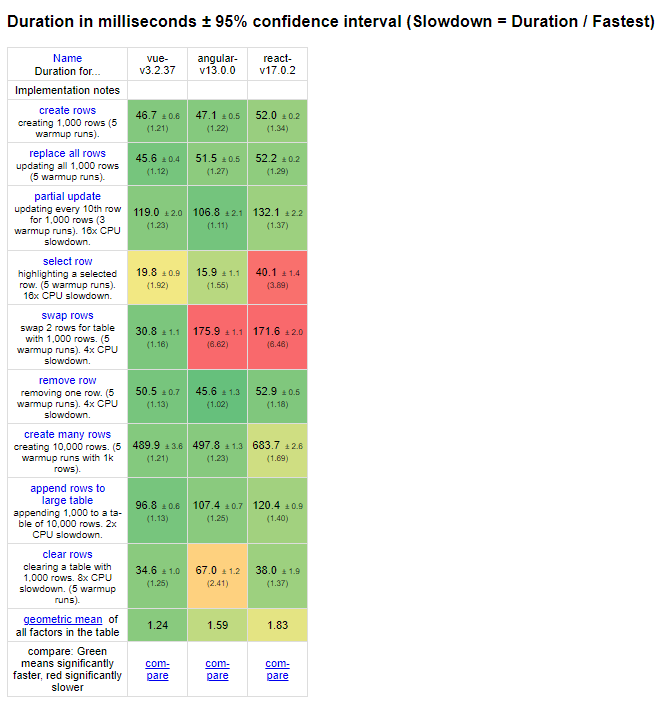 Vue is the fastest framework in this area, followed closely by Angular and React in terms of performance. At the bottom of the table, we can see something called Geometric mean. The geometric mean is a framework's indicator of overall effectiveness and quickness. This leads us to the following category ranking: 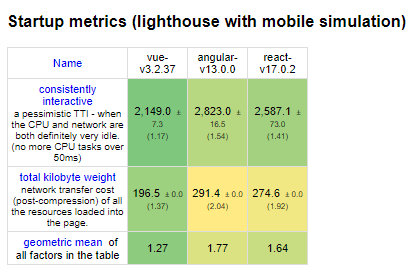 You may see how well Vue performs. React and Vue are just in front of Angular, who is dead last. This leads us to the following category ranking:

The memory test determines which framework consumes the least amount of memory when doing the same test. Let's get right to the findings. 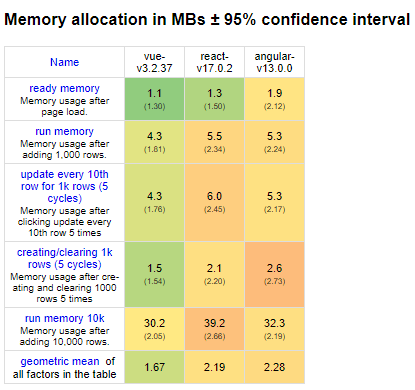 Vue is undoubtedly the winner yet again. Angular and React are close behind, with Angular (once again) performing the worst. This allows us to derive the category rating.

While Vue is more straightforward and intuitive and Angular is more complex and equipped with a wider variety of tools, they both share similar features.

Success will be achieved by selecting the appropriate web framework for the task while keeping your application requirements in mind.

Once suspended, hr21don will not be able to comment or publish posts until their suspension is removed.

Once unsuspended, hr21don will be able to comment and publish posts again.

Once unpublished, all posts by hr21don will become hidden and only accessible to themselves.

If hr21don is not suspended, they can still re-publish their posts from their dashboard.

Once unpublished, this post will become invisible to the public and only accessible to Helitha Rupasinghe.

Thanks for keeping DEV Community 👩‍💻👨‍💻 safe. Here is what you can do to flag hr21don:

Unflagging hr21don will restore default visibility to their posts.