This is the 3rd post in a series that starts here..

Have you ever experienced a Rails app that suddenly and inexplicably delivers dismal response times or becomes completely unresponsive? It can be incredibly confusing, especially when nothing in the environment has changed recently.

Let's look at one of the most common reasons this might happen.

Correctly configuring Rails connections can be complicated. Here's a short video that explains how easy it is to get wrong.

Note that this problem isn't isolated to your primary database either. It's possible to misconfigure any datastore that has limited connections. Postgres, Redis, Memcached, etc...

There are a few aspects of this problem to consider.

Datastores have an upper limit to how many active connections they can reasonably support. System resources typically govern these limits. For example, PostgreSQL defaults to 100 connections while Redis defaults to 10,000. It's possible to override default connection limits. Just be sure you know what you're doing.

Establishing a connection is an expensive and slow operation. Connection pooling reduces overall latency by limiting how frequently connections are set up by reusing pre-established connections.

The deployment configuration plays a significant role. Consider a database with a limit of 40 connections. We'd be at capacity with 2 servers configured to use 20 connections each.

This problem compounds as the deployment becomes more complex. And the challenge isn't limited to the number of servers. We also need to account for the number of processes running per server and the number of threads active in each process.

These are descriptive names, but I think we can do better. Given that Rails applications do more than serve web requests, let's consider some more suitable names before looking at formulas.

We also need to factor in external systems that have access to the database. This adds another variable to consider.

That's all the variables, now onto the formula.

The formula is quite simple. 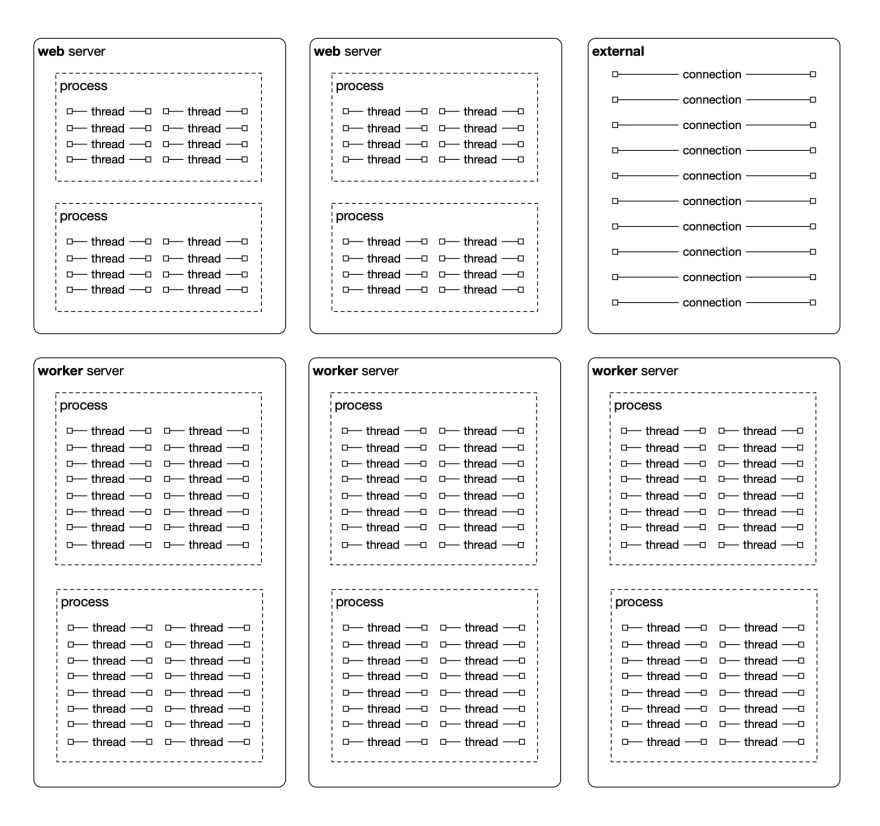 Here's the equation for the number of connections.

It's vital to ensure that you don't configure more connections than are available. You may need to increase the provisioned hardware or reduce the number of connections your application uses.

Here's an example of configuring Rails for the deployment described above.

The formula and configuration may appear simple, but they are deceptively complex. The complexity becomes more apparent as the deployment grows more sophisticated. For example, consider a deployment with multiple worker pools of varying sizes backed by Redis instances with different connection limits. Can you think of other deployment topologies? How does the math work out?

It's possible to stack connection pooling with tools like pg_bouncer, which can help further ensure your Rails application doesn't exhaust database connections. Heroku supports this with a buildpack.

The number of processes and threads can be hard to determine when using tools like Sidekiq swarm. Just pay attention and ensure that you know what the number is.

Once suspended, hopsoft will not be able to comment or publish posts until their suspension is removed.

Once unsuspended, hopsoft will be able to comment and publish posts again.

Once unpublished, all posts by hopsoft will become hidden and only accessible to themselves.

If hopsoft is not suspended, they can still re-publish their posts from their dashboard.

Once unpublished, this post will become invisible to the public and only accessible to Hopsoft.