This article was originally written by Julie Kent on the Honeybadger Developer Blog.

This article complements ‘Understanding How Git Works’. Now that you have an understanding of the plumbing, it's time to level up your skills. Hopefully, these tips and tricks will increase your efficiency and productivity as a developer. It will help you spend more time coding and less time trying to decide whether to git merge or git rebase. Without further ado, let's get into it!

Have you ever found yourself making a small tweak to the README so that you can kick-off a build (or some other integration) and try to debug an issue? I used to do this fairly frequently, until I found out about the following command:

This allows you to trigger a commit and kick off a workflow without having to make a trivial change to a README or some other file.

This one is more fun, and sometimes, adding a bit of color does help our eyes and brain read what's on the screen better.

Here's an example of what you can expect:

8. Clean up your local branches

If you're like me, you enjoy keeping things tidy, and this includes your computer. :) I fell in love with the git config setting, which deletes local branches that have been removed from the remote when doing a fetch or pull.

Similarly, you can delete local branches that have been merged into the master by running this code:

Using git rebase is an extremely valuable command, but sometimes, you accidentally rebase away a commit and start sweating. Or, maybe that's just me. :) git reflog to the rescue! As long as you've committed your work, it still lives in your local working copy. Using git reflog, you can find the SHA1 that you need something from. Then, run git checkout <SHA1>, copy what you need, and run git checkout HEAD to return to the most recent commit in the branch. Crisis averted!

There's a bug, and you can't figure it out. Sometimes, you want/need to reach out to the person who wrote the code that does not appear to be working. You run git blame, which will show each line's last commit change and who changed it. Cooooool, but ugh, running git blame just doesn't feel very nice. Good news! You can change the alias using this command:

git config --global alias.investigate blame (You can change investigate to whatever word you'd like)

Sometimes, I get carried away to the point that I realize I have way more changes in a file than make sense to commit together. I recently learned that you can use git add -p to selectively organize your commits. Here is an example: 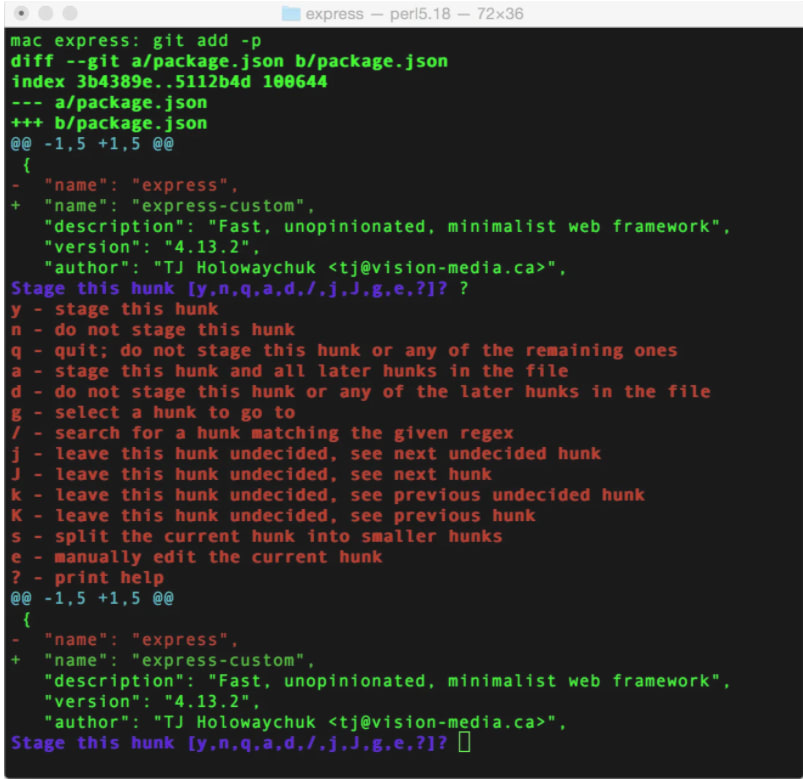 4. Speaking of that p flag

It can also be used with git stash when you don't want to stash all files or the entirety of one file with changes. When running git stash -p, you will see a similar interactive screen as git add -p

This is more of an advanced tip. If you haven't heard of git bisect yet, I recommend reading this blog post. After reading the blog post, you’ll know that using git bisect can require a lot of commands, which can limit its usefulness. Because of this complexity, you might be compelled to write a script that can automate some of this process. You can then use this nifty command to run your script.

You can include a number of arguments. Read more about git bisect and how to use the run command here.

Make use of emojis by bookmarking this cheatsheet.

I'm always amazed by how quickly I forget about the built-in help tools within a number of applications and CLI's. I'll be trying an endless number of Stack Overflow answers to solve my problem, and finally, I'll remember

You essentially have all of the Git documentation at your fingertips! If you're completely new to Git or just want a nice refresher, you can even run

which will run you through the basics.

Finally, if you want to get documentation for a specific command, you can run, for example, man git-log if you want to know more about the git log command.

Well, there you have it! I hope that you've at least come across something new that you didn't know before or refreshed your memory about a command you might have forgotten about. Git is an amazingly powerful tool, and we should make the most of it!

Honeybadger has your back when it counts. We're the only error tracker that combines exception monitoring, uptime monitoring, and cron monitoring into a single, simple to use platform.

Our mission: to tame production and make you a better, more productive developer. Learn more

Most Important Things to Learn other than Coding...

What are some things that you don't like about git?