This article is based on Neovim 0.4.4 without the new LSP!

During first years of my software engineering career I noticed that most of my co-workers were using Fedora, Ubuntu, Manjaro etc. distros on their machines. That raised my interest enough to start exploring the opportunities on the Linux side of things, since before this I had only Windows or MacOS machines. I decided to first try out Fedora on my personal home PC and install it alongside of Windows 10. The first impressions were just like "Okay, this looks nice" and installed VSCode along with other tools I used back then. After a while I was intrigued of the productivity side of things. Some folks were using VSCode, Vim, Emacs etc. and I read a lot of articles of how using (Neo)Vim can boost your productivity and be blazing fast when working with code.

That was about 7-8 months ago, and during the last 6 months I've been tweaking my setup to become even more productive. Today I'm sharing my own development environment with you with all the dot-files so you can also try it out! For each tools I have listed the reasons I use that particular tool.

Note: This is the setup what I use everywhere and is my personal configuration

Background and what I do

As a software engineer I do web development for most of my time. This includes front- and backend development, Terraform scripts, CI configuration via yml-files etc. Below is a few key technologies what I use 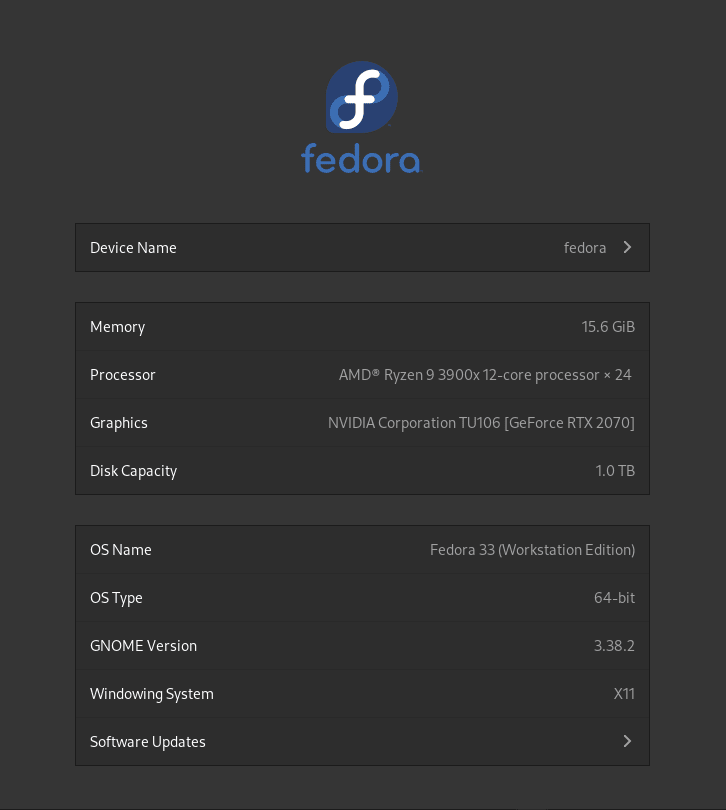 This was kind of obvious thing. I really like how every Fedora release brings something new on board and does it very well. So far I have not countered any bugs and the last upgrade from 32 to 33 went smoothly. The actual key things for me in Fedora was that it offers built-in OCI image support, is built for developers in mind and has many open source tools available. The Gnome desktop environment sits like a glove for me. Some say that it is slow and buggy, but personally I like it a lot.

Also, I use Nvidia graphics card and for some distros it is just pain to install any Nvidia related stuff, but for Fedora it just works and there are good community support and guides for it.

And as a Theme for Fedora I use the dark theme which comes along with fresh Fedora installation. I haven't installed any Gnome plugins since personally I'm okay with the default shortcuts for handling windows, moving between workspaces and arranging stuff in general.

Before Alacritty I had only used the default terminal emulators on MacOS and Fedora, and also iTerm on MacOS. I came across to Alacritty on some blog post or article that I read half a year ago and thought this is nice maybe I should try it out, so I tried. The main selling point for me was that Alacritty is GPU accelerated terminal emulator which means it should be blazing fast. It is also cross-platform so I can use it everywhere (Linux, MacOS, Windows etc.).

Below you can find my Alacritty configuration file

ZSH and Oh my Zsh

For a shell I use ZSH, which I picked up when I was using MacOS and have used it since. It is stable, easy to configure and the Oh My Zsh is wonderful with its themes. Can't really say anything from the other like Fish or Bash, but ZSH has been working fine so I see no reason to change to other!

I'm not going to paste my .zshrc here since it has so little modifications it. Basically I have just changed the theme to agnoster, set my default editor to Neovim and put some aliases which you can find below.

This is relatively new tool for me also, I recently find it out since I had problem installing the newest version of Elixir to my machine and the official Fedora repositories had only up to 1.10 or so.

I use this tool to manage all the versions of the programming languages and runtimes I use. It has a simplistic CLI and has all the configuration options I need. For example if you have installed Nodejs versions 12 and 14, you can temporarily set version 12 to one shell session if you are working with older project which uses version 12. This makes it really easy and handy to use in different situations. It supports all the major programming languages and I have had 0 issues with it. I Definitely recommended to use this piece of software!

Tmux is as far as I know the most used terminal multiplexer (I base this assumption to Github stars). It comes pre-installed in Fedora and has handy shortcuts. On the first sight when I started to use Tmux I was kind of confused how this should make my life easier since I can have just two separate terminal windows, but after a while I realised that I can split the terminal window in to multiple terminal windows which you can detach and let run in the background, move between Tmux screens/pages etc.

Along my studies and career I have used multiple different editors from CodeBlocks(yes, we used this on our first programming course for C) to VSCode and none of those have ever felt so comfortable to use as Neovim. At some point of first thoughts about Vim I decided to try it out and shortly after I realised that the learning curve is steep and went back to VSCode. After reading few articles of Neovim, I decided that now is the time to make the transition from VSCode to Neovim. First I struggled with the different modes, movement etc. but after a while I get used to it and nowadays if I switch back to VSCode or to some other editor, I'm totally lost because they don't have any of the remappings and shortcuts what I have when I use Neovim.

For managing plugins I use the vim-plug since it is minimalistic and supported among the plugin developers. Below is a list of plugins from my init.vim and every plugin or plugin group has a comment above which explains what it brings to the table.

The rest of the init.vim

init.vim - rest of the file

I'm using CoC since I'm still on Neovim 0.4.4, and when Neovim 0.5 gets released I'm going to move from CoC to the built-in LSP. Nevertheless, below is my coc-settings.json since there is some language specific configurations.

As seen, I have enabled to codelens, set manually path to ElixirLS since I have built it from source, configurations for Terraform LSP and set format on save for specific languages. 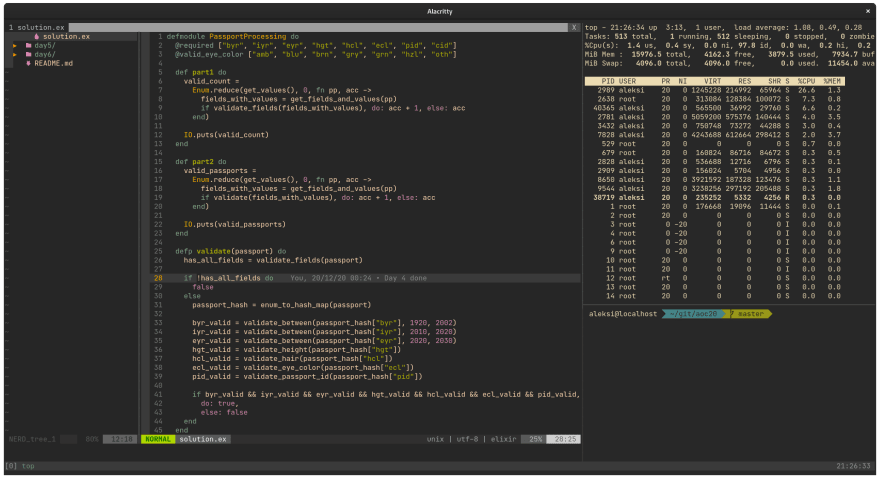 So there it is, my development configuration for general web development and how it looks. It is not complete yet, since I think there is always something you could do better or more efficiently, but till now it's good enough.

Hope this helped you to make your current development environment better, thanks!

Opening a link in a new browser tab using HTML

The World Of React Events | Day 10