Despite tech salary increases this year, many employees feel their pay does not reflect increased costs of living. According to Hired’s 2022 State of Tech Salaries report, 42.3% of remote respondents and 29.1% of local respondents surveyed feel their salaries have not matched the pace of rising inflation and living costs. Many have explored relocation already. So, if you’re a tech professional, should you stay or should you go?

How Far Does Your Salary Take You?

Let’s say you’re a software engineer living in the San Francisco Bay Area and earning an average tech salary of $176,000. Seems solid, right? Then you take into account the cost of living (COL) there and things take a turn.

After adjusting average salaries on the Cost of Living Index, we find earning that same salary in San Francisco is equal to making $223,729 in Atlanta. Relocation becomes an attractive option when it is clear earning power is different across markets. If you move to Atlanta, it’s like getting a $47,729 raise!

Perhaps you’ll consider Texas, where there are the second and third highest average salary markets in 2022, after adjustment for COL. Your San Francisco salary is the equivalent of making $216,000 in Austin and $211,000 in Dallas.

Should You Consider Relocation? 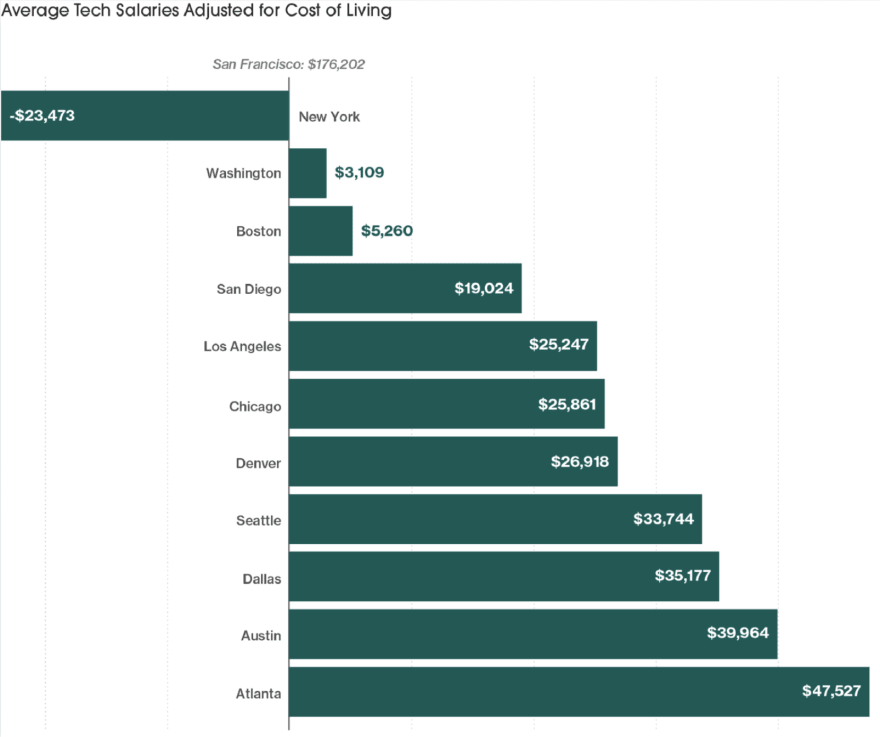 So, will you stay or will you go? 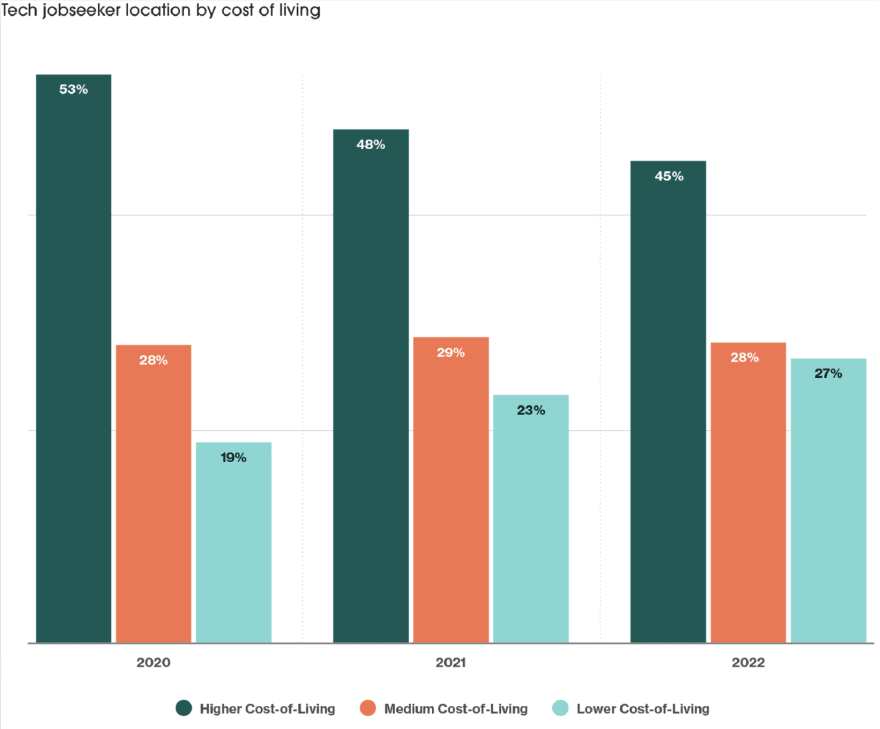 Tech workers are increasingly distributed across the country thanks to remote work. A recent study from Brookings Institute found tech “superstars” like Seattle and San Francisco metropolises are seeing slower employment growth compared to “rising stars” like Atlanta and Dallas. As for “the rest,” or the other 83 metro locations studied, these areas saw tech employment grow faster in 2020 throughout the pandemic.

Inflation Grows No Matter Where You Relocate

Since the pandemic dramatically increased the ability to work from home (or anywhere) tech workers moved away from higher cost of living areas. In some cases it was practical. There was no longer a need to live in a higher cost of living area or they wanted a larger home to accommodate sometimes multiple home office spaces. Others moved to be closer to family, or simply because they were free to live in places they’d always wanted to.

It’s little surprise then, that most candidates still prefer pay based on their role. Only 20.2% strongly agree that pay should be determined by location or local cost of living.

Between growing costs of living and higher inflation rates, tech professionals may want to explore relocation. Shedding light on how far salaries can take you across locations does offer some guidance in knowing whether you should stay or go.

Check out the new State of Tech Salaries Report for more insights into location trends and the current hiring environment in tech.

Ready to find your dream job? Create your free Hired profile to employ your potential.

This post briefly outlines the top 10 neat tricks you can use to level up your logging experience.

Once suspended, hired will not be able to comment or publish posts until their suspension is removed.

Once unsuspended, hired will be able to comment and publish posts again.

Once unpublished, all posts by hired will become hidden and only accessible to themselves.

If hired is not suspended, they can still re-publish their posts from their dashboard.

Once unpublished, this post will become invisible to the public and only accessible to Hired.

Thanks for keeping DEV Community 👩‍💻👨‍💻 safe. Here is what you can do to flag hired:

Unflagging hired will restore default visibility to their posts.