In the current software development era, Selenium test automation is extremely important and makes up an inherent part of the software development cycle. It helps to build software that is tested continuously while being developed in the form of separate small individual units and a whole integrated set as well.

While Selenium is the most popular choice for automation testing, everyone wants to use the best possible technologies for better results. Amongst the programming language, NodeJs has made a spot for itself as a preferred one to be used along with Selenium to give best results for Selenium test automation. 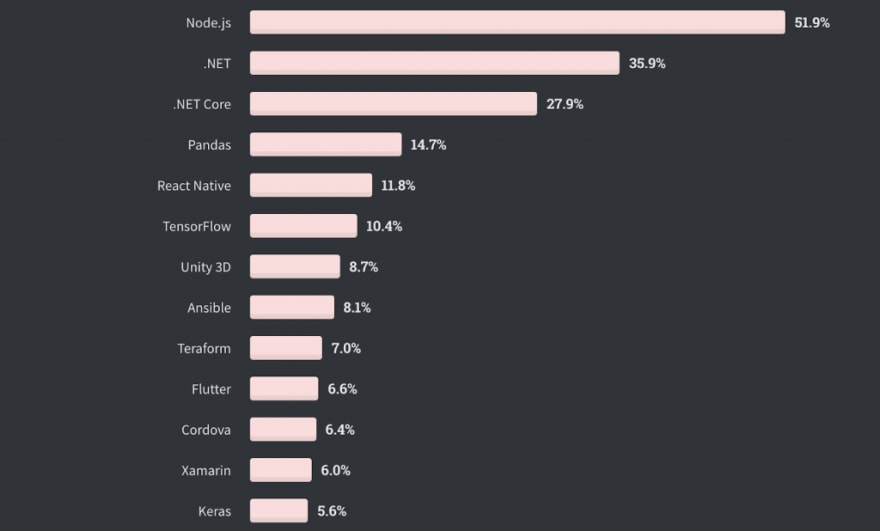 In this tutorial, we will start with some basic introduction to Selenium and NodeJs and why they make such a good solution when used together by using one Selenium NodeJs example. Let’s go!

Why Selenium and NodeJs For Web Automation Testing

Selenium is widely used in automation testing for web applications as it is an open source and widely-used cross browser testing tool. It provides support for almost all top browsers available like Chrome, Firefox, Opera, Internet Explorer and more. It can be integrated with almost all popular programming languages, automation tools, and libraries with the same ease making it a preferred choice for Selenium test automation.

In addition to their independent usefulness for the purpose of writing automation test cases, Selenium NodeJs make a very wonderful combination as both are easy to implement. Also, the implementation with Selenium and NodeJs can be kept in a single repository, thereby enabling developers to run it without any additional setup. They can also contribute if required.

Prerequisites to get started with Selenium and NodeJs

Here are the pre-quisites for getting started with Selenium and NodeJs:

Setting up node and npm

Note : Incase you already have node and npm installed on your system, just update them to latest version using following

Now that we have installed node and verified it, let’s create a npm project directory which we will be using to add automation tests. For this follow these simple steps

Note: Running init command would throw a bunch of questions at you regarding the setup information. For starters, keep everything as default and submit.

Once all information is gathered by system, it will generate a package.json file for you in the directory. This is a config file that we can customize as required as we proceed with developing our automation.

Here’s a snapshot of how it will look like initially :

Once we are done with setting up node(s), next would be to install a framework to work with Selenium and node together. For this navigate to your project folder, selenium-node-automation-project and execute following command

Once this is installed, we download drivers for the WebDriver to interact with the specific browser under test. In this tutorial we will be downloading drivers for Firefox and Chrome as they are mostly used and can function with mostly all major operating systems.

You can download the latest GeckoDriver (for Firefox) from here and Chromedriver (for Google Chrome) from here. Next unzip them into some location/directory which is easily accessible and copy the absolute path for both the drivers and add it to your system’s PATH variables.

Having configured node and Selenium for Selenium NodeJs example, let us try to run a simple program to verify the setup. For this create a file test_setup.js inside the project folder, and add this code to it.

And execute it with following command

You should see the Chrome browser getting instantiated and redirecting to Google.

Selenium test automation is not helpful if it’s not having any asserts, as they inform us and help verify whether the functionality is working as expected. Mocha is an assertion library used to put asserts and verifications in our Selenium node automation tests and, if required, can be used to run tests.

To install Mocha, run the following command inside the project folder

We will now modify our test_setup.js file to verify setup with Mocha before writing the first test case in complete formatted structure.

If this test passes, our setup is all good and we are ready for executing our first automation test case as a part of Selenium NodeJs example.

LambdaTest is a cloud-based cross browser testing platform that allows users to perform automation tests at scale. The platform provides an Online Selenium Grid that supports multiple automation testing frameworks and enables users to run tests in parallel across 2000+ browsers and operating systems combinations. Along with running tests at scale, it also expedites the process of test automation as Selenium tests can be run in parallel across different browser & OS combinations.

You can also perform live interactive testing infrastructure, integrate with most loved CI/CD tools, project management tools, and get detailed analytics of your tests on the LambdaTest Dashboard.

selenium-node-automation-project already consists of package.json which will be modified as per our requirements. Other than that we will add 2 more folders to this: conf and tests.

Let us now get our hands dirty with implementation and proceed further with this Selenium NodeJs example:

As evident from line number 20, the sample test is of parallel test execution.. We have used a forEach loop to traverse through each capability and run cases on different browsers.

To make it run for a single case, we just need to remove this function and then the applied capability would be of a single browser (and OS combination).

This folder contains configuration files for running single and parallel test cases which contain all the necessary capabilities in form of key value pairs. It also contains your LambdaTest username and access key to run and map the results on the dashboard as per the given capability set. You can obtain the user-name and access-key from the LambdaTest profile page. 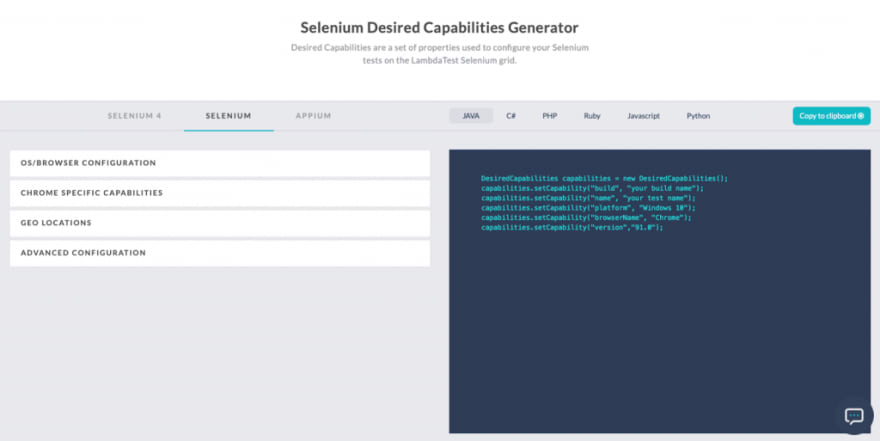 Here are the generated capabilities generated for the demonstration of Selenium and NodeJs: 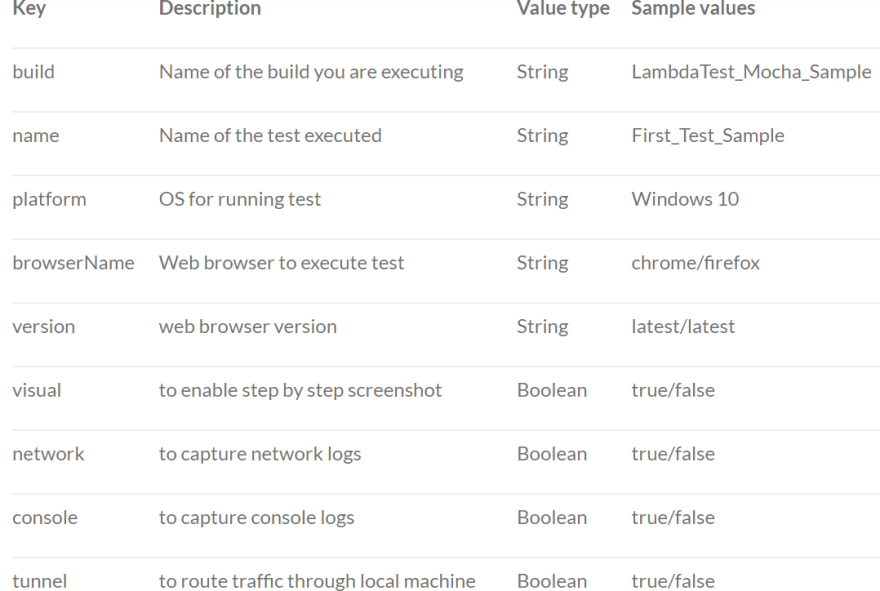 The dependencies for the script and project are kept in package.json. Selenium 4.0.0-beta.3 is used for demonstrating this Selenium NodeJs example. Do check out our blog on What is new in Selenium 4 to gather understanding about the advantages of the same.

The folder structure needs to be tailor-made as per the project requirements.

Once the basic setup is completed, run the following command to install those dependencies:

We are now good at executing our first Selenium NodeJs example. The LambdaTest dashboard will be used to verify results of the test execution. In order to run the test files run following commands

To demonstrate parallel testing with Selenium NodeJs, we will be executing the parallel test file. As mentioned earlier, the tests would run on the latest versions of Chrome and Firefox browsers.

Once you run the command, it will give you the following output on terminal

Next navigate to the LambdaTest automation dashboard to verify the execution details. As shown below, you will see the executions categorized in different sections: 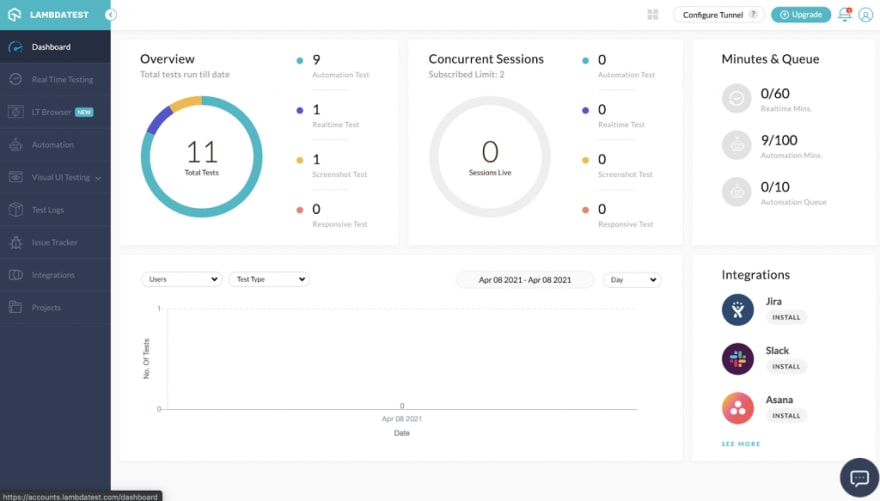 Under the Automation tab, you can see the execution of your tests, its timeline, automation logs related to the execution, and more. 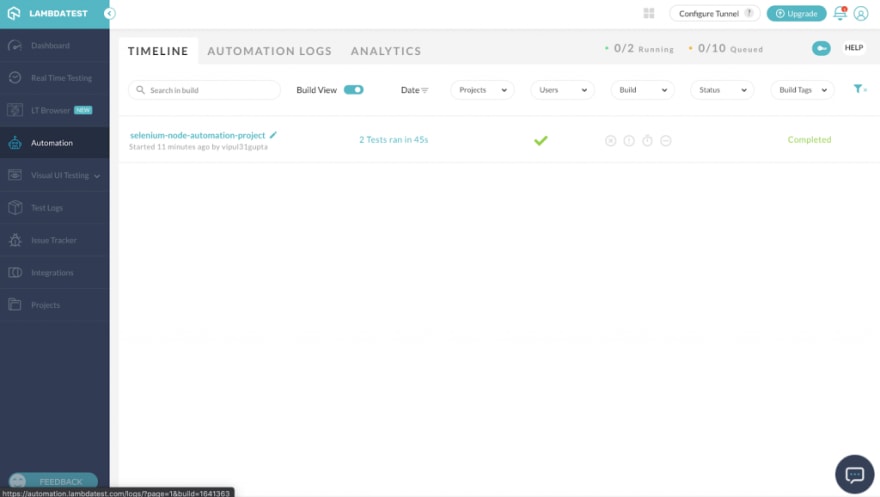 You can find all comprehensive and detailed information about the test case executed on this dashboard.

In this tutorial, we learned why Selenium and NodeJs are a preferred choice for Selenium test automation, understood the prerequisites to set up the system and demonstrated our first case execution on cloud Selenium Grid. For enhanced scalability, and performance it’s recommended to run your automation tests on cloud testing platforms like LambdaTest. So now it’s time for you to try out Selenium NodeJs testing!

Google map loader api, how to include libraries like places

The useEffect hook in React 18 has a peculiar behavior.

Once suspended, himanshusheth004 will not be able to comment or publish posts until their suspension is removed.

Once unsuspended, himanshusheth004 will be able to comment and publish posts again.

Once unpublished, all posts by himanshusheth004 will become hidden and only accessible to themselves.

If himanshusheth004 is not suspended, they can still re-publish their posts from their dashboard.