The confusing part of animations

Adding animations is not always necessary to create an app, but there are still plenty of opportunities to write them.

I have implemented animations quite some time. And still, every time I write, I am baffled by how to implement animations.

In this article, I'll try to sort out some of the areas that personally confuse me.

If you look for articles on animation, you will often see classes called AnimatedXXX and XXXTransition. These classes are used to simplify the handling of certain animations.

However, these classes have always baffled me.

For example, if I want a widget to fade in, I can use either AnimatedOpacity or FadeTransition to achieve a fade-in animation.

So what's the difference? And when should you use which?

AnimatedXXX and XXXTransition classes support a variety of animations other than fade-in animations, and each of them has a corresponding class in both classes.

These two groups of classes inherit from separate parent classes, ImplicitlyAnimatedWidget and AnimatedWidget.

(Google's engineers also called them this way, so it should be reasonable.

Please keep in mind that these are not the actual class names.

How are they different?

Difference between the two groups is simply whether or not they contain an AnimatedController.

Let's write a widget that changes scale in both class

In Implicit widgets, you pass the variable you want to change (scale in the above example) and duration.

When you change the value of the variable to other value, the widget will animate the widget from starting value to changed value with defined duration.

In Transition widgets, Animation is created from AnimationController and Tween just as previous examples. It is passed as an argument.

Similarly, AnimationController is manipulated to fire the animation.

When to use which?

Now that you know the various classes involved in animation, how do you know which one to use?

It all depends on how complex you want to make your animation.

The following diagram, which is from two years ago, was created by an engineer at Google. 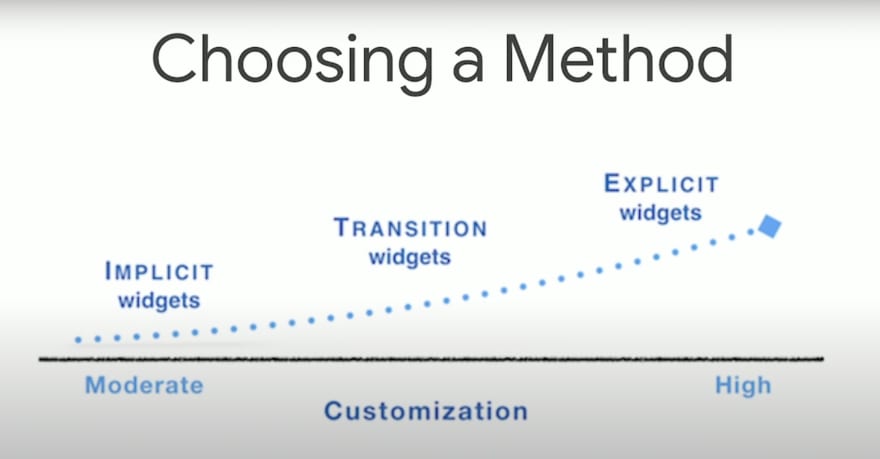 The more you go from left to right, the customization freedom and complexity rises.

Explicit widgets in the diagram represents a use case where defining your own AnimationController, Tween, Curve and Animation and wrap them in an AnimationBuilder.

1.You want to animate to multiple values

Implicit widgets will do a nice job of animating from the current value to the new value you pass in.

This is more flexible than using a Tween where you have to define the end value in advance.

2. For animations that only forwards

Therefore, it is not possible to "forward and reverse" or repeat animation with a single trigger.

Having said that, Implicit widgets is more suitable to animation that animates from the start value to the end value only once.

1.You want to create complex animations using TweenSequence or Interval

Transition widgets allow you to define your own Animation, so you can freely define a sequential animation using TweenSequence or a chain of animations using Interval.

You cannot define such complex animations with Implicit widgets.

2.You want to do complex animation operations such as repeat

As mentioned above, Implicit widgets can only perform forward operation, so you need to use Transition widgets if you want to perform repeat or forward and reverse animation operations.

For more complex animations
In addition to the above, if you want to add multiple animation effects to a widget, it is better to implement in Explicit ways, preparing AnimationController, Tween, Curve and Animation by yourself.
Otherwise you will need to wrap it with multiple Transition widgets, which will reduce readability.

2. You can generate Animation with both drive() and animate()

In other words, you can generate Animation from both the AnimationController side and the Tween side.

This was very confusing when learning animations for the first time.

When to use which?

Two methods returns exactly the same result (Animation), so honestly, it doesn't matter whichever you use.

When considering, it should focus on "How many AnimationController and Tween are needed to achieve the desired animation?"

For example, the following code applies multiple animation effects to a single widget

In such a case, since there are multiple Tweens for one AnimationController,
using animate method will make it easier to see from which tween, Animation is generated from.

On the other hand, when AnimationController and Tween are one-to-one, you can use either one.

However, the above is just my personal opinion, so you can decide which one to use according to your preference.

The existence of similar classes are another reason why animation can be confusing.

As you can see from the names, classes seems to be a combination of one of the main animation players such as Animation, Curve, Tween, etc.

It can easily get confusing understanding the difference and how and when to use which class.

For example, the following codes are written in different ways, but they all achieve the same animation.

You would also find some examples which passes AnimationController directly, instead of passing Animation.

Looking at all these different ways of writing animations, it is easy to get confused about how the classes are related to each other.

In such a case, it is recommended to classify each class by what parent class it inherits from. 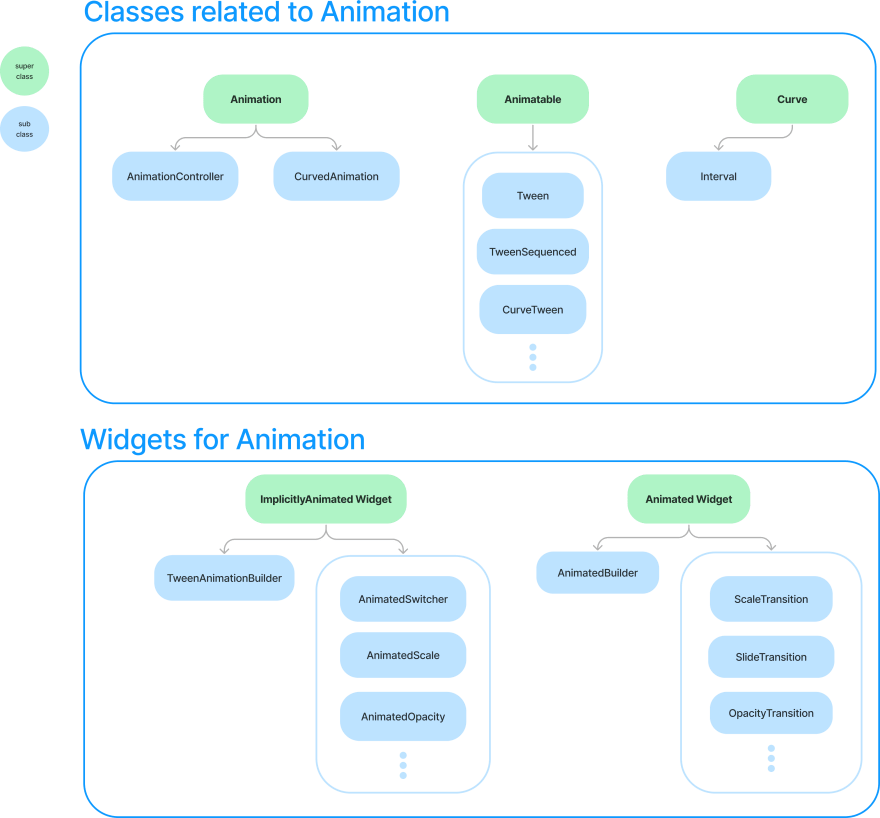 Because there are so many different classes, Animations can be overwhelming at first. But if you understanding the things described in this article, I think you will get much familiar with animations.

I hope these series of articles will help you understand animation a little better.

Once suspended, heyhey1028 will not be able to comment or publish posts until their suspension is removed.

Once unsuspended, heyhey1028 will be able to comment and publish posts again.

Once unpublished, all posts by heyhey1028 will become hidden and only accessible to themselves.

If heyhey1028 is not suspended, they can still re-publish their posts from their dashboard.

Once unpublished, this post will become invisible to the public and only accessible to heyhey1028💙🔥.

Thanks for keeping DEV Community 👩‍💻👨‍💻 safe. Here is what you can do to flag heyhey1028:

Unflagging heyhey1028 will restore default visibility to their posts.