Here is the writeup for the room Investigating Windows 2.0.

This room is the continuation of Investigating Windows.

What registry key contains the same command that is executed within a scheduled task? 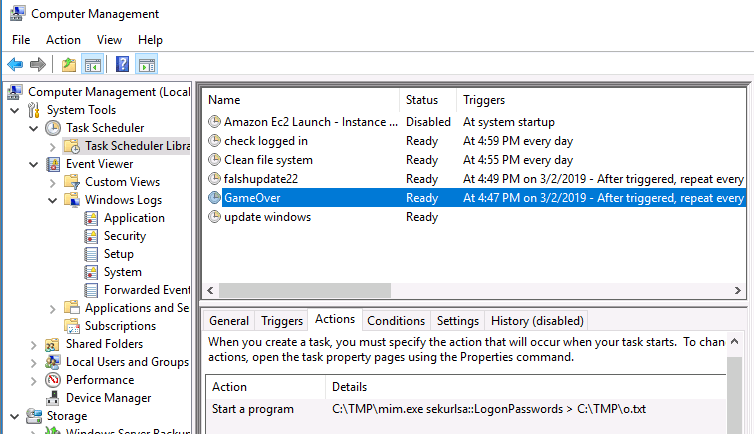 From Regedit, search for the task (e.g. sekurlsa or LogonPasswords). You'll end up there:

What analysis tool will immediately close if/when you attempt to launch it?

To get a good overview of the running maching, The SysInternals tools are the way to go. However, the famous process explorer refuses to start :

What is the full WQL Query associated with this script?

For this one, start Loki, the IOC scanner. It can take a while to run but it is super useful. It detected some suspicious/malicious files and gives us the culprit playing with procexp64 through WQL queries:

What is the script language?

What is the name of the other script?

We'll have to read/understand the script to find this one. Loki also found it:

What is the name of the software company visible within the script?

We can read it within comments:

What 2 websites are associated with this software company?

We can also read the two URLS within the script comments:

Search online for the name of the script from Q5 and one of the websites from the previous answer. What attack script comes up in your search?

What is the location of this file within the local machine?

Which 2 processes open and close very quickly every few minutes?

By looking at the window titles:

What is the parent process for these 2 processes?

We can start the SysInternals Process monitor procmon64.exe. The we can add filter on "Process Name" to mim.exe so we capture the process creation. In the properties of that event, we have the parent PID which is 916. In task manager, we can get the name for the pid 916 which is:

Again in the process monitor, we can capture the first opertion made which is:

Inspect the properties for the 1st occurrence of this process. In the Event tab what are the 4 pieces of information displayed?

Go back to the event properties:

Inspect the disk operations, what is the name of the unusual process?

The hint tells us to use Process Hacker. 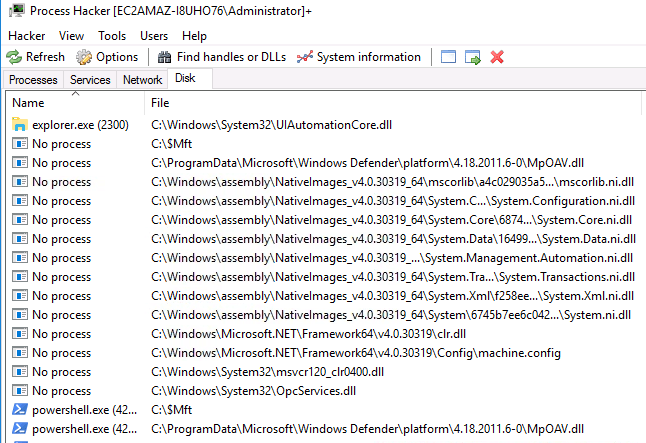 Run Loki. Inspect the output. What is the name of the module after Init?

Regarding the 2nd warning, what is the name of the eventFilter?

For the 4th warning, what is the class name?

According to the results, what is the description listed for reason 1?

Which binary alert is marked as APT Cloaked?

What are the matches?

Which binary alert is associated with somethingwindows.dmp found in C:\TMP?

Which binary is encrypted that is similar to a trojan?

There is a binary that can masquerade itself as a legitimate core Windows process/image. What is the full path of this binary?

Remember pid 916 under name svchost? Loki raised an alert for a svchost located at:

What is the full path location for the legitimate version?

Svchost is a system process that can host one or many Windows services. It is lcoated at

and on the THM maching:

What is the description listed for reason 1?

Look at the corresponding DESC section:

There is a file in the same folder location that is labeled as a hacktool. What is the name of the file?

Next to the malicious svchost.exe, there is a strange javascript file:

What is the name of the Yara Rule MATCH?

Loki raised a warning for that file, with the rule:

Which binary didn't show in the Loki results?

Complete the yar rule file located within the Tools folder on the Desktop. What are 3 strings to complete the rule in order to detect the binary Loki didn't hit on?

We'll have to complete the strings (regular expressions) of the provided yara rule. We can help ourselves with strings64.exe from SysInternals suite to test our regexps through findstr :

This room was fun, I hope there's a 3.0 at some point! Congrats to heavenraiza, the creator of that one.

Why AWS is Better than Other Cloud Platforms

What is C# Used For? Different Uses Of C Sharp Programming

Difference between Mixin and Placeholder in SASS