Any business, whatever size or industry, runs on information. A persistent challenge for the DevOps team is finding faster, easier and better ways of getting information into the hands of business users when and where they need it. This used to require using a business intelligence (BI) solution or running custom queries against the database. What if it were as simple as asking a chatbot? No need to worry about reports or queries. The chatbot can answer a question right there in the channel where your whole team can see it.

Kajabi, providers of a digital product delivery platform, solved this problem by developing a simple chatbot to answer business questions. Anyone from the engineering or marketing team can get the latest data simply by asking the chatbot. It’s smart enough to look up data in the database to answer questions.

The following diagram shows how the solution works. When the chatbot receives a message from a Slack user, a request is sent to a pre-established dataclip, which responds with real-time data fetched directly from the production database. The results are displayed in the chat window, nicely formatted for the user. Once the chatbot is set up, new requests are easy to create and share with the relevant business audience for their use. 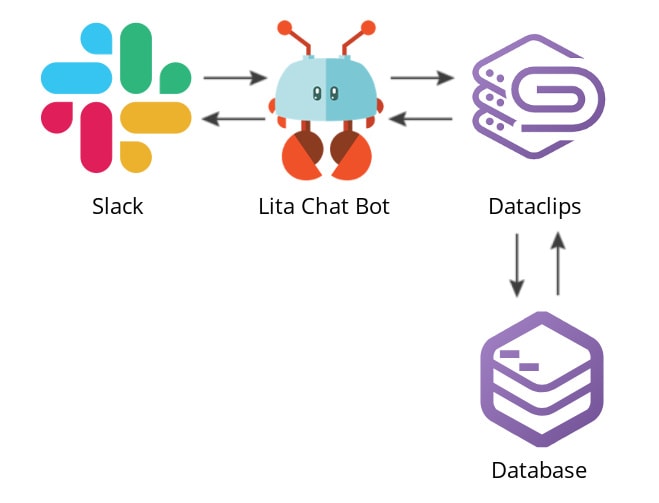 A cost-saving alternative to BI and dashboards

The chatbot approach offers an alternative to writing ad-hoc analytical queries and creating an entire infrastructure to expose them. Most companies address the demand for timely business data with full-fledged business intelligence solutions or by building dashboards that end up being web applications—both of which are very costly in terms of development and maintenance.

Dashboards require the DevOps team to deploy, maintain and upgrade your application and databases, while the development team is forced into updating the pipeline as well as adding features down the line to satisfy the more complex use cases. People also have to look at a physical dashboard in the office or pull up a separate report to see the latest results, which limits visibility.

A chatbot makes the data instantly visible to your team right in the chat room where everyone is already looking, both in-office and remote staff. When you are discussing a topic and have a question, you can see and share that insight with everyone in the group. There’s no need to click a link to open up a separate report. Now business users in marketing, finance and operations, for example, benefit from ready access to insights they need to help the company grow.

Furthermore, instead of creating custom data dumps and reports, this frees up the DevOps team to work on higher value projects. It will take time to initially set up the chatbot, but adding additional prompts is relatively quick.

How to create your own chatbot

Lita makes it easy to create your own chatbots using Ruby. It can query data from the database using a dataclip. With Dataclips, anyone on your team familiar with SQL can easily create reports against live production data and securely share the results within your organization using a unique URL. The chatbot component makes it easy for business users to run the queries against Dataclips. The chatbot extracts the results from that URL and displays it within the Slack conversation.

With this tutorial, you’ll learn how to replicate Kajabi’s setup by creating a chatbot that can access your databases through Dataclips and provide your end users with relevant insights.

In this tutorial, our example business is tracking clicks from various sources, including social networks and websites. The dataclip will be used to provide the top sources of clicks. This step of the tutorial assumes that you have access to a Heroku Postgres database.

If you are missing a schema to run analytical queries on, you can use the example one that will be used across this blog post:

And you can populate with insert queries like the following:

Now, proceed to access your Dataclips page and click on New Dataclip, assign it a name, and select a datastore (your database). Then fill the query section on the page with the previous query: 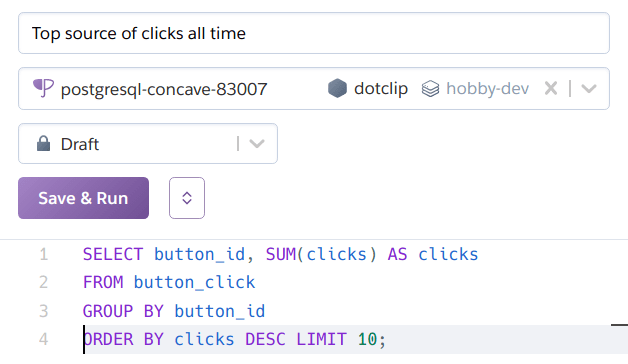 Click Save & Run and the query is now presented in a table format with data, as well as the option to view it as a chart: 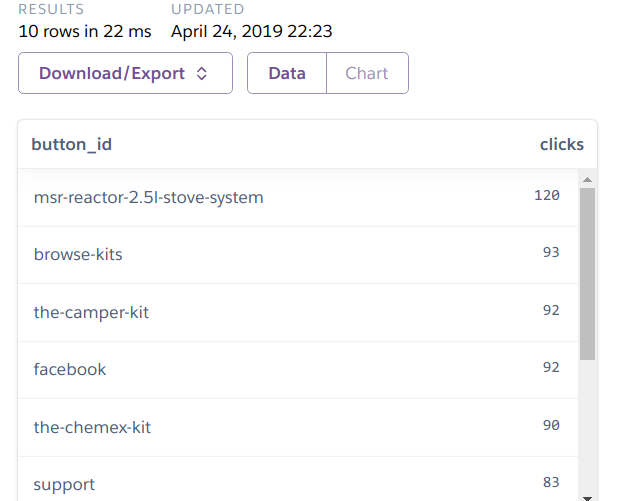 Finally, copy the url by clicking on Download/Export and selecting the text field JSON URL: 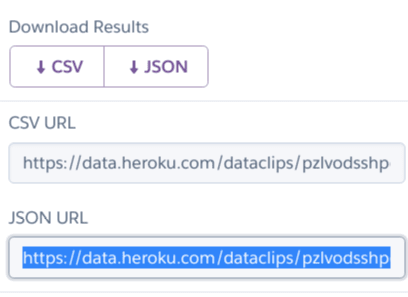 Take a note of the URL or export it to the environment variable DOT_API_URL (you’ll use it when developing the chatbot).

There are a lot of libraries out there to create a chatbot. In this tutorial, you’ll learn to use Lita, a framework that dramatically simplifies the process while offering great extensibility. The installation process requires the following software:

Install Lita 4.7.1 (the version used for this tutorial) by running:

Then, create a Lita project named “Dot,” which will serve as baseline to which you will add the Ruby code for the bot:

Run cd dot and reconfigure the Gemfile to include the required dependencies:

Finally, install the dependencies by usingbundle install. The two additional gems present in the Gemfile are:

The last step of the setup involves changing Lita’s configuration file lita_config.rb to use the Slack adapter and to access the Redis database (needed to run Lita):

Additionally, you will need to set these environment variables when launching the application:

After configuring Lita, it’s time to add functionality to respond to the chat command “Top source of clicks.” To get there, make these changes:

The file dataclip_handler.rb is a handler in Lita’s terms, which allows your bot to respond to chat commands and events and write chat messages in response. Paste the following code in the file:

Let’s go over each relevant line:

The Handler class will provide various class methods, the most interesting one being route, which allows listening to chat messages.

This line allows the handler to accept a configuration option, which is provided in lita_config.rb. You fetch an environment variable with the following code:

The next line is:

It instructs Lita to listen to chat messages addressed directly to the bot (command: true option) that contain the sentence “products have the most clicks” and to skip general unaddressed messages. A valid chat message would be:

The answer to the query is determined by the content of the do block. In this case, the next line states:

The http_response contains a string in JSON format that looks like:

So the following lines will be used to extract the results from the values key and expose them in a more usable format:

First, the response body is parsed, and the values are extracted. Then, each entry of the array is converted to a hash with the format { name: "source_name_here", clicks: 123 }. Last, only the first five results are displayed to prevent overrunning the chat room.

With the data fetched and nicely prepared, it’s possible to create the chat message that the bot will write:

This code is straightforward: it creates a chat message in the variable msg and fills it with a bullet list made up of the five leading entries and the number of clicks.

The last line is:

This commands the bot to reply with the previously built chat message.

There is another important line in the file which is outside the route block:

This instructs Lita to load the handler on boot, so that the code can be executed.

Interacting with your chatbot

If you followed this tutorial up to this point, you are ready to test your application. Inside the Dot folder, run the following command:

The application will start and greet you with a log entry stating “Connected to Slack.”

Access your Slack workspace, invite the chatbot in a room and send a chat message addressed to it with the content:

The bot will respond based on the content of your dataclip: 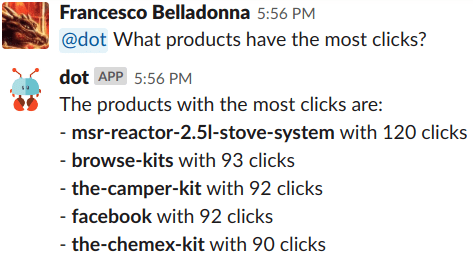 You can extend the functionality of your chatbot by adding the ability to turn Slack messages into SQL queries. This lets your team experiment before creating the dataclip and simplifies customization.

With this tutorial, you were able to create a dataclip and connect it to a Slackbot so that every marketing team member could access the query at any time. This configuration is not only extremely simple, but it also provides a much higher degree of visibility for your business analytics by injecting the process seamlessly into the users’ existing workflow.

Deploying a Dapp to Mainnet