We've all experienced spotty internet and lagging web pages. Frustrating, right? It's no doubt that such issues considerably worsen user experience. Load testing can help improve app development for customers, and app experience for users. Aaron Gibson, Software Developer at HeadSpin, discusses the benefits of load testing, describes how HeadSpin supports such functionality, and conducts a demo of our platform in action. Here's the recap, followed by a detailed webinar at the bottom of this post!

So, why should we load test? Often, developers conduct unit, integration, and smoke testing, which are all important in verifying app functionality and behavior. However, when it comes to actually deploying applications, few developers consider the repercussions of multiple users hitting the system at the same time.

When this happens, the server might be unable to serve as many requests per second because it's bogged down, or might not respond quickly due to connectivity drops, which are common in the mobile application environment.

At HeadSpin, we're concerned with how server load impacts user experience. Our platform supports running tests from many targets, giving developers the ability to test with precision, and at scale, for load-testing metrics. In short, we can spawn targets wherever we have p boxes. Additionally, we also support scheduling multiple tests to run concurrently (more on this in the webinar demo below).

To conduct a load test with HeadSpin, begin by creating a playbook (which, at HeadSpin, is a YAML file with varying parameters, allowing you to specify targets, agent count, duration, Crontab format & schedule, performance task ID, among other factors). It's simple: upload the playbook, then execute the test. Our platform can assist in the UI set-up that accompanies this process, as well. Here's what a sample playbook looks like: 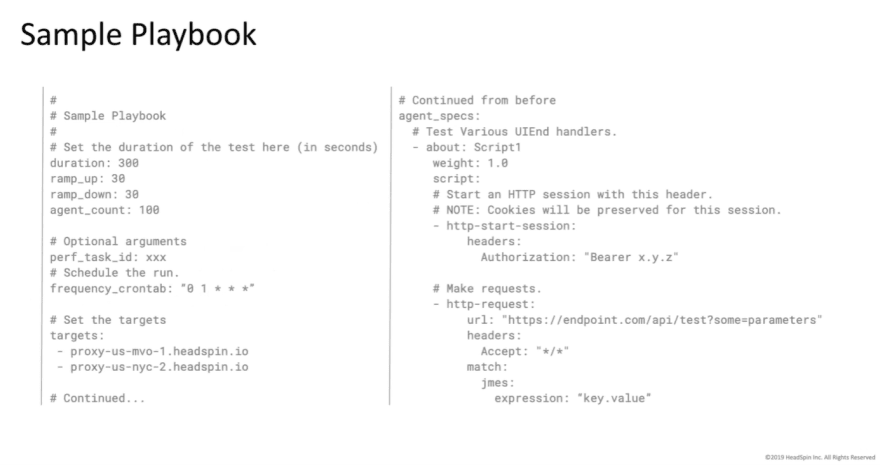 Follow this link to view the full webinar (followed by a transcript) on pre-launch load testing, replete with the benefits of load testing, as well as demos about creating playbooks and running actual tests.

VSCode, how to check workflow syntax for GitHub Actions

Load testing your applications with Artillery

HeadSpin
HeadSpin empowers app teams to assure optimal digital experiences throughout the development lifecycle with unprecedented visibility into mobile, web, audio, and video quality and performance.
Mistakes I made in my 20s as a Software Developer.
#career #javascript #codenewbie #webdev
What was your win this week?
#discuss #weeklyretro
Should You Really be Coding in Dark Mode?
#discuss #productivity #darkmode #webdev
Forem Open with the Forem app