Recently, I have started to learn Rust. Why Rust you ask? Well, it's one of the best programming languages in each of these categories: performance, reliability, and productivity which we will discuss later. Also, coming from a Python/Javascript background, I thought it would be a challenge to learn a low level, statically typed language. Let's dive right into my initial thoughts on Rust and how it compares to other languages!

Before I started learning Rust, I thought that it would be hard to get started and I was even wondering if I would be able to find good resources to learn Rust. I was wrong, big time. There are countless resources for learning Rust. I decided to take a Udemy Course and follow the offical Rust Programming Language book. The Udemy course and book were awesome! I would highly recommend looking at both when you're learning Rust. After that, I decided to play around with Rust, creating a simple command-line calculator application. To conclude, getting started with Rust is as simple as getting started with Python.

Rust is hard to learn 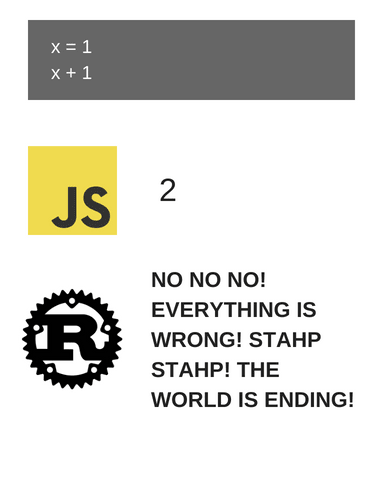 There is a reason why some programming languages (particularly targetted towards speed) are low level. To put it simply: since low-level languages are closer to machine code it's faster for them to compile to machine code and get executed then higher-level programming languages. Aside from being low-level, Rust also has some more very powerful features which make it memory safe, fast, and a productive environment. Let's have a look at these features.

As you can see, in the main function, we are defining a variable which has a type of &str. Instead of trying to figure out the type at compile-time, Rust already knows that our message is of type &str. Let's have a look at the equivalent in Python:

As you can see, we don't provide a type for our message variable hence the variable type is unknown until the program runs.

If one of these rules is not followed at any given time, the program will stop which eliminates all memory safety issues. Let's have a look at an example:

The compiler is my best friend

The Rust compiler output is beautiful. It doesn't only tell you what the problem is, it tells you how to fix it. No more sleepless nights waiting for a response on StackOverflow, just implement what the compiler tells you what to do and no more bugs.

Should you learn Rust?

Rust is definitely something worth looking at. Even if you don't plan to use Rust for your future projects, for any developer coming from a higher-level programming language background to have a look at Rust. With that said, now I will be focusing on backend web development with Rust. Who knows, it might replace my Node.js backend (I'll keep you posted).

In conclusion, my experience thus far with Rust has been awesome. I would highly recommend playing around with Rust. Thanks for reading.

How to spot poor implementations of 2FA

Describe the worst job interview you've ever taken part in

How to Become an Open Source Developer ?

Can You Give Me Some Recommended Courses or Articles about NextJS that is Free ?.