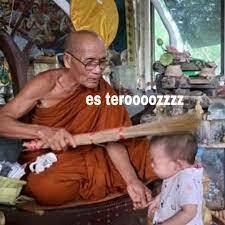 My main inspiration in creating this project was the project that was used as an example for this Hackaton. That is, microservices-demo which is licensed under the Apache 2.0 license.

For the name of this project, I was inspired by the meme above. Hahahaha...

This meme basically describes how most Indonesian mothers respond when their child coughs. Most of them will immediately respond by saying "es terosss" which means "ice agaiiin". So, ice (or ice cream) is always considered the cause of our coughs.

Okay, time to get serious.

All data is stored in Redis using RedisJSON which can be retrieved with RediSearch, except photos stored in Minio.

This app was created to demonstrate the use of Redis and Minio in modern microservices based web development.

Esteros is composed of 4 microservices written in TypeScript (Node.js) that talk to each other over Redis Pub/Sub.

Many thanks to all the open source projects that have helped me in making this application.

Some of them are below.

Apart from the above, there are many others. However, it would be too long to explain one by one. Mainly which are dependencies of my project.

Thank you so much everyone for creating a project that has helped the work of many people.

Creating data specifically for each user in React / Node.js

Once suspended, hapakaien will not be able to comment or publish posts until their suspension is removed.

Once unsuspended, hapakaien will be able to comment and publish posts again.

Once unpublished, all posts by hapakaien will become hidden and only accessible to themselves.

If hapakaien is not suspended, they can still re-publish their posts from their dashboard.

Once unpublished, this post will become invisible to the public and only accessible to A. Husen.

Thanks for keeping DEV Community 👩‍💻👨‍💻 safe. Here is what you can do to flag hapakaien:

Unflagging hapakaien will restore default visibility to their posts.