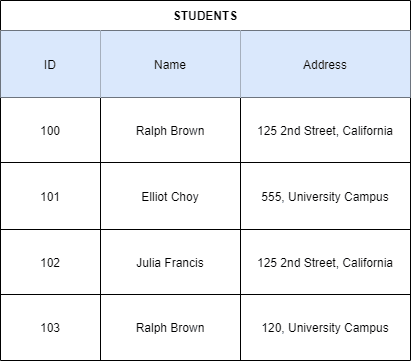 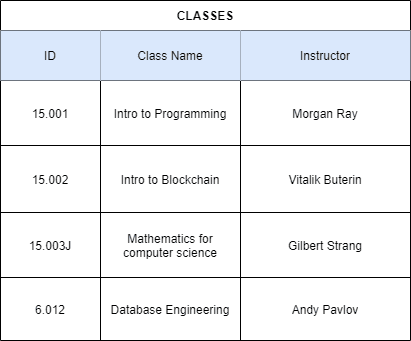 This can become complex when the number of rows of data increases so it is really difficult to scale. The new table that has been formed can be really useful as it provides us with the data about the attendees of a particular class as well as the data regarding the classes a student is taking. You can add another column to the new table formed by the merging of the primary keys of the two tables. For example, we can add a grade column to the newly formed table, and now we are having a lot of useful data in the newly formed table.


These types of relationships are formed to avoid redundant data in a database and also to avoid some other problems. As described earlier, by using foreign keys for a particular table, we can usually find more information about the particular foreign key. Foreign key relationships are possible due to the relational data modeling paradigms. What if we did not have a relation between the Grades and the Classes table and we had information about the Classes combined in the Grades table.


So, with relationship, we do not need to write all the data about a particular class in the grades table, but without a relationship, we have to write about the classes in the grades table, so a particular class id would have the same instructor and the same name which would result in redundant data. Redundant data is different as compared to duplicate data, duplicate data will have different primary keys whereas redundant data would have the same foreign key. Storing redundant data is a huge loss of space, and in this scenario, there would be hundreds of students taking the same class, thus we would have to write the instructor and the class name hundreds of times, wasting a lot of storage.

The other problem with redundant data storage is that it causes a lot of problems with updating and retrieving data from the database. So we continue the previous example, suppose the instructor for a particular class changed, you will have to change the instructor name hundreds of times in the Grades table because the name of the previous instructor has been written there multiple times. After all, there is redundant data. There are databases with millions of rows of data and updating the data in millions of rows is fatal for the speed as the CPU would be millions of times slower in completing the task as compared to updating a single row of data where the relationship between tables exists. If you do not update each row of data in a table that has redundant data, it may cause a lot of problems with retrieving data from the database.


Suppose the instructor changed and you did not update every row with the new instructor name, so when somebody wants to send an email to the instructor of a particular course, he would perform a query to the database for the specific class instructor, what if the query returns the first result which is the old data which was not updated and contained the name of the old instructor rather than the new instructor, thus causing a discrepancy in the application of the database. To avoid all this, we use relationships between different tables. There are some limitations for lots of reading and write queries per second, this is due to the relations between data and because SQL enforces ACID requirements.