Pointer is one of the most confusing concept in c and c++, In this blog post we are going to make it easy to understand this concept.

Where the address is just put in numbers to make it easy to understand, normally it is put in hexadecimal, variable is the name and the value is the assigned ascii number attached to the variable.

Depending on the type of a variable the computer will reserve a vary amount of space in memory.

You can check the size of a variable type using sizeof operator.

When we declare a variable l of type char.

Int this example we created the address of l is 6.

We assigned the value 'A' to the variable l but the byte will not hold a letter 'A', it will hold ascii code, which is 65 (man ascii).

In the int and float case we use 4 bytes.

when we want to find the address of a variable we use the & operator. 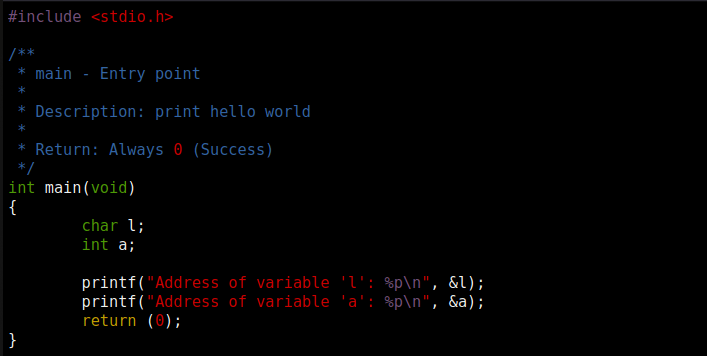 The modifier %p is used to print address

Up to now we learned how to store a character, decimal and floats in a variable.

We also learned how to get the address of variable using & operator.

To declare a pointer variable 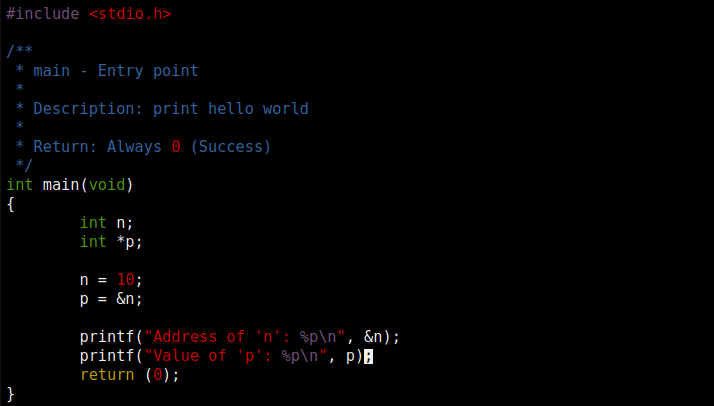 Dereferencing is a way of using pointers manipulate values stored at the memory address they point to.

We use the * dereference operator to Dereference the value.

First off * has two functions

After dereferencing *p = 20 the memory will look like this 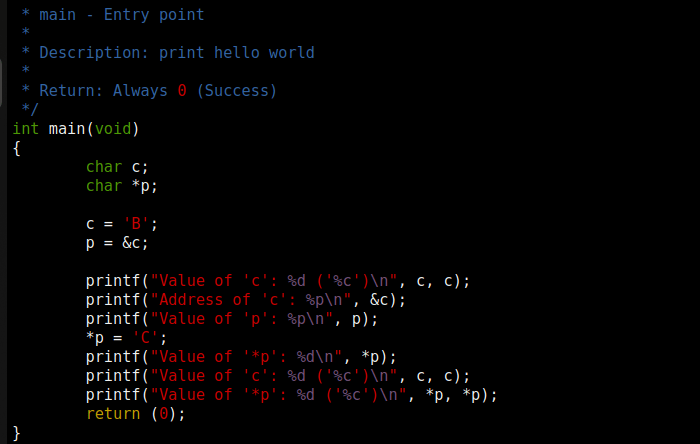 #Functions parameters are passed by value

We have covered in the c function blog post that there are two way of passing parameter in functions. 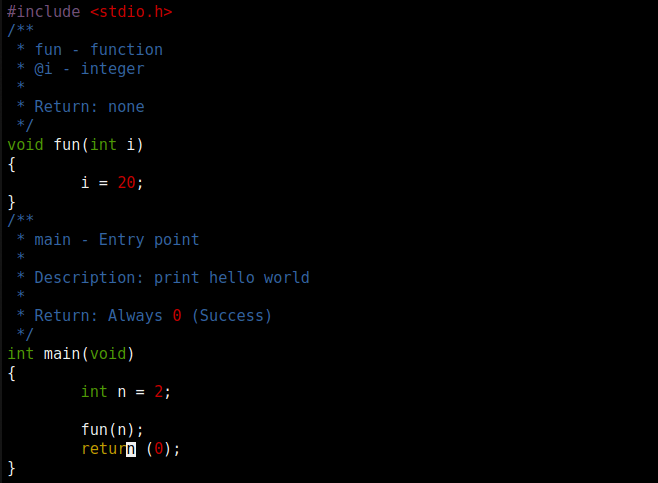 Before the execution of i = 20; the memory layout looks like this

After the execution of the i = 20; the memory layout will look like this

To modify a variable from outside the function it is declared, using a pointer. 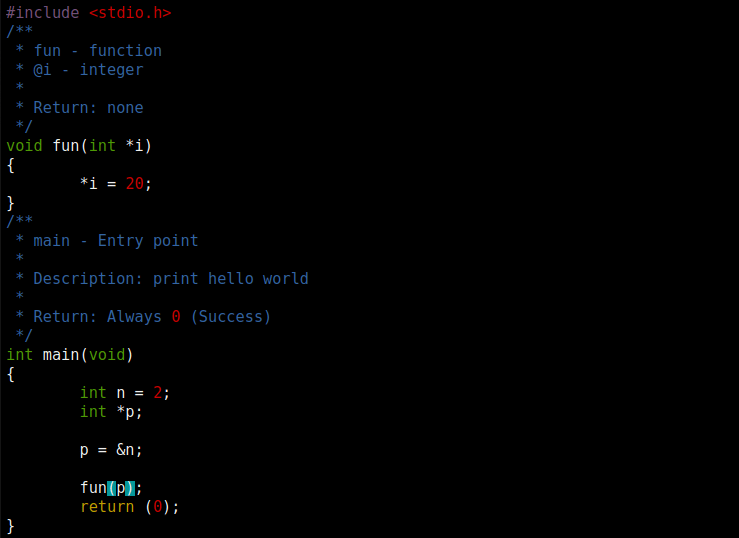 Before the function fun the memory layout looks like this

when we call the function fun the value of p is stored in a new variable called i.

Since i stores the same memory address, it points to the same address, and so both p and i now point to n. Therefore, when we execute the line *i = 20; we modify the value of n and n now holds 20.

When we leave the function fun, the variable i is destroyed, but i’s value is still 20

Arrays in C are contiguous memory areas that hold a number of values of the same type and all elements of an array have the same type.

To declare an array

arr[0] will access the first element, arr[1] the second element, and so on.

In this example the computer will reserve a continuous space for 5 integers in memory. 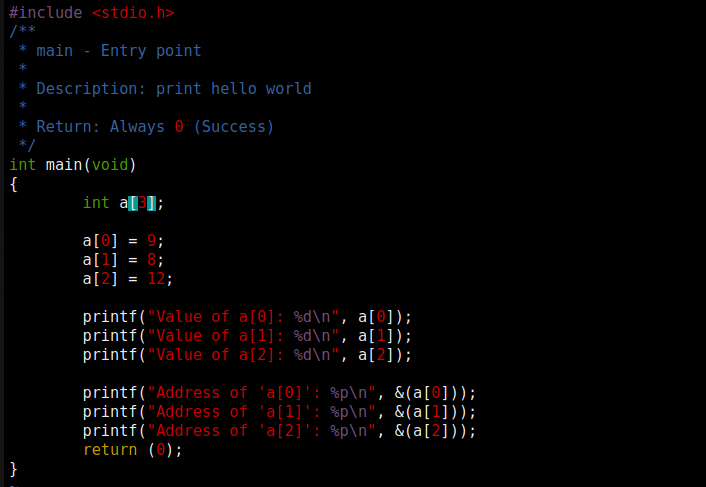 Arrays are not pointers they don't hold memory address, But the name of an array is the address of the first element of the array. 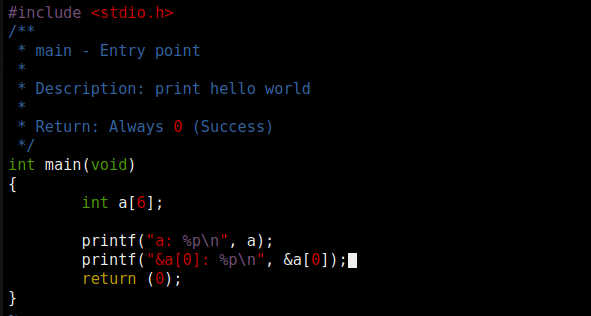 So why this it outputting the address, when an array a is used in an expression the array type gets automatically implicitly converted to pointer-to-element type(array type decay).

There are two exceptions to this rule in two cases: 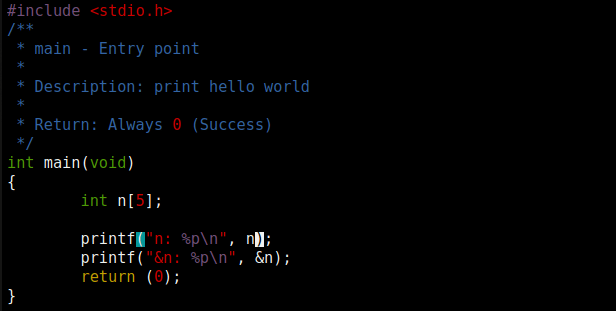 We can access the elements of an array using a different method as *(var + x), where var is the name of an array, and x is the (x+1)th element. 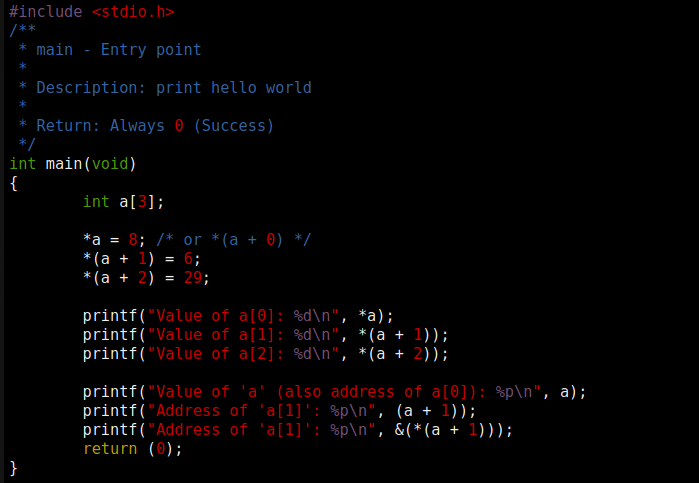 The memory is a layout

Strings are actually one-dimensional array of characters terminated by a null character '\0'. 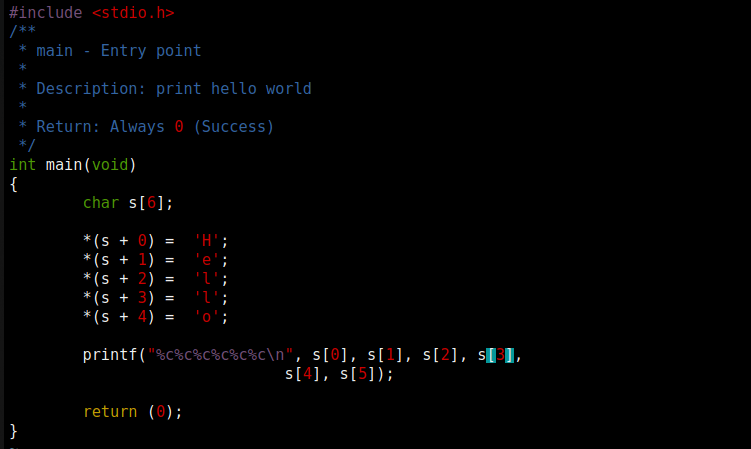 You probably notice that we used an array with a size of 6,this is because in C, strings end with the char '\0' (ascii value = 0).

Each segment has own read, write and executable permission. If a program tries to access the memory in a way that is not allowed then segmentation fault, which is a common problem that causes programs to crash. 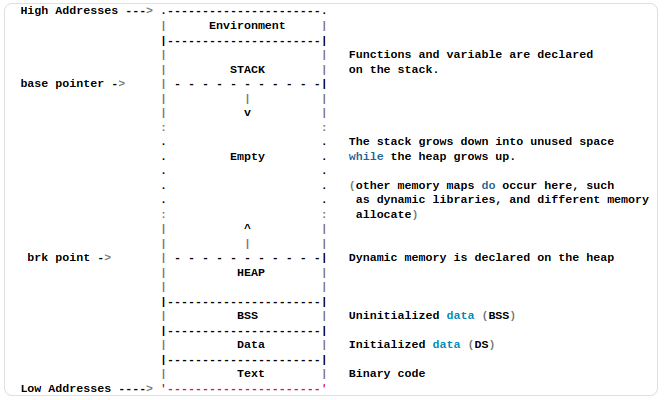 To understand how LIFO work check out the stack data structure.

Heap is used to allocate the memory at run time and heap area managed by the memory management functions like malloc, calloc, free, etc

It contains all uninitialized global and static variables.

The text segment contains a binary of the compiled program and he text segment is a read-only segment that prevents a program from being accidentally modified.

Tip: NULL is for pointers which is the absence of address and '\0' is the is for strings

Is modern C better then Rust?