C is a imperative (procedural) language that was created by Dennis Ritchie used to develop software like operating systems, databases, compilers, and so on.

What do we mean when we say imperative (procedural)? We first need to understand different paradigm of programming language and paradigm just means the style in which they are written of structured.

There are different types programming language paradigm, some of them are:

Of these paradigm we just need to know the two of them for c language.

Before we start learning c language we first need to understand the compilation process and the commands used on each process.

The tool we are going to be using in this blog to compile c is gcc tool.

The process of compilation this like this in order: 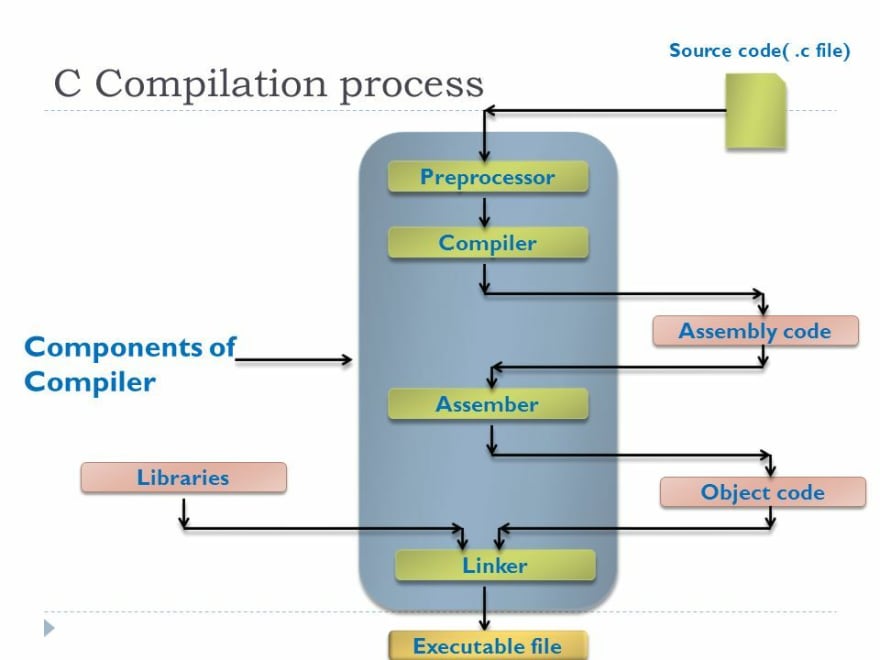 Now let's see each one of them individually.

Preprocessor: takes the source file to generate the intermediate file by:

we can also use the -o function to output into a file.

Compiler: takes the source code to convert it into an assembly code and the command we are going to use is:

Assembler: convert the assembly code into binary code 0's and 1's or machine code and the command we are going to use is:

Linker: linker's includes some of the library files into the program to create an executable file and the command we are going to use is:

Now that we learned about the compilation process, we need to understand the gcc compiler.

-o : is an option to specify the output of the file.

-Werror: is an option to show the warning if any error is there in the program.

-Wall: is an option to show all kind of warning like unused variables errors.

-std=: is an option to set the standard(version) of c to compile source file.

Tip : For more information on gcc compiler use the command man gcc to read the manual.

Now we finished learning about compilation process and gcc compiler, we need to get our hand dirty and start codding in c.

The first thing we need to do is learn the most common style of writing c language and how to document them,For this course we need to use the Linux kernel coding style Linux style.

The structure of a hello world code

#include <stdio.h> is the header file that define the input output routines used by a program.

used to document you code and some of c language commenting syntax are:

Used to connect a value to a symbol

some of the modifiers used in c are long, long long,short,unsigned and signed.

They are used to specify how much space the variable take on memory.

This function is used to find out how a much size types use.

Is a way of converting one type of data into another.

we essentially converted the char into int and the int into float.

Used for printing or writing a statement on to the stdout.

special symbols like %s,%d and %f are used to represent different data's that are imputed to the right of the main string.

Does not include null character inputs to write or print to stdout.

Used to write a character, of unsigned char type, to stdout.

putchar can sometimes be used to print digit's,To do this we need using ASCII value of '0'.

How To Iterate Over C String