It's no secret that one of the most important aspects of a typical backend application is to serve as a nice layer between a user-facing application and the database.

This means that mastering your database and optimizing its performance can make the difference between a backend app that can handle hundreds of thousands of users simultaneously, and an application that breaks with the first few hundred real users.

One popular and easy-to-implement technique that can have significant performance gains is reducing the number of roundtrips between a backend application and a database or any external service by grouping operations together.

So for example if you want to fetch 100 orders from the database, you could:

In mongoose v5.13.0 we added a feature that leverages this technique by sending multiple writes in bulk instead of sending each operation individually: Model.bulkSave(...) which utilizes the native MongoDB bulkWrite(...) under the hood.
The good news is that the API is intentionally designed to require minimal changes to your existing code to gain those performance benefits.

If you have a scenario where you have 100 users, and for each user, you'd like to find their cart, and if they don't have a cart in the database, you'd like to create a new one, you could do that by one of two ways

Variant A) The following code snippet sends one updateOne/insertOne command to the database for each cart:

Variant B) Here's how the code snippet above can be converted to use bulkSave(...), resulting in a single database command, regardless of how many documents we're trying to save:

The first example sends N operations to the database, creating a heavy load on the wire, while the second one sends a single operation.

Model.bulkSave(...) can be ~3x faster than regular Document#save(...), to test this yourself, run the code from this gist. 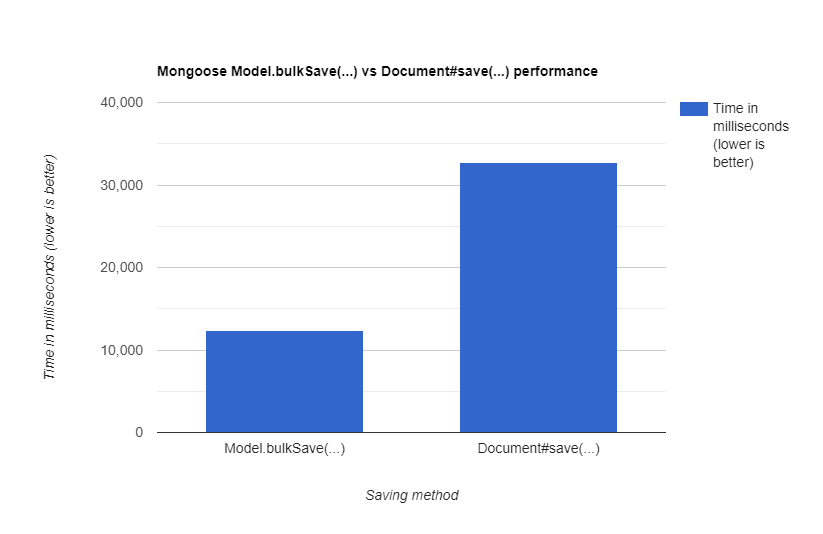 So, should you always use bulkSave over save?
MongoDB has a limit to the size of data you can send with bulkWrite which is 100,000 operations per batch. I would chunk my documents to be sent 10k at a time just to be safe, and still get the significant performance benefits of bulkSave.

If you're usually dealing with less than 10k documents, you should be safe always using bulkSave, otherwise chunk your documents to be processed 10k at a time.

How do you feel about bulkSave?
Would you use it in your application?
What other performance techniques that you have found useful over the time?

Starting an app with react native! (just to save)