Appwrite is a self-hosted open-source end-to-end backend server, that provides developers with easy-to-use and integrated REST APIs to manage their core backend needs. Appwrite integrate seamlessly with existing tools and technologies as it is cross-platform and language agnostic.

The Appwrite server is packaged as a set of Docker containers. The Docker approach allows you to install and run Appwrite easily on any operating system (OS) that can run a Docker CLI.

This tutorial will explain why Appwrite is packaged in Docker containers. More importantly, walk you through a 3 step process of creating a local Appwrite instance on your host machine (computer).

To run Appwrite with Docker, you must have a machine with:

Appwrite packaging its software in Docker containers saves you time and effort to install libraries, databases, and tools that make Appwrite work, thereby reducing the installation to a single docker run command.

To learn more about how Docker works, check out the Docker documentation.

Next, you will learn how to create a local Appwrite instance in 3 steps.

Step 1: Getting the Docker CLI

The Docker CLI is a command-line tool that lets you talk to the Docker daemon. Though it is possible to install only the Docker CLI on your machine, through the ways suggested in this GitHub issue, you should use Docker Desktop.

For macOS
To install Docker Desktop on macOS, follow this installation guide on the Docker documentation.

For windows
To install Docker Desktop on Windows OS, follow this installation guide on the Docker documentation.

For Linux
See this documentation to learn how to install Docker on several Linux distributions.

Once you’ve successfully installed Docker on your machine, use the OS-independent way to check if Docker is running using the docker info terminal command.

You should get an output similar to the image below: 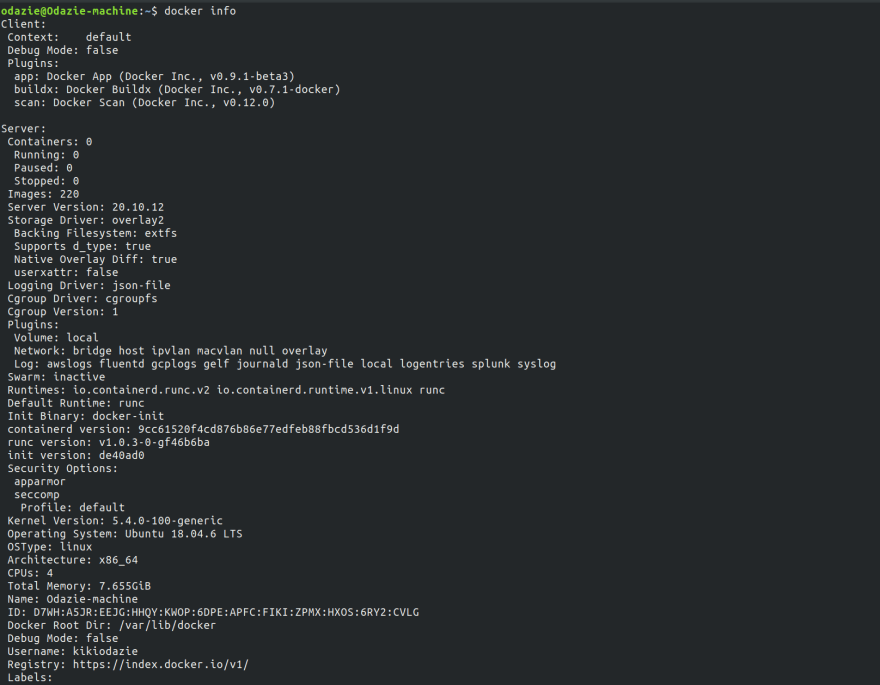 Next step, you will create a local Appwrite instance by running the Appwrite Docker installer tool from your terminal.

You use the Appwrite installation docker run command to run the installer. The command is the same for macOS and Linux OS because they are Unix related and different from the Windows OS.

Unix command (Mac and Linux)
If you are using a macOS or a Linux OS, open up your terminal and run this command:

Windows commands
If you are using a Windows OS, the CMD and PowerShell commands are:

After running your OS suitable Appwrite Docker installer command, it pulls the Appwrite image from Docker Hub. Then it starts the Appwrite installation process, opening up an interactive console to take inputs for the docker-compose.yml file.

Your terminal output will be similar to the image below: 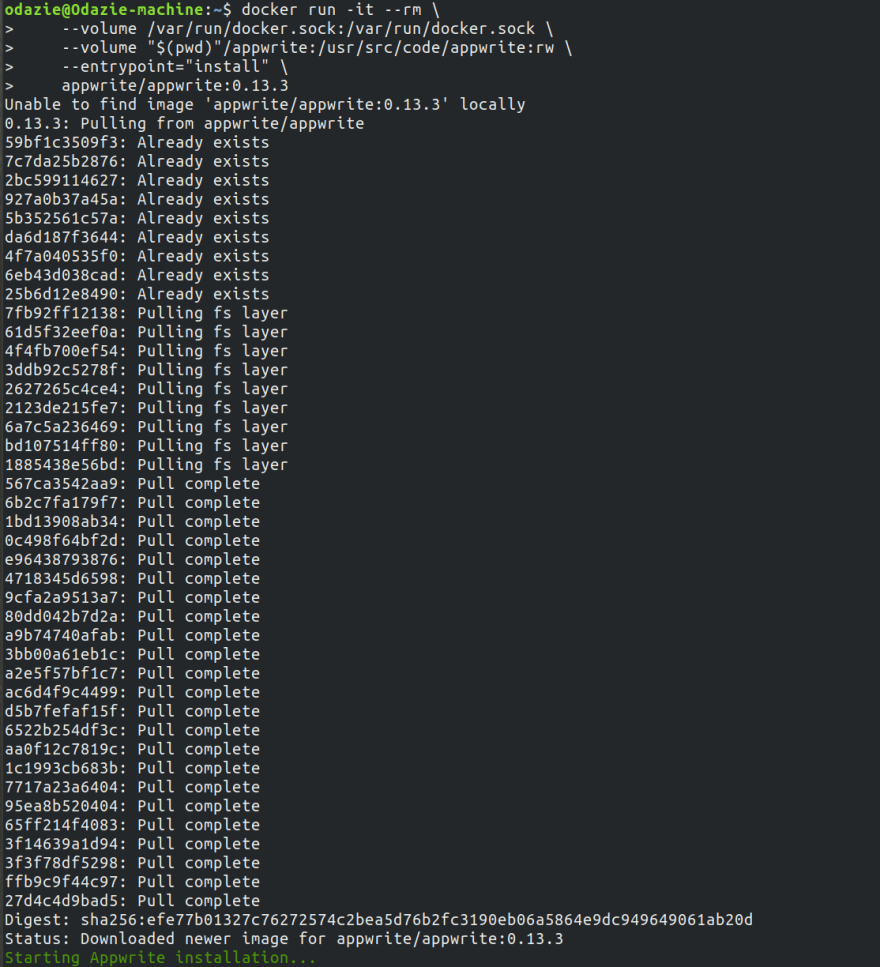 The commands explained in detail
The difference in all three commands is their syntax. \, ^ and , of Unix, Command prompt, and Powershell, respectively, add new lines in typing a multiline command.

For the Docker run references in the command:

Next, you will complete the Appwrite installation process.

Once the installation process begins, you will get prompts to input your initial Appwrite configurations.

3rd prompt
Choose a secret API key (default: 'your-secret-key'). Whatever API key you choose, make sure to make a backup of your key in a secure location.

4th prompt
Enter your Appwrite hostname (default: 'localhost'). In this case, if you have a domain or subdomain, e.g., appwritetest.com, input it. If not, press "enter" to use the default.

5th prompt
Enter a DNS A record hostname to serve as a CNAME for your custom domains. You can use the same input as your Appwrite hostname with default as localhost.

The annotated section on the image above shows that the created docker-compose.yml file is running and setting up the Docker containers that makeup Appwrite.

After some time, depending on your internet speed, you will get an output “Appwrite installed successfully.”

Now that you've installed Appwrite, open your browser and visit the hostname you entered. If default, visit http://localhost, and you should see Appwrite's sign-up page. 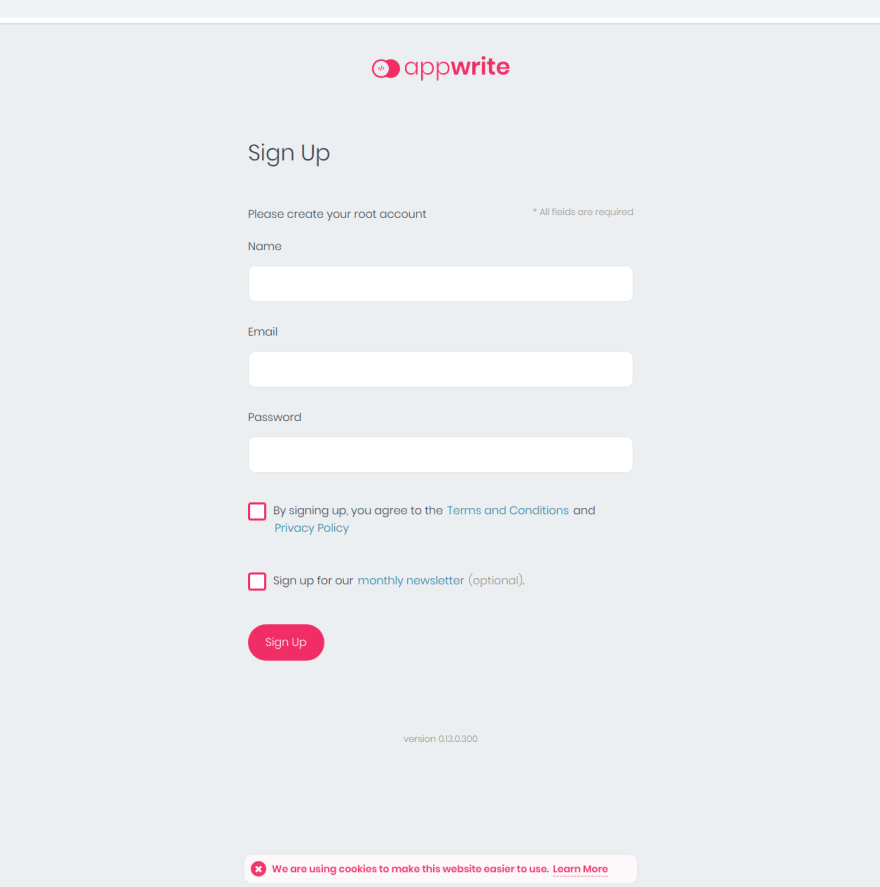 In this tutorial, you learned why Appwrite is packaged in Docker containers, the Docker CLI, and, more importantly, how to create an Appwrite local instance.

To learn more about Appwrite, check out the following resources:

Do you want to create product-focused no-bullshit technical content for your software product?

Talk to us
How to quickly authenticate a dashboard in Vue.js using Appwrite and Auth0
#vue #appwrite #auth0 #javascript
Build a real-time text-typing indicator in Next.js
#nextjs #javascript #react #tutorial
How to optimize image upload in Appwrite and Vuejs
#javascript #vue #tutorial #programming

Once suspended, hackmamba will not be able to comment or publish posts until their suspension is removed.

Once unsuspended, hackmamba will be able to comment and publish posts again.

Once unpublished, all posts by hackmamba will become hidden and only accessible to themselves.

If hackmamba is not suspended, they can still re-publish their posts from their dashboard.