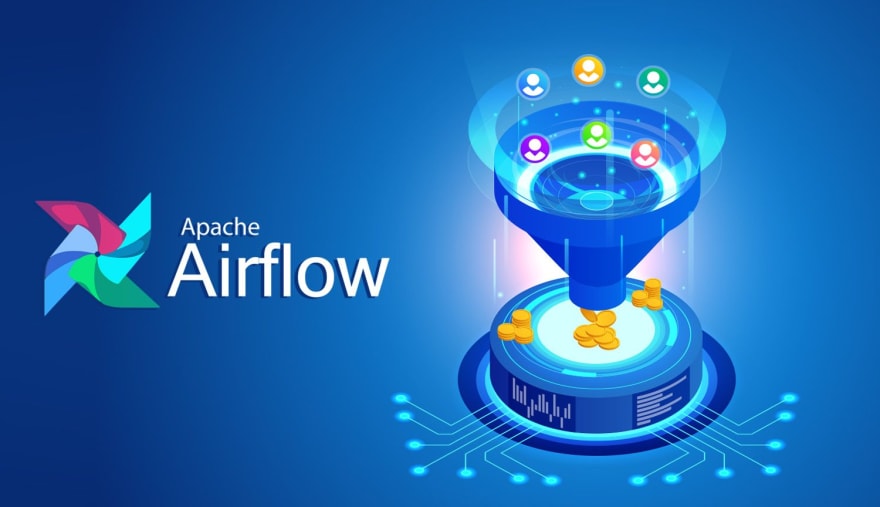 It seems like almost every data-heavy Python shop is using Airflow in some way these days. It shouldn't take much time in Airflow's interface to figure out why: Airflow is the missing piece data engineers need to standardize the creation of ETL pipelines. The best part of Airflow, of course, is that it's one of the rare projects donated to the Apache foundation which is written in Python. Hooray!

If you happen to be a data engineer who isn't using Airflow (or equivalent) yet, you're in for a treat. It won't take much time using Airflow before you wonder how you managed to get along without it.

What's the Point of Airflow?

Airflow provides countless benefits to those in the pipeline business. It's not too crazy to group these benefits into two main categories: code quality and visibility.

Airflow provides us with a better way to build data pipelines by serving as a sort of 'framework' for creating pipelines. In the same way a web framework might help developers by abstracting common patterns, Airflow does the same by providing data engineers with tools to trivialize certain repetitive aspects of pipeline creation. Airflow comes with numerous powerful integrations that serve almost any need when it comes to outputting data. By leveraging these tools, engineers begin to see their pipelines abiding by a well-understood format, making code readable to others.

The more obvious benefits of Airflow are centered around its powerful GUI. Wrangling multiple pipelines which are prone to failure might be the least glorious aspect of any data engineer's job. By creating our pipelines within Airflow, we gain immediate visibility across all our pipelines to quickly spot areas of failure. Even more impressive is that the code we write is visually represented in Airflow's GUI. Not only can we check the heartbeat of our pipelines, but we can also view graphical representations of the very code we write.

To get started with Airflow, we should stop throwing the word "pipeline" around. Instead, get used to saying DAG.

What is a DAG?

If this remains unclear, consider how nodes in a tree data structure relate to one another. Every node has a "parent" node, which of course means that a child node cannot be its parents' parent. That's it - there's no need for fancy language here.

Edges in a DAG can have numerous "child" edges. Interestingly, a "child" edge can also have multiple parents (this is where our tree analogy fails us). Here's an example:

In the above example, the DAG begins with edges 1, 2 and 3 kicking things off. At various points in the pipeline, information is consolidated or broken out. Eventually, the DAG ends with edge 8.

Installing Apache's data services is typically an awful experience. In most cases, things start out by installing some highly specific version of Java after getting harassed to create an Oracle account (please kill me). Once that's done, you usually need to install and configure three or four different Apache services with obnoxious animal-themed names.

Setting up Airflow is refreshingly easy. To get started with a barebones Airflow setup, all we need is to install the apache-airflow Python library:

Installing Airflow on its own is fine for testing the waters, but in order to build something somewhat meaningful, we'll need to install one of Airflow's many "extra features". Each Airflow "feature" we install enables a built-in integration between Airflow and a service, most commonly a database. Airflow installs an SQLLite feature by default.

Airflow needs a database to create tables necessary for running Airflow. Chances are we don't be using a local SQLLite database when we use Airflow in production, so I've opted to use a Postgres database:

Airflow has features for much more than just databases. Some features which can be installed with airflow include Redis, Slack, HDFS, RabbitMQ, and a whole lot more. To see everything available, check out the list: https://airflow.apache.org/installation.html

Before we do anything, we need to set an important environment variable called AIRFLOW_HOME. When we initiate Airflow, it's going to look for a folder which matches the name set as the value of this variable. Then, it's going to unpack a bunch of core files needed to run Airflow into said folder:

Next we need to unpack the Airflow configuration files into /airflow. This is as simple as running the following command:

A bunch of new files should magically appear in your / airflow directory, like this:

Running initdb for the firs time defaults to creating an Airflow instance pointing to a local SQLLite database. Once we run it the first time, we can now change the variables found in our new ./airflow/airflow.cfg file to point to a Postgres database (or database of your choosing).

To hook Airflow up to a live database, we need to modify a couple of settings in airflow.cfg. Look for the sql_alchemy_conn variable and paste an SQLAlchemy connection string for your database of choice. If you're using Postgres, don't forget to set sql_alchemy_schema as well:

With those changes made, initialize your database again:

This time around, Airflow should initialize your provided database with a bunch of tables necessary for running the application. I decided to take a peek in my database to see for myself:

With everything configured, run the following to kick up Airflow at port 8080:

Sweet! Airflow is kind enough to create a bunch of example DAGs for us to poke around in. These examples are a pretty good starting point for becoming acquainted.

Before we get too crazy, let's break down the elements of the screen above:

Feel free to click around and break some things while you have the chance.

Anatomy of an Airflow DAG

Any pipeline is essentially just a chain of tasks, and DAGs are no different. Within DAGs, our "tasks" are defined by operators.

Let's take a step back: DAGs are our workflows, and tasks within a DAG are the actions taken by said workflow. An "operator" refers to the type of action a task belongs to, such as a database action or a script action. It isn't crazy to imagine we might have multiple database-related actions in a single DAG: in this case, we'd use the same operator to define multiple tasks (PostgresOperator, assuming we're dealing with Postgres).

Here are some different types of operators:

Operators can occur at any point in a DAG. We can fire multiple operators throughout the lifetime of a single DAG at any point.

Let's explore some of the example DAGs Airflow has provided us. A good place to start is example_python_operator :

Here I'm checking out the Graph View tab of a DAG: this view is the best representation of what's happening from start to finish.

This seems to be a simple DAG: it's just spinning up 5 Python operators which trigger a sleep timer, and nothing else. Run this DAG by clicking the Trigger DAG item in our menu bar, and check the output in whichever console you used to launch Airflow:

This doesn't really tell us anything, but then again... isn't that what we'd expect? After all, there aren't any steps which occur after the "sleep" Python operators, so nothingness might be a success here.

To get a better idea, check out the code tab. That's right: we can investigate the source code for any DAG right from our GUI!

After setting our DAG's configuration, the DAG is instantiated with dag = DAG(). We pass a few things into DAG() upon creation (like the args we set earlier). This is where we set the DAG's name and schedule time.

In our DAG's graph view, we saw tasks named print_the_context, and a bunch of tasks following a convention like sleep_for_#. In the source code, we can see exactly where these task names are being defined! Check out the first task:

The first task is being set inside PythonOperator() with an id equal to print_the_context. It's a function that prints some information and returns a string!

Here's the second group of tasks:

This is super cool: this time, the Python operator is in a for loop. This is an excellent demonstration of how we can create DAGs dynamically!

Think you have what it takes to create your own DAG? I think you do too. Let's set the stage.

Getting Ready to Create Our Own DAG

There are a couple of housekeeping items we should knock out before moving forward. This won't take long.

As we've already seen, DAGs need to have an "owner". The default DAGs we've seen so far set their user as airflow. We can't do this with the new DAGs we create -we need to set a legitimate user. In your Airflow UI, navigate to Admin > Users.

Then, create a user that will "own" our new DAG.

To simulate a real-world scenario, we should have our DAG insert information into a database. Destinations for DAG output need to be created and managed in the Airflow UI, under Admin > Connections.

I've started setting up a Postgres connection below:

Shut down your web server and create a folder within /airflow called /dags. This will be where we store the source code for DAGs we create moving forward (the location of your DAGs can be changed in airflow.cfg, but /dags is the default). Create a Python file in /dags named something along the lines of my_first_dag.py (the name of the file doesn't matter tbh).

I'm going to create a DAG made up of three tasks. These tasks will use the Bash , Python , and Postgres operators:

I've purposely set a bunch more arguments in default_args to demonstrate what this would look like. Note the value of the owner argument.

Check out the tasks we created:

The last part of our script is muy importante: this is where we set our pipeline structure. set_upstream() is one way we set the order of operations to occur: by calling set_upstream() on each task, it is inferred that t1 will be the first task. Forgetting to set your pipeline structure will result in tasks that don't run! There are a couple of other ways to set this:

We should be able to see the structure of this DAG in the UI's graph view now:

If you're like me, your DAG won't run the first time. This can be very frustrating. Luckily, there's an easy way to test tasks in our new DAG via the Airflow CLI. Simply enter the below:

This is what I entered to test the Postgres task:

After some adjustments, I was able to receive a success:

Surely enough, the record was created in my database!

Introduction to Python for Data Engineering