So you know about Unicode codepoint and encoding (UTF-8, UTF-16), but are you aware that few standard conversions have surprising outcomes? In this short post, I'll list some of the most surprising behaviors.

Case mapping is the behavior behind the uppercase and lowercase functions in your favorite language. Unexpected behaviors can sometimes lead to bugs, some of them affecting software security.

While the strings “go\u017Fecure” and “gosecure” are not equal, a code that applies the uppercase transformation to both strings could mistakenly interpret both strings as being equal.

Here is a demonstration in Python.

The same behavior applies to Java

This behavior occurs because the characters ı (U+0131) and ſ (U+017F) are converted to an ASCII characters as part of Unicode specification. Aside from a few exceptions, you can assume that your language apply these transformation by default.

The purpose of normalization is to simplify expressions to allow matching equal or equivalent “meaning”.

API can sometimes hide those transformations. For example in C#, the class Uri normalize the hostname from URI entered.

Here is a list of APIs with such behavior (see Section Auditing Source Code).

If you have an application that susceptible to issues related to Unicode, you can use this simple cheat sheet.
This cheat sheet can be used by developers to build regression test cases to make sure no characters are being misinterpreted. 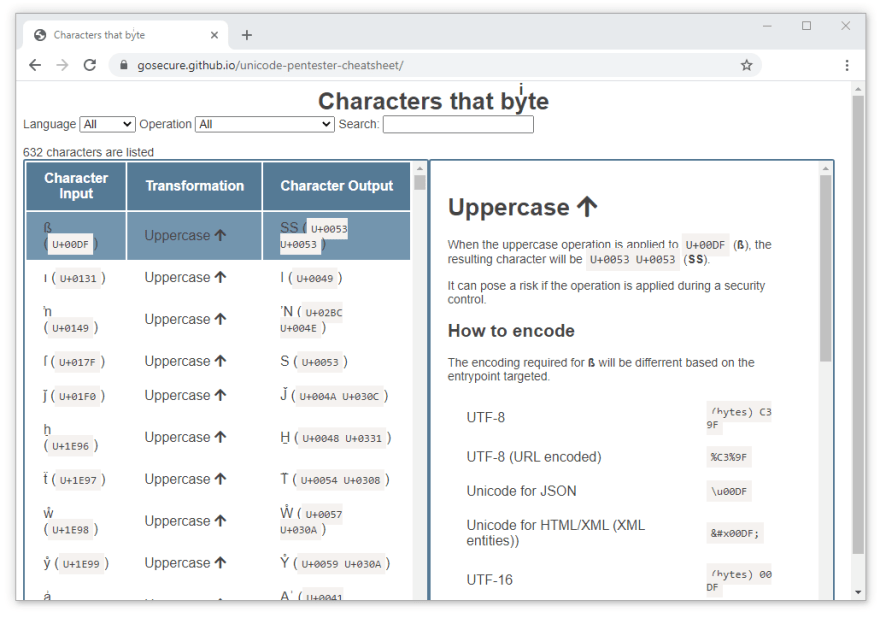 If you are curious, you can read the full article with a security focus.

🚀 Github Actions: A simple way to trigger workflow from another workflow

How to sign your commits with GPG or SSH keys

Once suspended, h3xstream will not be able to comment or publish posts until their suspension is removed.

Once unsuspended, h3xstream will be able to comment and publish posts again.

Once unpublished, all posts by h3xstream will become hidden and only accessible to themselves.

If h3xstream is not suspended, they can still re-publish their posts from their dashboard.

Once unpublished, this post will become invisible to the public and only accessible to Philippe Arteau.

Thanks for keeping DEV Community 👩‍💻👨‍💻 safe. Here is what you can do to flag h3xstream:

Unflagging h3xstream will restore default visibility to their posts.