There are already hundreds of great hooks around. But what if we want one more? Well, reading official docs is the great place to start (and reference in the future).

What I want is to:

The theme I chose for illustration is assignment expressions (PEP572). And down the line I will create three different hooks for that.

For experiments with hooks already existing in the wild you would need only one git repository. And then you would configure it to install/use hooks from somewhere else.

But to write your own, there should be two separate repositories.

Here is how it should look now

The first hook will be very basic, leveraging existing possibilities of the framework. I will call it "walrus-grep".

pygrep is a cross-platform version of grep.

entry takes regexp of something that you don't want to commit. In my case I used ":="-pattern without actual regexp magic or escaping symbols.

The most convenient way to experiment is with try-repo command. It allows to test hooks without commiting .pre-commit-hooks.yaml every time, and without pinning to revision later on in .pre-commit-config.yaml.

We can either stage files each time before running checks or use try-repo command with --all-files flag.

This happened because hooks repo doesn't have a single commit - there is nothing HEAD could point to. Commit .pre-commit-hooks.yaml and repeat.

See "(no files to check)"? Often this would be true, checks could have pre-defined limits e.g. file extension, path, ignore options. But we have our experiments.txt file and do not expect any of those!

Gotcha: --all-files flag is more like "all tracked, not only staged files". So either way you should add files to git before running checks.

At last! "Failed" is what we needed to prove that grep hook catches ":=" inside some random staged file. So here failure is a good thing.

But to think about it situation is far from ideal:

For "python code only" part there is types: [python] option which I will add to .pre-commit-hooks.yaml

We see "(no files to check)Skipped" again, but now it is expected.

and we have our beloved failure back.

As for the second concern, ":=" inside comments or docstrings, we would require something different.

The second hook will be analyzing syntax tree to find exact node type. I will call it "walrus-ast".

Disclaimer: This one will work only in Python 3.8 environment (beta1 is currently available for testing).

The hook itself will be at hooks/walrus_ast.py

What we can or can't do here? The rules per documentation are simple 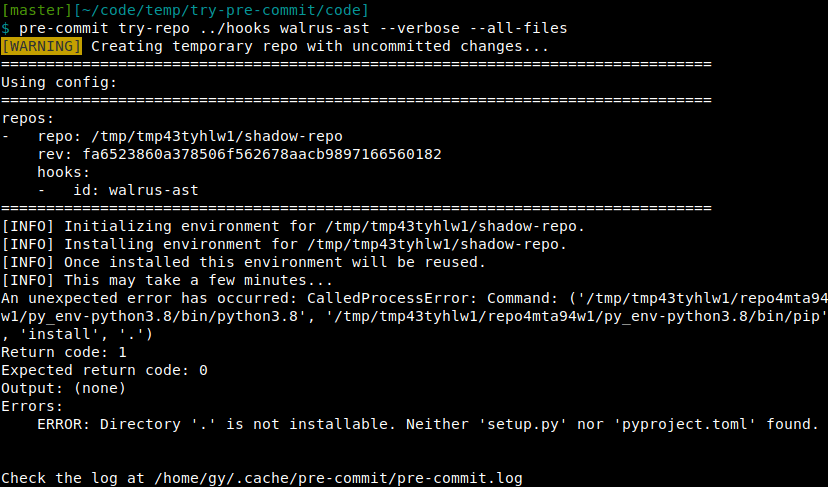 "Directory '.' is not installable". What happened?

It turns out that (in case of python scripts) we should describe how to install it as usual, with setup.py or pyproject.toml.

Note: instead of py_modules you can use something like packages=find_packages(".") or anything else you are used to do in setup.py

Track both new files in git 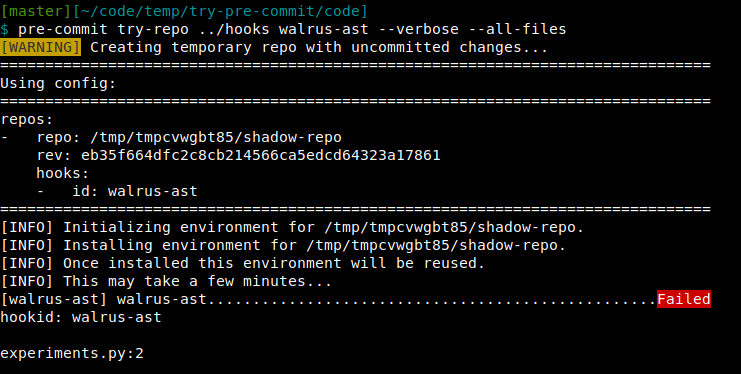 Reminder on how experiments.py looks:

The ":=" is indeed on the second line, and the one from comments is not reported. Thanks, AST!

Note: And if you forgot that this is Python3.8 only thing - you'll get (hopefully) some indication. In that case hook doesn't work, but shouldn't stop others from doing their job either.

It was not my intention to stop you from using assignment expressions, rather to play with new things and describe the process.

Let's approach the idea from the opposite direction and find a place where walrus can fit. Thanks to this tweet and very interesting library by Chase Stevens we can find such places. 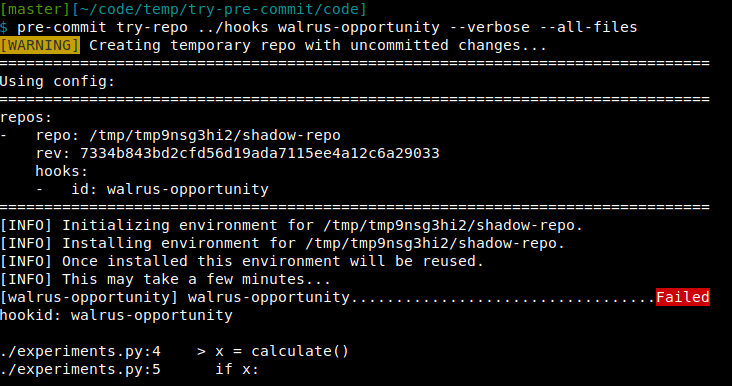 If you decide that local development is done:
Push hooks folder to your-repo (e.g. on github), create code/.pre-commit-config.yaml

And now you should be able to use git from code repo as usual: change files, stage and commit them. Before each commit git will run a script from code/.git/hooks/pre-commit. And pre-commit framework should show report and allow commit if everything is OK, or show report and abort commit if some checks have returned non-zero or files were changed.

More about AST visitors and working on the tree here.
Thanks to Anthony Sottile for such a wonderful framework.

The Correct Way to Overload Functions in Python