Hello Everyone,
After a long period of time, I am here again to write something in Algorithms and it's use in Real Life. So, let's begin with PID Controllers.

PID controllers are the workforce of the controls world. PID controllers have the goal of taking some error in your system and reducing it to 0. While there are many other control strategies out there PID is probably the most common (unless you count human control) outside of just setting a setpoint. There are many advanced control strategies out there but in most cases, they will do similar or worse than a PID and be much more complex. When the other methods do better it will often only be by a small amount. One exception is if you have a model of the device and its operating conditions you can create a feed-forward controller (good for Robotics students) that performs better. However, in many cases using reactive control with a PID is the easiest and fastest approach to implement.

When we talk about PID control you should remember that each of the letters represents a different mode of the controller. The P is for the proportional element, the I is for the integral element, and the D is for the derivative element. Each element has a “term”, that gets multiplied with those elements. We use K to be a generic constant value, so the constant terms (or gains) are KP, KI, and KD respectively. Depending on your application you may or may not have all three of the terms. In many applications, you will have just PD or PI terms.

There are many forms of the PID controller. But here are the two that most people will care about:

Note: e and e(t) are the error terms, this is defined as: e = desired_value – actual_value. Often the actual_value is coming from some sensor that you have to detect the current value.

The first is in continuous time:

The second is in discrete time, which is what is more commonly used in computer-controlled applications:

And here is some code for the PID controller: 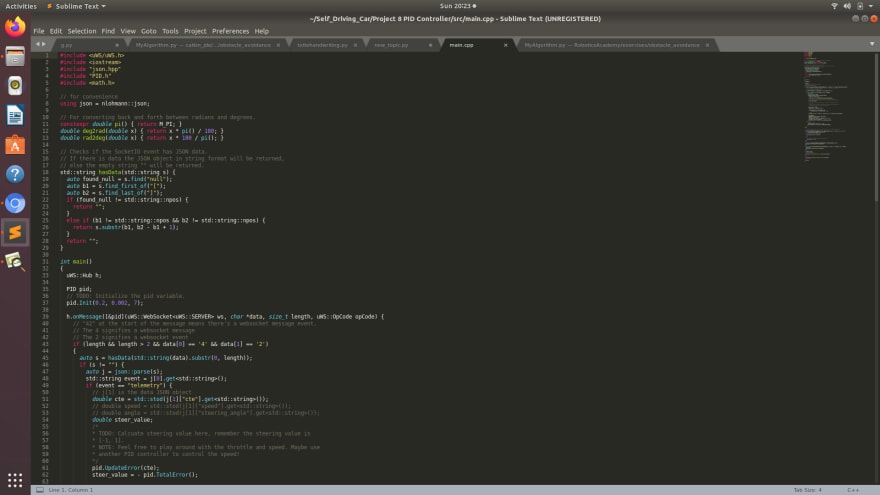 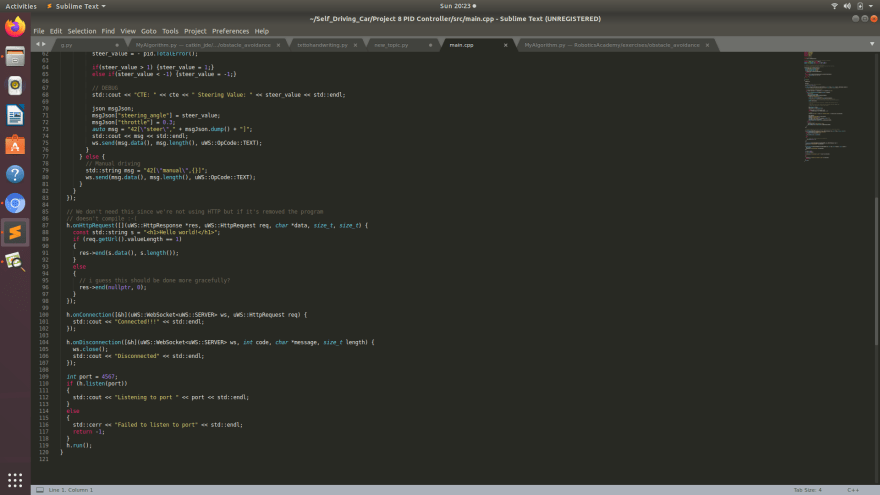 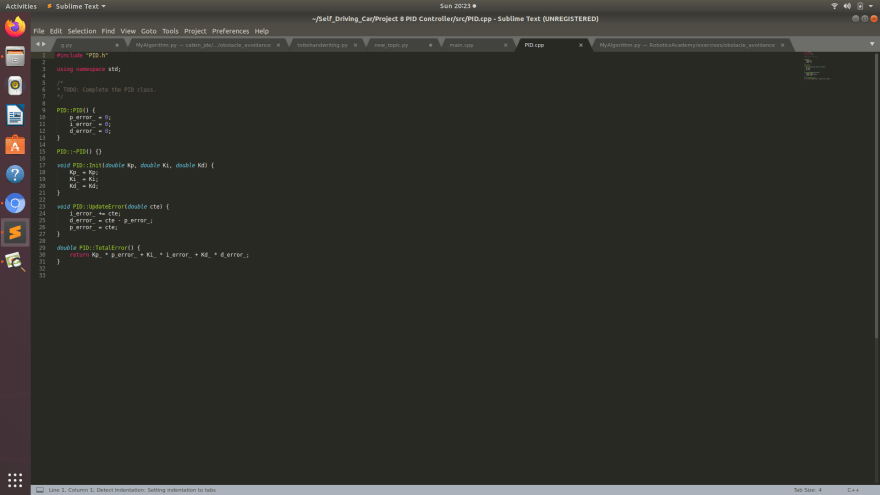 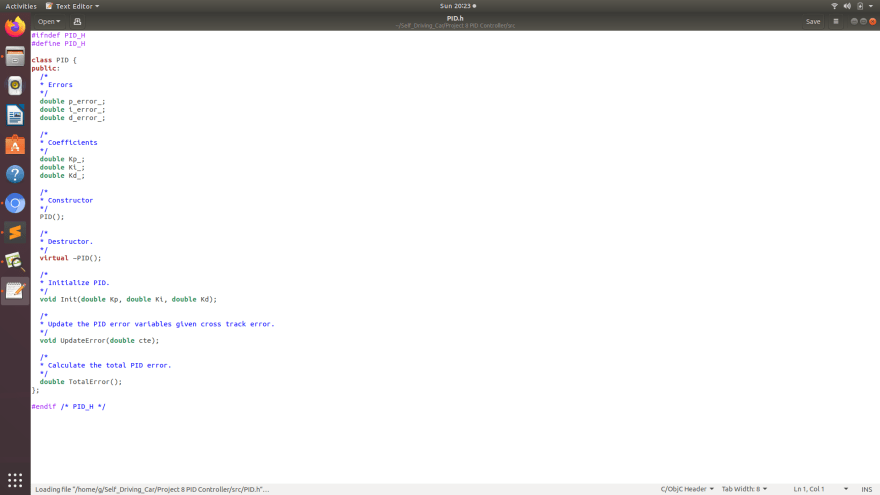 While the discrete approach is more useful from an implementation perspective. When it comes to understanding and tuning your controller the continuous approach is important for you to understand.

Also while you usually do not see the bias term added to the filter, I like to put it in just in case everything else sums to 0 and you still need motion, I will not have a 0 as the output. This is not strictly needed but it is nice to have in many cases. For example, if a wheel needs to continuously be rotating and the PID is just to maintain a given velocity.

So now we know the form of this controller we can look at what each term does.

Proportional Term (KP)-
The proportional term is your primary term for controlling the error. This directly scales your error, so with a small KP the controller will make small attempts to minimize the error, and with a large KP, the controller will make a larger attempt. If the KP is too small you might never minimize the error (unless you are using D and I terms) and not be able to respond to changes affecting your system, and if KP is too large you can have unstable (ie. weird oscillations) filter that severely overshoots the desired value.

Integral Term (KI)-
The integral term lets the controller handle errors that are accumulating over time. This is good when you need to handle errors steady-state errors. The problem is that if you have a large KI you are trying to correct error over time so it can interfere with your response for dealing with current changes. This term is often the cause of instability in your PID controller.

Derivative Term (KD)-
The derivative term is looking at how your system is behaving between time intervals. This helps dampen your system to improve stability. Many motor controllers will only let you configure a PI controller. In some cases, this can be negative.

In many applications, you will not use all 3 terms. So why not just always use all 3 terms? The fewer terms you use the easier the controller is to understand and implement. Also as you will soon see some modes can cause instability (ex. extreme vibrations) in the controls.

Just about every filter will have the P term. So let's just assume that KP is in our filter. Now the question is do I want to add just I, just D, or both into my filter.

If you want you can only have a P term. This is the simplest type of controller to tune since you only are playing with one value. The downside is that your controller will not smoothly correct itself for sudden and sustained error.

If you add a D term you will be more susceptible to noise and random values. So if you have very noisy data or random impulses that your sensors measure, you might want to leave the D term out. The downside of leaving the D term out is that you are not responding to those random values that might be legitimate, so you will have a slower response time. An example of this is if your motor hits a rock it will take longer to increase your commanded value since you are not looking at how the error is changing with time. However, if you are working on a robotic arm you might want the D term so you can quickly respond to changing forces.

The I term gets tricky. In many cases, you will want the I term so you can recover from an error that is slowly accumulating. The downside is that the I term is slow to respond. This slowness can lead to instability in your control.

How to tune your filter?

Tuning a filter can be difficult since a device (say a motor) might need to respond to different conditions. For example, if you tune your motor with no load it might not perform optimally with a load, and if you change the load you might need a different set of values to get optimal control. So often you are trying to find a set of parameters that works best in all cases and not necessarily optimal for any given case. There is another approach where you get different constants (the K values) to use in the filter and you choose which set to use based on the actual values in the system.

There are many ways to tune a PID controller. The two best ways that I know are manual (I know people don’t like manual things that rely on having an expert around) and Ziegler–Nichols method. With that said I have found that I can get better results by manually tuning a system, however, you can use the Ziegler–Nichols method as a starting point.

If the system is online, one tuning method is to first set KI and KD values to zero. Increase the KP until the output of the loop oscillates (or just performs well), then the KP should be set to approximately half of that value for a “quarter amplitude decay” type response. Then increase KI until any offset is corrected insufficient time for the process. However, too much KI will cause instability. Finally, increase KD, if required, until the overshooting is minimized. However, too much KD will cause slow responses and sluggishness. A fast PID loop tuning usually overshoots slightly to reach the setpoint more quickly; however, some systems cannot accept overshoot, in which case an over-damped closed-loop system is required, which will require a KP setting significantly less than half that of the KP setting that was causing oscillation.

Another heuristic tuning method is formally known as the Ziegler–Nichols method, introduced by John G. Ziegler and Nathaniel B. Nichols in the 1940s. As in the method above, the KI and KD gains are first set to zero. The proportional gain is increased until it reaches the ultimate gain, KU, at which the output of the loop starts to oscillate. KU and the oscillation period PU are used to set the gains as shown:

So, this was all about PID Controllers and my working in the same for Various Projects. I hope you like it and if you have any doubts do comment down below.

Gunjan Giri
A Guy who loves to Code and is Passionate about Robotics.
If you weren't a software developer, then what?
#devjournal #programming #beginners #discuss
Which headless CMS would you recommend for a blog site?
#discuss #help #beginners #webdev
Meme Monday! 🥸
#discuss #watercooler #jokes

Once suspended, gunjangiri will not be able to comment or publish posts until their suspension is removed.

Once unsuspended, gunjangiri will be able to comment and publish posts again.

Once unpublished, all posts by gunjangiri will become hidden and only accessible to themselves.

If gunjangiri is not suspended, they can still re-publish their posts from their dashboard.