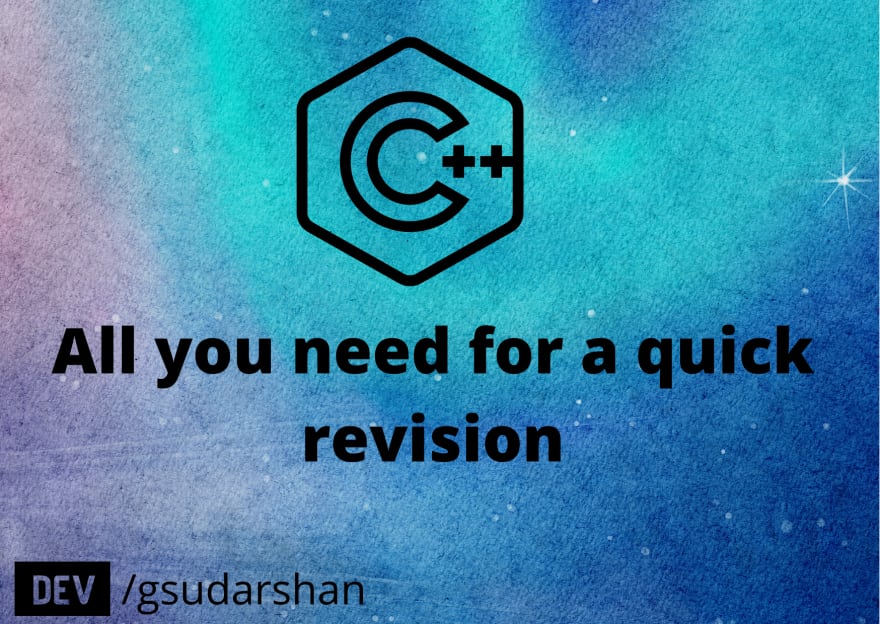 The following table shows the variable type, how much memory it takes to store the value in memory, and what is maximum and minimum value which can be stored in such type of variables.

There are two kinds of expressions in C++ −

When a local variable is defined, it is not initialized by the
system, you must initialize it yourself. Global variables are
initialized automatically by the system when you define them as follows −

A program can have same name for local and global variables but value of local variable inside a function will take preference.

A reference variable must be initialised at the time of declaration

Following are other examples of various types of Integer literals −

You should not consider the value of true equal to 1 and value of false equal to 0.

There are certain characters in C++ when they are preceded by a
backslash they will have special meaning and they are used to represent
like newline (\n) or tab (\t). Here, you have a list of some of such
escape sequence codes −

There are two simple ways in C++ to define constants −

The type qualifiers provide additional information about the variables they precede.

The modifier volatile tells the compiler that a variable's value may be changed in ways not explicitly specified by the program.

A pointer qualified by restrict is initially the only means by
which the object it points to can be accessed. Only C99 adds a new type
qualifier called restrict.

an object created inside a block using new, will remain in existence until explicitly destroyed using delete

the first dimension of array may be variable whose value is supplied at runtime . All others must be constants

like any other operator new and delete can be overloaded

operators that cannot be overloaded

Casting operator function should be

One class to another class type

Such conversion between objects of different classes can be carried out by either a constructor or a conversion function.

In case of conversion function , conversion takes takes place in source class and object is returned to destination class.

In case of constructor, conversion take place in destination class.

also know as Do nothing functions

STL contains several components but at its core are three key components. They are

compare () compares the strings s1 against s2 and assigned 0 if the strings are equal, a positive number if s1 is lexicographically greater than s2 or a negative otherwise

Nobody talks about this in the IT world

Once suspended, gsudarshan will not be able to comment or publish posts until their suspension is removed.

Once unsuspended, gsudarshan will be able to comment and publish posts again.

Once unpublished, all posts by gsudarshan will become hidden and only accessible to themselves.

If gsudarshan is not suspended, they can still re-publish their posts from their dashboard.