Poetry, pyenv and other rascals

In short pip just provides tooling around downloading packages from Python Package Index – PYPI. It's a default index of Python packages where almost anyone can add packages. Default is a good word, because pip allows us to use different indexes. So for example your company could have it's self-hosted version of packages and then use it as a private version of pypi. This allows for example better packages verification, only private network calls during CI/CD/development processes. It's quite interesting option especially given latest malicious attacks on popular Python open source packages.

What exactly is a Package Index?

Actually nothing complex. It's just a http server, let's say, that provides a list of bundles of Python code – packages and some metadata about them. Nothing more.

Fun take-home assignment to experiment with something new: try to implement your own version of pypi and add there certain features like token-protected package access or even more tokens with granular permission feature.

Usually the case is that we have one, maximum two backwards incompatible versions of Python installed on our machine. In the past it used to be Python2 & Python3, Nowadays most of the time just Python3 is installed as Python2 reached EoL.

Anyhow. This means that in the Dark Ages or by default one would install the packages globally, for the whole system. That’s is bad for multitude of reasons. As for what installing package means, in a very big summary, it’s nothing more than downloading a bundle of python code structured in a certain way, that gets downloaded and put in a given directory of python installation, with additional steps possible inbetween.

To combat the problem described in the previous paragraph -> packages getting installed globally, virtualenv came around. In short, it’s something that allows us to "create" another, "instance" of installation of Python. Eg. For a given project only instead of system-wide.

This way we can have various python package versions for various projects.

What if pip and virtualenv had a love child that was also doing steroids? Well, we'd obtain Poetry.

The problem with pip is usually dependency version management.

Even if we know, our project A, requires package Z in version 1.0.0, usually at the first glance, pip doesn’t tell us about the dependencies of this Z package.

Usually it’s not a dependency hell like in the JS worlds, but at some point it can also get a bit tricky if you only lock the dependencies at the top level.

And at some point, when you reach corporate-level size of a project, it’s almost guaranteed to have problems with this. Also if the versions of these dependencies aren’t guaranteed by default what about debugging?

I mean one build could have versions 1.2.3 of some dependency of a dependency, but another build, done 10 minutes earlier could have 1.2.2 if the versions aren’t resolved in a deterministic, guaranteed way. It enables nasty bugs to appear.

This also is a security risk, because if you do not know what version of the dependency exactly you have, a malicious version might find their way in without our explicit knowledge, which is a vulerability introduction opportunity.

And also we have a clear account of their versions,usually signed with a hash*.

This allows something called deterministic builds which is one of the keys of modern CI/CDs and apps that adhere to the Twelve-factor app pattern.

This is exactly what Poetry does and it does this well.

Other than that, while we are at it, poetry also makes projecet management easier, takes care of creating and managing virtualenvs for you and enables easier, more centralised project configuration by introducing pyproject.toml

Oh also, it makes building the packages easier as it can bundle your python code and publish it to the package index of your choice.

Python is a peculiar little animal that sheds its skin from time to time. Meaning Python itself, other than our dependencies, also has it’s own versions. Each version contains new features, various improvements. Some of them are sometimes even backwards incompatibile.

By default it’s not trivial to install various python versions and have them working properly on the same machine.

Why would you need that? Well, same as with dependencies. One project could depend on Python 3.10, the other on 2.7 and some other on 3.12.

We need something like virtualenv, that would provide isolation, but instead of a project-level for python dependnecies, instead for the system on the python version level.

With pyenv. Juiced up pyenv with a neat plugin that let’s us create virtualenvs from different python versions/interpreter implementations.

Pyenv + pyenv-virtualenv is also nice in regard of integration with poetry. 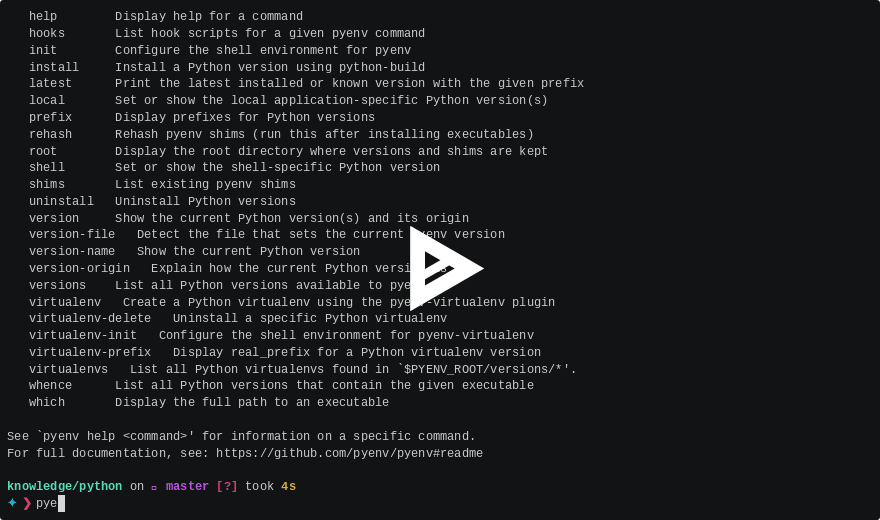 If your project is simple enough or you do not want to be bother will all of the previous things you can use pip-tools to pin your dependencies and all that.

Check out my other articles:
Tenancy pattern in a SaaS product
How I created my own blogging system in less than 100 lines of code
Three types of managers - which one are you?
How to write README files like a pro

VS Code Extensions I Use For Programming And Writing

Once suspended, grski will not be able to comment or publish posts until their suspension is removed.

Once unsuspended, grski will be able to comment and publish posts again.

Once unpublished, all posts by grski will become hidden and only accessible to themselves.

If grski is not suspended, they can still re-publish their posts from their dashboard.

Once unpublished, this post will become invisible to the public and only accessible to Olaf Górski.

Thanks for keeping DEV Community 👩‍💻👨‍💻 safe. Here is what you can do to flag grski:

Unflagging grski will restore default visibility to their posts.