The following is part of the /var/log/secure file on my server.
The entire size of the original file is several hundred MiB.

I had to convert the datetime at the beginning of the line to UNIX time (don't ask me why) while logged in with SSH.
As shown below is what I wanted.

I would like to finish this kind of work EASILY on the terminal.

So, how would you get this done?

I've prepared a sample file (extracted one is 100 MiB), so if you're interested, please give it a try.

Overview of this article

Answers for the question

Back to the story, I'll show you the most common answers to the questions.

If you notice that the datetime can be parsed with the date command, you can use the while statement of Bash to read and format each line as shown below.

However, this is a bad practice that beginners tend to do. This method is extremely slow. It is only a few tens of "KiB" per second in my environment (t3.medium instance on AWS). Let's measure the speed with the pv command1.

Let's say the processing speed is 100 KiB/s, it will take 17 minutes to complete a 100 MiB file. If the file is 1GiB, it will take 175 minutes!
This is not good for the environment because it requires much energy to convert😢🌎 , and it may cause the SSH session to run out.

This is not just a problem of while statement. All the ways to make the date fork every line have essentially the same problem. Calling the date from xargs, awk, or perl, for example, is similarly slow.

OK, let's try another idea. Extract the datetime first, and convert them into UNIX time, and save the result to seconds.

After that, combine them with the rest of the file.

It's a bit of a hassle, but if you have plenty of disk space, this is a good way to go. Furthermore, this method is relatively fast.

But in real-life situations, this method may take more effort than expected.
Typically, huge log files are often partially corrupted like this.

Bit flipping and undefined behavior on the software, OS, memory, and file system can easily create such a file. For example, HTTP logs provided by NASA is in a similar situation.

Who can guarantee the correspondence between seconds and the original file2?

In many cases, this method risks wasting a lot of time and effort on file normalization. Besides, this idea is less generic because it cannot apply to Apache's log (the datetime is NOT at the beginning of the line) like NASA's one.

If you are familiar with the command line, you can think of a way to convert it using the built-in features of an interpreter language such as awk, sed, perl, or ruby. It's probably the best answer so far, but this way involves a lot of hard work.

First, let's use the one called awk3.

It would be better to use mktime. If you give numbers following "YYYY MM DD HH MM SS" format, you will get the UNIX time.

OK, it is enough simple so far. I searched on Google 4 and found that the name of the month (Jan, Feb, ...) can't be converted to digits by awk, it seems. So, I need a small code to convert it first.

I found a good sample on the Stack Overflow.

It looks like we can convert month name to the number in this way. This one-liner is what I created finally.

Some character is lost from the original file (all the colons : are removed from file). But it is ok for me. The speed seems to be satisfactory, and it took about 9 seconds to process a 100 MiB file. But it is a bit of a long "one-liner".

So, let's try it in perl. You may need an external module, but it's just a little shorter.

The above ways have the same problems as Answer 2 and do not preserve the integrity of the file. However, you can use a regular expression to convert the date having a proper format. But to do so, you may need to write even longer code.

Anyway, can you do the above way EASILY during logging into the server with SSH? For example, do you write the above code for every log of not only /var/log/secure but also Apache, etc.? This is not a one-liner, but a script, and it will kill your SSH session while you're staring at Stack Overflow.

Problems between Shell and UNIX commands

The question exposes the weakness of the Shell and UNIX commands.

That's why Shell is called a "glue language" sometimes. This idea is very powerful, but at the cost of it, each command cannot "choose what to process". As a result, most commands cannot handle the files or the input "partially".

On the other hand, some commands can "choose what to process". They are sed, awk, perl, etc. In other words, if the solution requires partial modification of the data, you have to use those interpreters.

Also, when using these commands, "choose what to process" and "process the data" must be done in the same world provided by the command.

That forces you to make a "script" (that is no longer the "one-liner" in many cases). Because in this world, you have to follow the restriction of the interpreter.

There is a way to create the one-liner as simply as possible without involving the above complications. It's calling the command from within the while statements or the interpreter.

But this way exposes another problem. If the processed data is large, it involves a lot of forks of processes like Answer 1. It may extremely impair the performance as mentioned above.

When I was thinking about the above issue, I thought...

"""
Isn't there a way to specify the area to be glued when gluing commands together?
Wouldn't the problems be simpler if we had something like "Masking tape" for example?
"""

As far as I could find, there was no command for such a mechanism.
So I took a long break to learn Rust and created a command called teip (called "téɪp", I assume).

Let's quickly show you the solution using the teip command.
This question can be solved as follows.

It's quite simple, isn't it?

The integrity of the data? Good question. When any inconsistency occurs, teip will print the error and terminate the operation.
See the manual in detail.

Besides, the above example is the simplest one. If you match the datetime using a regular expression like the one below, you won't get any data inconsistencies in this example.

Are you worried about the speed? This is also a good question.
Now let's measure it.

As you can see, teip is faster than all the other examples in my environment. As you'll see later, teip is a very high performer.

What teip technically does?

This command can be applied to any problem that requires "partial modification" such as modifying the Apache logs, the specific columns in the CSV or TSV file, only the contents of <body> in the HTML file, etc. Here are some examples introduced on the GitHub.

teip allows another command to "choose what to process". There are two benefits in this way.

First, any command such as grep, date, base64, iconv, fold, nfk, rev, tac etc, etc.. can now be used for partial modification, without interpreters and while statement! This makes your daily works more simple ones.

Second is performance enhancement. Let me show you the results of the quite interesting benchmark. Here is the comparison of processing time to replace approx 761,000 IP addresses with dummy string in 100 MiB /var/log/secure file. 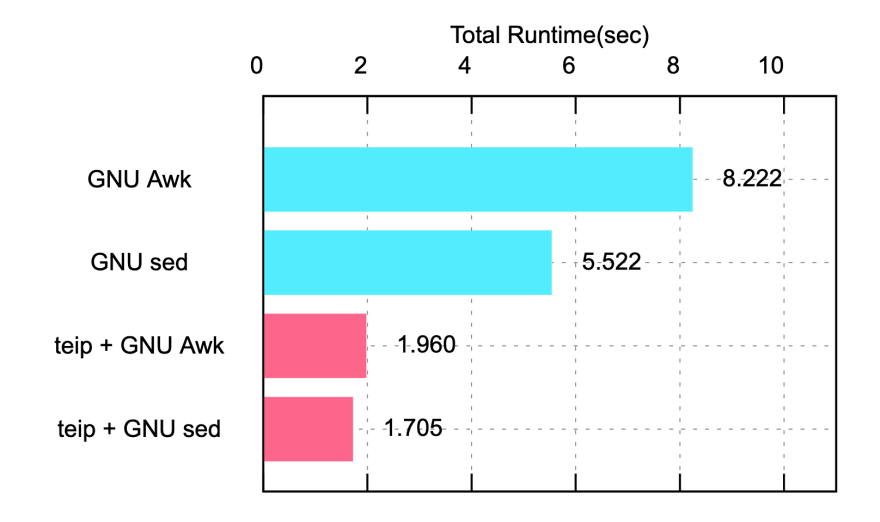 Believe it or not, the performance of GNU sed/awk together with teip is better than the same ones which run in a single thread - more than twice as much. If you are interested in, see Wiki > Benchmark.

The reason for this is that the "choose what to process" can be done in a separate thread in parallel. As a result, "Masking-taped" commands become faster because they only need to handle a limited amount of input. In this benchmark, the sed became faster because the number of backtracks performed by the regular expression is reduced.

With teip, you can easily get the troublesome work done that you couldn't do with the traditional UNIX commands and Shell environment before 😄

If you have any questions or pull requests, always welcome. Let's keep the environment together 🌎

Rust or Go for web development?

Show off your Terminal 🐱‍💻✨

Why and How I Replaced RVM with RBENV