Microsoft made very interesting announcements at .NET Conf: Focus on Blazor online conference. There are many great things are happening and Blazor is also making a fast progress on finding its way to mobile and desktop. Here’s the short overview of what’s happening and what’s coming next.

Blazor WebAssembly new features for May

Features of Blazor WebAssembly (aka client-side Blazor until now) were announced by Dan Roth:

Exploring Blazor Hybrid scenarios is one of major themes for coming .NET 5.

There has been some on-going work to get testing to Blazor world. Last year, in the end of August, Steven Sanderson blogged about prototype level test tooling for Blazor: Unit testing Blazor components – a prototype. Here’s the tweet by Claudio Bernasconi showing one Blazor test. 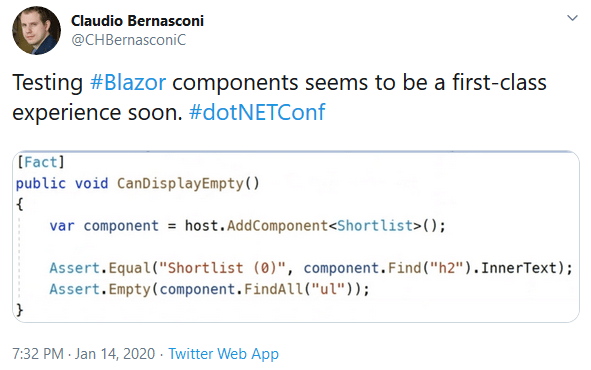 Steven Sanderson told about progress on Blazor assembly trimming to get smaller download size. Current default Blazor application is around 2MB. Blazor team has target of 1.5MB when Blazor WebAssembly is released at May. 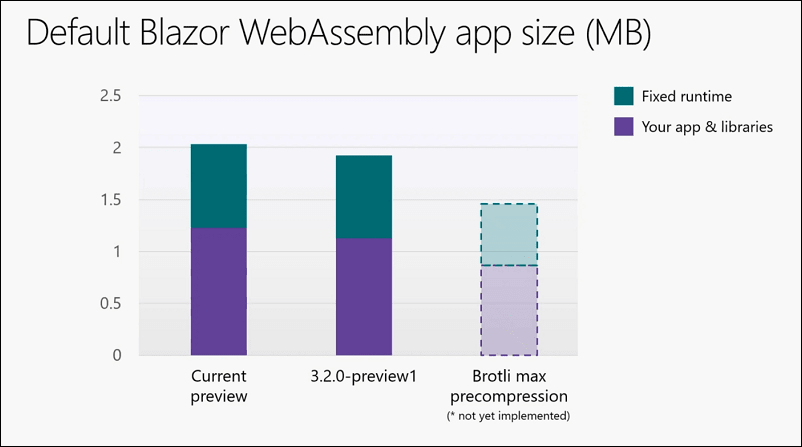 Videos of conference presentations should be shortly available here: https://channel9.msdn.com/Events/dotnetConf/Focus-on-Blazor

Check out if Carl Franklin’s Blazor Roadshow is happening somewhere near you. Dates in Europe and Canada will posted later. US dudes can make their plans already now. Event is free but be aware – the number of seats may be limited!

How to Build an Interactive SPA with Blazor