Some two days ago, I was thinking about how to optimize my way of navigating code through keybindings and I got this idea: what if I could just "point" the editor to the right place, without necessarily figuring out how to get there?

My first idea was to divide the visible editor's area into a grid in which every cell would have an assigned keybinding. In case there's more precision needed, there could be a second, smaller grid, made just of the cell that you selected before.

As I played with this idea in my mind, I decided that it's not really that great and not that easy to implement in a usable way. But then something else came to my mind...

Some months ago, when I was all about keyboard navigation and keybindings, I used a browser extension that allowed me to click on stuff based on 1-3 letter codes, popping up whenever I want to go somewhere. 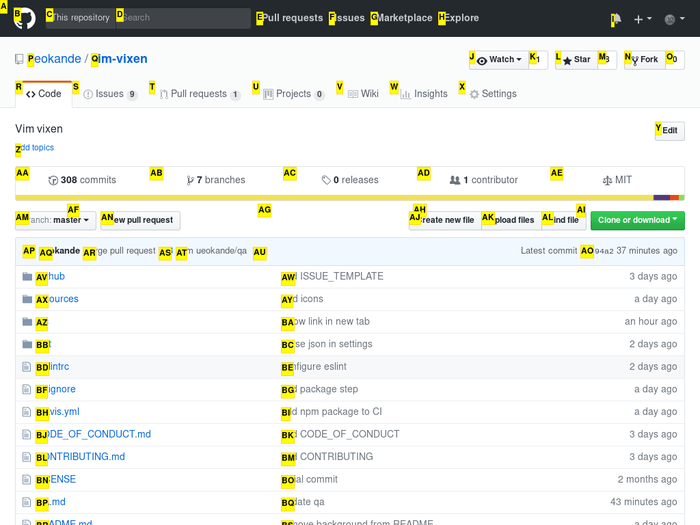 This way of navigating resonated much more with my inner dev and seemed much easier to implement for a complete noob such as me.

Of course, I started off by trying to find something like this implemented by someone else already, but I didn't really know what exactly should I search for, so after a few tries I've given up.

And so, yesterday and today, I've coded furiously, spending way too much time on this, but I have the basic idea working:

You simply press Alt+A and a list of "combinations" pops up in different places of your code. Once you type a character combination, you will be taken to the desired place in the code. While in "navigation mode", you can also scroll up and down using f and j keys respectively.

I have to admit that the code is far from perfect and it probably doesn't always work right. Still, at the same time, I'm super curious what other people (i.e. you!) think about it and I'm realistic enough to know that it will probably never be perfect.

So here it is, my first Visual Studio Code extension:
https://github.com/goyozi/visual-nav

Let me know what you guys think!

A One Piece of CSS Art!

Grzegorz Ziemonski
Code, games, cats. Opinions are my own.
TypeScript used to be on my $#!% 💩 list
#typescript #javascript #webdev #discuss
What's your favorite notetaking app?
#productivity #watercooler #help #career
Mistakes I made while learning Web Development as a beginner
#webdev #beginners #productivity #programming