Note: This article had to be edited to align with lessons from Beware of how you create a Task.

So this is it - I am finally ready to describe async/await and hopefully in later posts be in a better position to immunise you against common performance problems related to incorrect usage.

Strap yourself in for a long post - I promise it will be worth it if you want to better understand async/await!

I have described asynchronous programming. I have also briefly described why you might want to use Thread Pools. I then did another brief introduction to UI Threads.

Why did I do this rather than just slam you with an async/await example straight up? Well I think you need to understand the underlying threading model used lest you risk falling ill with thread-pool-starvitise or application-lockup-a-dilly. (Note in the next series I will cover how to diagnose these problems).

Simply: What is async/await and why would I use it?

Prior to the introduction of async and await, the code we had to write to get asynchronous behaviour was yucky. Code was strewn all over the place and it was very hard for a human to follow.

First let's do some work synchronously ...

In the example above, the main thread of the console application is blocked until the program execution completes.

Next let's do the same work asynchronously ...

In this second example, the code is almost identical to the synchronous example but we are now using the "await" keyword and "async Task" in the signature of Main.

So I guess you are now saying "So what?". Well with a few modifications to the asynchronous code, we can execute all jobs concurrently to the fullest extent of what the thread pool will allow.

Let's see a benchmark of just the JSON file deserialisation. You can skip the code because it's the graph afterwards that is what I really want to explain.

And now what is most interesting part is the graph ... 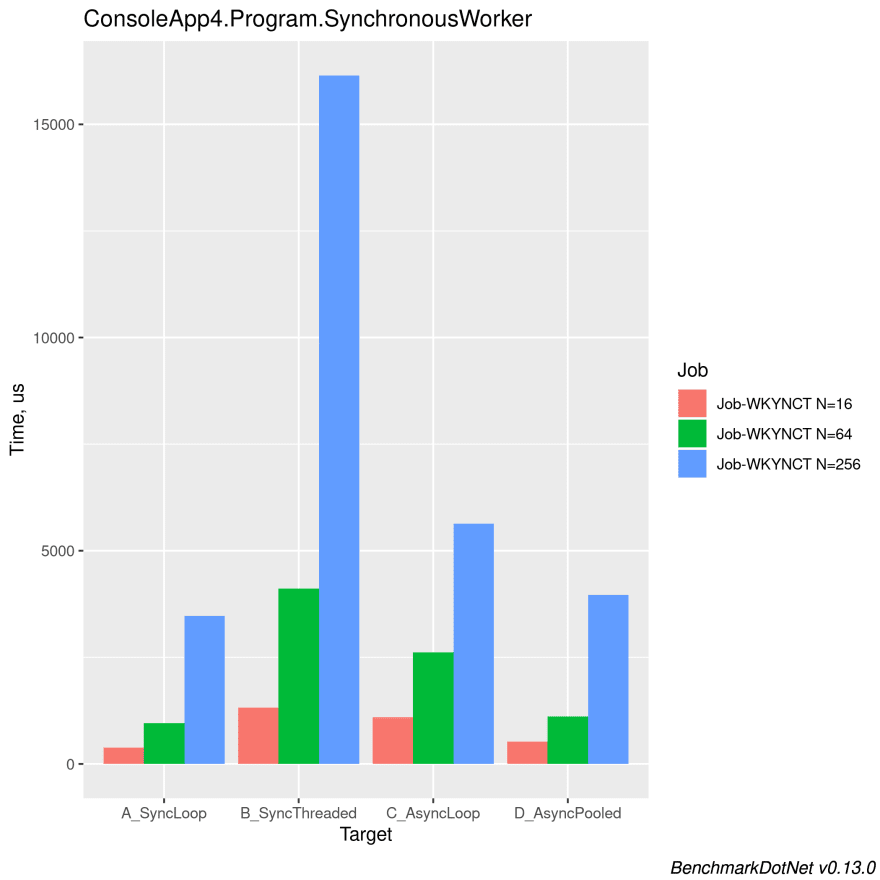 The only takeaway I want from this graph is that the de-serialisation of the JSON files that uses the Thread Pool generally executes in the least amount of time as the number of files to de-serialise increases. Using the async/await approach to use the thread pool is so easy it almost looks like synchronous code! (Note there is some overhead with async/await which makes the synchronous approach faster for a small number of files. But as the number of files increases, the Thread Pool really starts to shine and performance is much improved).

With respect to UI threads, using async/await is a no brainer. To get a responsive UI where the number of UI threads is usually 1, you have to use async/await to avoid blocking the UI thread.

More complicated: What is async/await and why would I use it?

You noticed in the simple explanation that instead of using Threads directly, we started to use Tasks. In the simple example, Tasks did not show up except for appearing in the signature of Main. However, the deeper you go, the more you need a quick overview of what a Task actually is.

Tasks are an abstraction of some unit of work that needs to be executed. Tasks promise to do something in the future and optionally return a result. There are 2 types of tasks: one that doesn't return a value and one that does return a value. Tasks are reference types and hence are allocated on the heap. Now async methods can actually execute synchronously in some circumstances (it's up to the Thread Pool to decide) so in simple cases you get penalised with quite a bit of overhead. (To minimise the number of heap allocations, a new ValueTask has been introduced with C# 7).

The async keyword is a flag to the compiler to transform the method and create an asynchronous state machine for for it. Let's write a simple async method and see what the stack trace looks like ...

The output of this program is ...

So like I mentioned earlier we are getting penalised with the overhead of the state machine creation without any benefit other than to show you the stack trace ...

So without going too deep, you can start to see some of the state machine in action when debugging the code. I must say the current stack trace looks quite intuitive compared to what it used to look like when async/await was released in C# 5! There are plenty of posts out there if you really want to get your hands dirty (like this one), but that is about as deep as I am going to go with async.

The await operator suspends the execution of statements until the asynchronous method completes. If the async method returns a Task of type T then a value or reference to T is returned. If the async method has already completed, the result will be returned without suspending the execution of statments. Note that the thread that has been suspended waiting for the result is not blocked.

In my next set of posts, I will go over common application misbehaviour that may be related to incorrect use of the async/await approach in C#.

How to shut the warning up when using the combination of Blazor code-behind, property injection, and C# nullable reference types

G.L Solaria
Windows by day, Linux by night
Locks are not guaranteed to be FIFO
#csharp
Beware of mixing blocking and async methods
#csharp #async #await
Beware of how you create a Task
#csharp