Often when developing complex projects, having a walk-through tutorial is exceedingly useful.

However, ensuring the validity of that tutorial is even more important. It's not going to help someone learn your system if your tutorial is broken.

One way to accomplish this is to automatically copy out all your code in a tutorial, and try running it, thereby testing it.

A good tutorial that is a walk-through will have sections of prose and sections of code. However, there also may be scattered blocks of sample output, which would break out algorithm of just 'run every code block'.

Thankfully there's a way around this: marking codeblocks.

In Markdown, you can flag blocks of code as being from different languages.

The outputs are slightly different (depending on your markdown parser), but what's important is the tagging used. We used python and ruby tags. But did you know that in GitHub-flavoured markdown, you can tag multiple languages? Check out this example and the raw markdown. 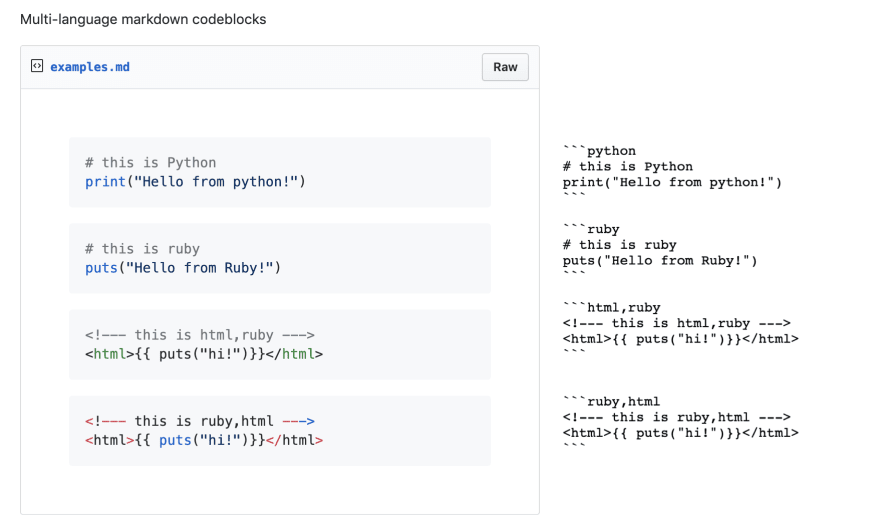 Depending on your flavour of markdown, only the first tag will be recognised and used as the type of highlighting to use.

Using this functionality, we can hide metadata in our codeblock declarations while still highlighting. For example, shell blocks, but also shell,sampleoutput blocks.

Then, we can create a basic parser that will, for markdown codeblocks, only copy out codeblocks marked shell, excluding any that have say "sampleoutput" as well:

In this example: for a tutorial with multiple shell blocks scattered around shell,sample and python blocks, only the shell blocks will be exported. These can then be tested by whatever your testing setup entails (recommendations for this is a story for another time :)

Important note: the "markdown parsers" used here are the parsers used in dev.to and GitHub Flavoured markdown. Other parsers may vary and may get very confused about the non-standard configurations.

Making an AR Game with AFrame

Katie McLaughlin
Developer Advocate @GoogleCloud. she/her. 🦜
How Good are You at CSS?
#discuss #css #webdev
💬 - What's the COOLEST Vim plugin?
#codenewbie #discuss #vim #help
How much experience you had, when you got your first dev job?
#watercooler #career #motivation #beginners