Rainmeter is a free and open-source desktop customization utility for Windows, released under the GNU GPL v2 license. It allows users to create and display user-generated customizable desktop widgets or applets called "skins" that display information.

There is a huge community of developers and artists that create the skins that make Rainmeter...rainmeter. You don't start off with much after installing Rainmeter, just a few system monitors: 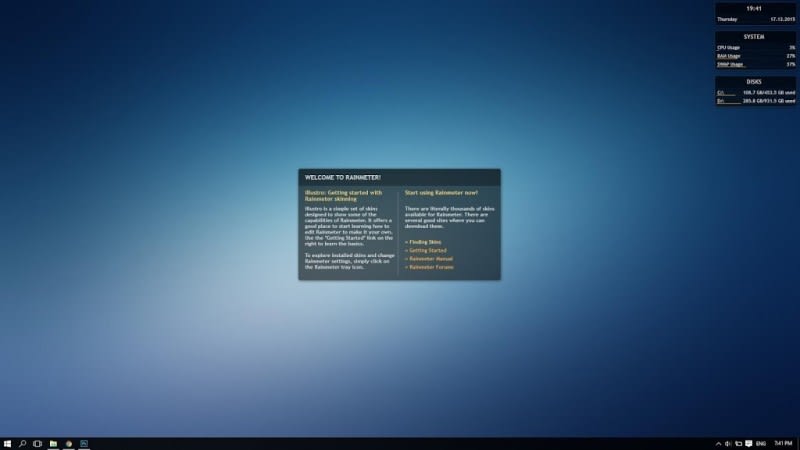 And that might be enough for you. Some people just use Rainmeter to keep an eye on system resources, and in fact a large number of the most aesthetically pleasing and most popular Rainmeter skins contain skins that are used for that very purpose. An example would be NXT-OS: 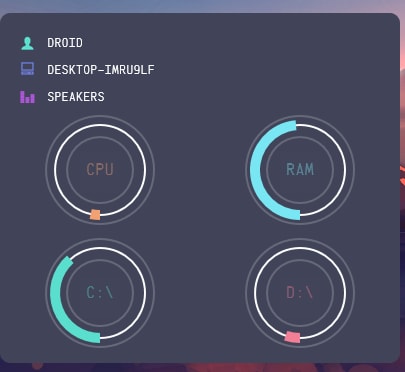 Sometimes you want to have a skin that can remulate a movie or video game: 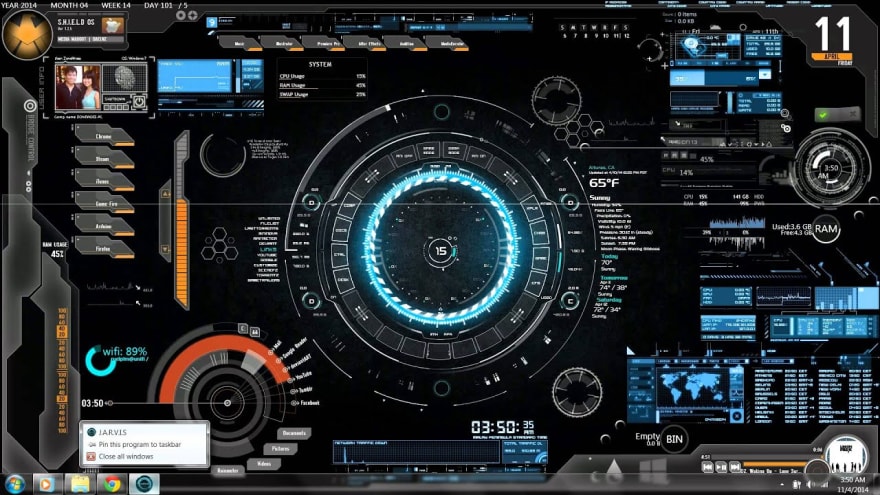 A very popular choice amongst Rainmeter hackers, the Jarvis/SHIELD OS skin copies the GUI from the successful Ironman movie franchise and while it's quite full on, if you're a fan of Ironman it's something you'd like. There's other "suites" of skins like the Jarvis one for Star Wars (for example).

I've messed around with Rainmeter for a good four years now, and I've shifted my design mentality towards a more minimalistic style than I had before. I've got a ton of skins and I'll be sharing them to Github if you'd like to check them out; however there's only about 4 or 5 skin sets (more commonly referred to as suites) that I have in my current setup.

I'd like to get into designing and creating my own rainmeter skins one day, but for now I make do with browsing the Rainmeter category on DeviantArt and there's tons of talented individuals there. I'd also recommend checking out the official Rainmeter group on Deviantart.

Here's a list of the suites that I use (now, I don't use an entire suite, rather a collection of skins from different suites): 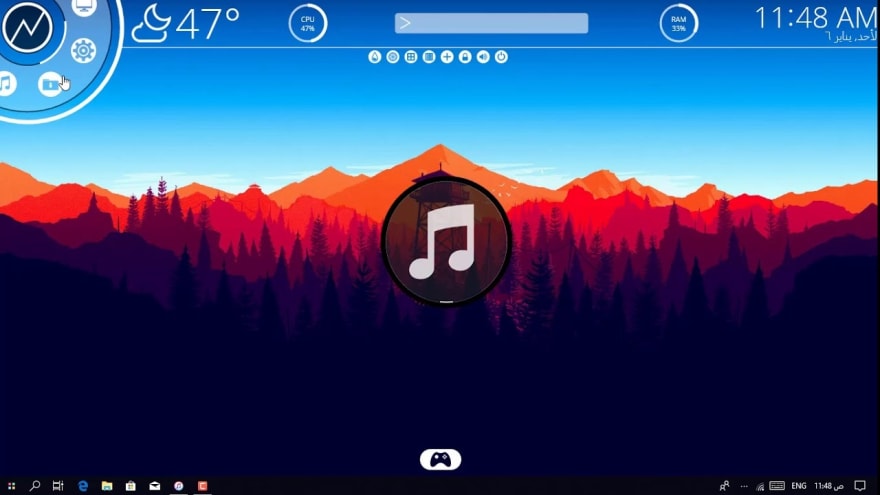 This is one of the largest and most popular suites across the entire internet. It really fits the bill as a suite as after installing it a settings pane opens up and it sort of feels as if you're installing a software update on your computer. Some of the best skins it includes are:

Right now, I only use the Steam game drawer - which is really elegantly designed, by the way - and it sits in the lower-right hand corner of my setup. 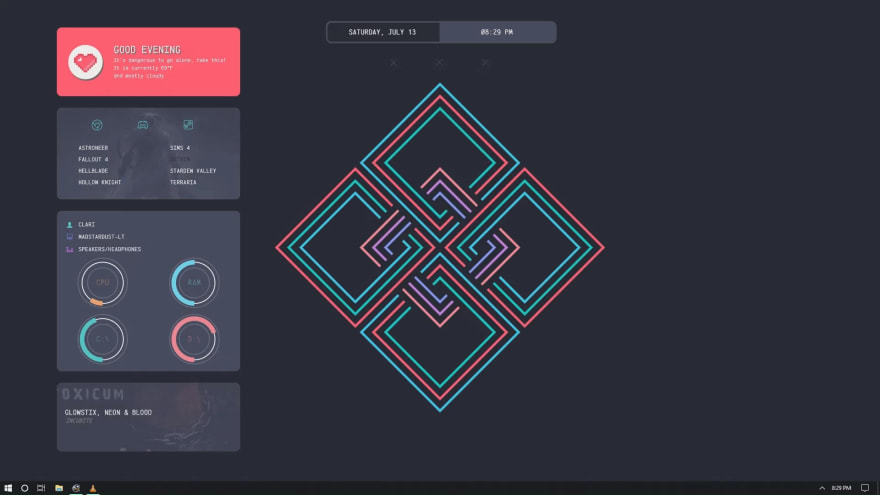 One of the really cool things about this is it comes with two different modes: "Pollux" and "Castor", with the former being (by default) for games and the latter being for work. When I first read about Gemini I heard that it included an automatic linking to your steam account (like NXT-OS does), however I had to edit the .ini files instead as I couldn't figure out a way to add my games and apps automatically. I'll probably need to edit it again in the future as I didn't realise there was a quick toggle option to switch between Pollux & Castor, and I ended up with 4 games and 4 work apps on Pollux; I'll be fixing this up and sharing it with you in an edited version of this article.

It also comes with a simple, minimalistic clock. I only discovered it today and it's one of my favourites already.

Here's the (so far!) finished product: 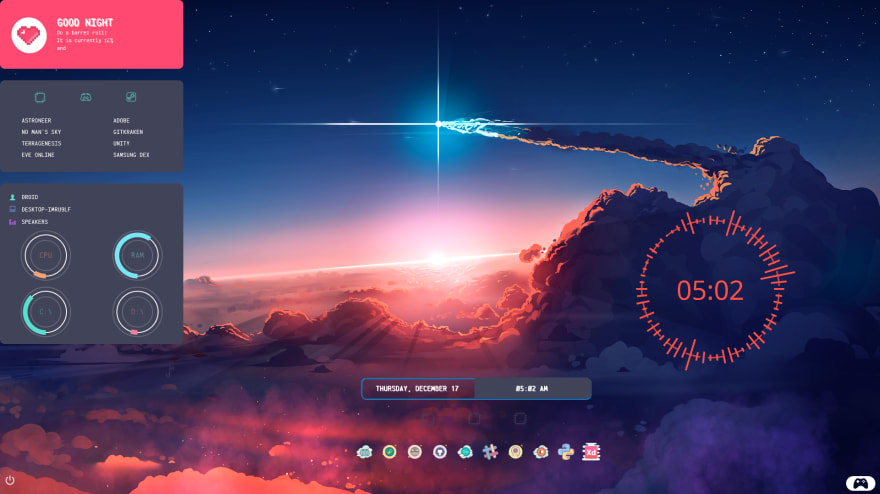 Getting Started with Clojure, Even on Windows

Once suspended, gizmotronn will not be able to comment or publish posts until their suspension is removed.

Once unsuspended, gizmotronn will be able to comment and publish posts again.

Once unpublished, all posts by gizmotronn will become hidden and only accessible to themselves.

If gizmotronn is not suspended, they can still re-publish their posts from their dashboard.

Once unpublished, this post will become invisible to the public and only accessible to Liam Arbuckle.

Thanks for keeping DEV Community 👩‍💻👨‍💻 safe. Here is what you can do to flag gizmotronn:

Unflagging gizmotronn will restore default visibility to their posts.