We know what are Streams from the previous article I posted - Introduction to Java Streams API.

Let us deep-dive into Streams API, know how they function.

A Java Stream is composed of 3 main phases.

Note: When defining a stream, we are just declaring the steps to follow a pipeline of operations, they won’t get executed until we call our terminal operation. 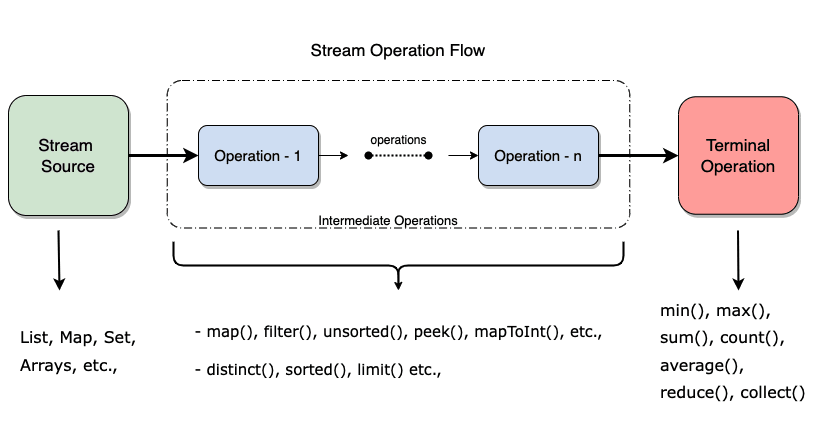 They are always lazy, executing an intermediate operation such as filter() does not actually perform any filtering, but instead creates a new stream, when traversed, contains the elements of the initial stream that match the given predicate.

Intermediate operations are further divided into stateless and stateful operations.

Terminal operations, such as Stream.forEach(...) or IntStream.sum(...), may traverse the stream to produce a result or a side-effect.

After the terminal operation is performed, the stream pipeline is considered consumed, and can no longer be used. If you need to traverse the same data source again, you must return to the data source to get a new stream.

Book is a POJO with a constructor, getters, and setters.

And finally out BookApplication class that does the declarative programming or immutability on each book object.

If we imagine Streams as streams of water flowing through a tank, then our job is to make use of each byte that gets out of the tank through the pipe with Stream API methods.

Gopi Gorantala
After working on European govt projects in Belgium(Europe) and US tech giants from India for a decade, I decided to enter the life of a freelancer. I had roughly 10 years of experience under my belt..
How To Solve Missing Number Problem In Java, An Amazon Interview Question
#java #algorithms #programming #beginners
What Are Java Method References And Kinds Of Method References Available?
#java #programming #beginners #tutorial
Introduction To Java Streams API
#java #programming #tutorial #beginners

Once suspended, ggorantala will not be able to comment or publish posts until their suspension is removed.

Once unsuspended, ggorantala will be able to comment and publish posts again.

Once unpublished, all posts by ggorantala will become hidden and only accessible to themselves.

If ggorantala is not suspended, they can still re-publish their posts from their dashboard.

Once unpublished, this post will become invisible to the public and only accessible to Gopi Gorantala.

Thanks for keeping DEV Community safe. Here is what you can do to flag ggorantala:

Unflagging ggorantala will restore default visibility to their posts.