Web3, and, in particular, blockchain technology, have brought significant changes to the digital world, especially when it comes to conducting online business. Let’s talk about how the Internet has progressed throughout the years and mention some of the key benefits Web3 offers to blockchain-based projects.
On the road to Web3: Brief history of the Internet
Over the years, the Internet has gone from simple web design to having the ability to create online multiverses.

The first generation of the World Wide Web, also known as Web1, emerged in the early 90s.

What can be described as the static age of the Internet, Web1 had very limited functionality, with users scrolling through readable digital pages, connected via links.

Web2 has taken the best features of the outdated Web1 and transformed the online space into something more than just lengthy pages.

With Web2 comes the age of social media. Starting now on, both individual users and business ventures - no matter how big or small - are able to create their own content. For the first time, consumers get a voice.

But that’s not all. The new version of the Internet has also brought major issues such as personal data infringement and online identity theft.

How is Web3 different from its predecessors? First of all, the introduction of blockchain technology has pushed the adoption of decentralization across the Internet. Decentralized applications are not reliant on third parties or any sort of middlemen. The information, stored on a blockchain, is open to the public and impossible to change.

Slowly but surely, Web3 is taking over the Internet. The World Wide Web as we see it today is very unlikely to disappear any time soon; however, the technology behind it might undergo some changes.

How Web3 could affect businesses

While the transition to Web3 is important to all Internet users, it is especially crucial for businesses planning to make use of blockchain technology. With Web3, privacy and anonymity are set by default, which is a drastic change from the current centralized governance. The ability to store data on decentralized, open-source protocols is fundamental to the development of the global web in the future.

As mentioned above, the decentralized Internet is most likely to keep the current way of user interactivity via exchanging messages, videos, and posts. However, with the emergence of metaverses, people can socialize with their friends and family in the virtual environment. What’s more, the metaverse is supposed to imitate real life in the digital world, meaning users would also be able to go shopping, visit banks and even go to a concert - all with the help of Web3.

The opinions on metaverses are still rather divided, with some criticizing the new technology for its lack of real human interaction, while others see it as the future of global business implementation. Big names, such as Nike, JP Morgan, and Samsung, have already “opened” their businesses in the metaverse.

Blockchain and Web3 are two technical terms often used in the same context. Simply put, a blockchain is a database shared and governed by a network of computers. The decentralized information is stored in blocks, which are later added together forming a chain.

What blockchain does is provide data accuracy. The information on the blockchain cannot be changed, it is immutable and permanent.

Blockchain transparency comes in handy when it comes to the digital finance sector. Thus, transactional data, recorded on the blockchain by various DeFi projects, is practically impossible to manipulate. Users get full control over their sensitive data, meaning that even in the case it is sold to a third party, the user must be notified and agree with the conditions of the transaction.

Nowadays, streaming services remain one of the most profitable industries, with millions of everyday users. We stream music, movies, tv shows, podcasts - anything and everything to our liking.

Naturally, Web3 is bound to affect big entertainment companies, which have been accused of exploiting users’ data for advertising purposes and prioritizing biased creators instead of giving every single one of them a fair chance.

With Web3, content creators are guaranteed to be protected from copyright infringement, due to the smart contract implementation. Besides, small artists get the same functionality as bigger creators, which provides them with an equal opportunity to locate their target audience.

Web3 is likely to intervene in most sectors of the Internet in the foreseeable future. Blockchain-based technologies might dominate the future of business ventures, meaning most companies may want to convert into decentralized software. 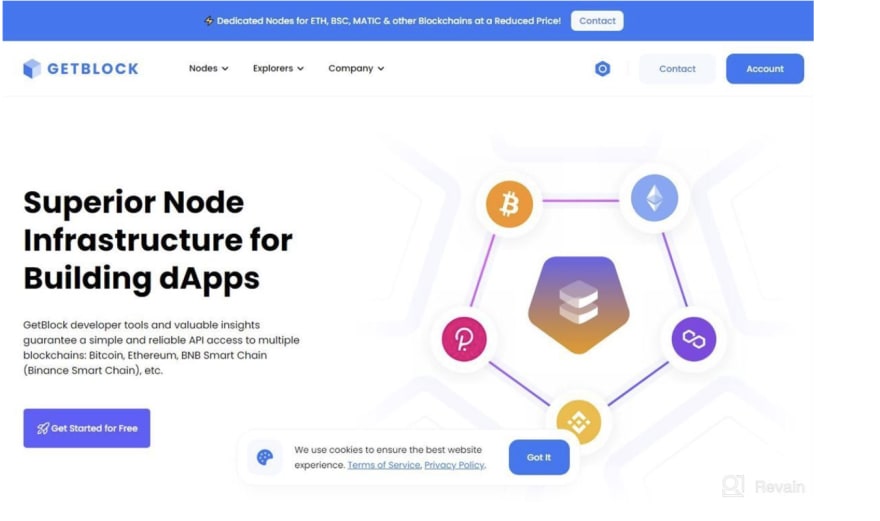 Web3 could also change the way employers attract and hire new talent since they would not have to concentrate their search on one particular geographical area. The recruiting landscape has expanded in recent years, from what we can already tell.

N.B. Check out GetBlock’s guide on how you can become a Blockchain Developer

With GetBlock, users are able to implement Web3 technology today! Blockchain nodes for over 40 leading networks are available on the website. Clients can choose between shared and dedicated nodes. There’s also an option to purchase node clusters for businesses looking for more complex scaling solutions.

Once suspended, getblockio will not be able to comment or publish posts until their suspension is removed.

Once unsuspended, getblockio will be able to comment and publish posts again.

Once unpublished, all posts by getblockio will become hidden and only accessible to themselves.

If getblockio is not suspended, they can still re-publish their posts from their dashboard.

Once unpublished, this post will become invisible to the public and only accessible to Jane Langley.

Thanks for keeping DEV Community 👩‍💻👨‍💻 safe. Here is what you can do to flag getblockio:

Unflagging getblockio will restore default visibility to their posts.