I've made an example Python program that does nothing more than load two tables into a form and then lets you filter the "child" records by selecting rows in the "parent" table.

The idea here is to show a minimal-imports method of displaying parent-child records using the stock Tkinter and SQLite Python libraries.

In short: you can find the code at this online Git repository where there's really just the one Python file.

Here's how it looks: 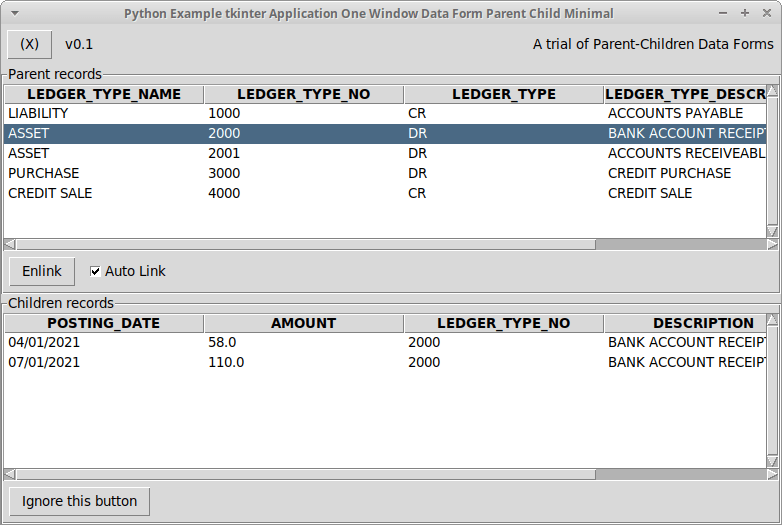 It came about after I recently watched a YouTube video by Data Analytics Ireland. My many thanks to them for sharing that, but I wasn't pleased with the amount of code I had to wade through just to find the parts that made and loaded the records and then responded to which was clicked. I also felt a chance was missed to enact a parent-child behaviour between the two tables.

I first made my own rebuild as a way to test what I'd gleaned - using my usual stock interfacing (that's elsewhere in my GitLab presence). But then I decided it was unfair of me to moan about examples having unnecessary things in them - unless I tried doing that myself.

I'll let the README at the respository speak for itself, but will here discuss some of the vital parts. I won't cover the SQLite parts, so I'm assuming the simple SQL SELECT statements are familiar - but do ask if you'd like those explained.

Here's the definition of the parent display control - using a Tkinter Treeview with added scoll bars and an action binding for when a row is selected.

Here's how the "parent" Treevew gets loaded, from two lists that were loaded via SQLite: a_rows & a_names for the data and column names.

Of course, if we're reloading a table we'll need to clear the TreeView first, and that's done with the following (doing the "parent" again to go with the above):

Choosing to the reload the chld table is a matter of constructing a new SQL SELECT with a WHERE clause - but how do we get the value to use?

Here's how I wrote that step - into a separate function as I toyed with it, and done in small steps as I worked them out.

Doubtless, people with better Python skills than mine could reduce that to something much shorter and harder to follow.

p.s. I didn't want to post the whole code here, even though it will probably fit well enough in a Dev post - I just didn't want to be updating it in two places if I make changes.

How to create a Python Lambda Layer?

How to setup MongoDB with Jupyter Notebook

Once suspended, geraldew will not be able to comment or publish posts until their suspension is removed.

Once unsuspended, geraldew will be able to comment and publish posts again.

Once unpublished, all posts by geraldew will become hidden and only accessible to themselves.

If geraldew is not suspended, they can still re-publish their posts from their dashboard.

Once unpublished, this post will become invisible to the public and only accessible to geraldew.

Thanks for keeping DEV Community 👩‍💻👨‍💻 safe. Here is what you can do to flag geraldew:

Unflagging geraldew will restore default visibility to their posts.