As app development is the core process to start any kind of on-demand online business, concentrating on it is very important. Consequently, the developers today majorly use the Laravel backend program on the basis of its powerful integration framework. Because of its notable advantages, the same source has been used in on-demand multi-service app development too. 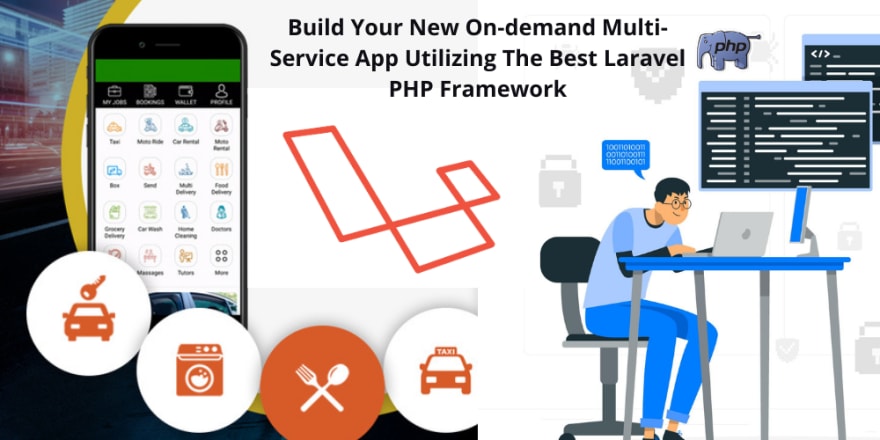 Though the multiservice apps are considered as updated stuff to individual on-demand service apps, it admires a lot of business personalities' attention. In response, we can find several entrepreneurs focusing on better multiservice app development for new business initiations nowadays.

Touching on it, let's discuss why Laravel is better for you to develop your multiservice app. And, how powerfully you can build your Uber for X multiservice app that competes with the demands faced by developers and entrepreneurs at present.

Why Laravel Backend Framework is the Best for On-demand Multiservice App Development?

As mentioned, the backend of an on-demand business app takes a vital role in its complete operation online. Thus, having a reliable and standard technology implementation to take care of progressive business data would be your developed app’s great victory in the market. In the Uber for X multiservice app development too, it acquires the below-mentioned major benefits.

Laravel backend makes your coding easier
Fast app development completion
The complete open-source helps you to make an affordable development cost
Modular approach possible for the convenient development processing
Your multiservice app could be smartly being updated with its powerful MVC Architecture.

Above all, you could get a lot more additions such as quick time duration to market, object-related libraries, composers, best routing, etc.

Top Features of Laravel for Your Effective Business App Creation

The comprehensive development framework for your multiservice app boosts an expressive syntax. Its effective feature options make your app development operation completely refreshed. This is how Laravel still stands to be a favorite one of contemporary developers focusing on its most developer-friendly nature and comfortability to build both desktop and mobile apps. In which, for your powerful multiservice app creation, refer to its top features in the following.

Your app development with Laravel allows you to easily take care of user authentication. As everything is already configured and built-in in the framework, you can also manage the assigning claimed access rights. To developers, it provides an organized way to outline the authentication logic.

The Laravel framework’s effective SwiftMailer library lets the notification integration can be used for simplified notification configuration for individual accounts. It supports sending notifications from multiple channels. So that alert transmission throughout the multiservice business in progress would be smoothened.

Automation checking is used to test your new multiservice app’s performance ratio. Representing how well a created solution works without any errors, crashes, or bugs. For this purpose, with the inbuilt Laravel framework’s checking options in addition to its support for PHP Unit test utilizing phpunit.xml, you can easily check the fundamental user activities to examine.

Laravel has a seamless database migration system. Because syncing with the database is a tedious task for developers, which also demands long timing hours to complete the task, Laravel’s seamless data migration allows you to easily enhance the quality of the database speedily without any compromisation in actual security.

Same as how the backend program is the core stuff in business app operations, its advantages are important for developers for purposes. Thereby, from the development to custom modulations, everything would be smart achievable at the end of the satisfying app design outlet. For example, the following core advantages of the Laravel framework assist you to build a gainful Uber for X business app.

Fast Cache Configurations - Since the Laravel backs are well-known for their cache backends, as a developer, you can configure a number of cache configurations fast.

User-friendly API Provision - As a developer, you can offer your client a clean and easy-to-use API through SwiftMailer Library. Its drivers let an app rapidly get ready-to-move, send notification alerts via cloud-based service.

Enhanced Monolog Library - Though the Laravel framework has been well integrated with the enhanced monolog logging library, it is much more useful for you. Through that, you are getting the support for handling a load of effective logs.

Powerful Routeway Identification - Each Laravel backend route is determined right in the App/HTTP/routes.php file. So it is naturally loaded by the framework. Additionally, offers a forceful method of determining route-ways through accepting URL along with a Closure.

In the real-time marketplace, your on-demand multiservice app performs sophisticatedly owing to its robust backend structure. Its development side of client-based captivations lets both the developer and the entrepreneurs get a win-win favor. Hence the newly developed Uber for X app possesses the main characteristics as follows, the business achieves a lot in real-time.

Though all the enhancements would be covered with your backend program, your multiservice app’s total functionality is seamless. So, even between a number of users accessing at the same time, your business app performs in a standardized manner.

Using its full easy backend programming modulation solution, you can develop the multiservice app as per custom-centric backend program requirements. Therefore, you can make your client better satisfied with your complete app creation task output for service initiations.

Laravel’s fast and fine backend development segments urge your new app-building right from the beginning. So it helps you to offer clients a fast and secure app development creation. Therefore, an immediate business launching as per the plan possible with its overall.

Great Base for Multi OSs

The adaptable Laravel framework allows you to code programs for a great backend operation functionality to your multiservice apps which are supported with multiple mobile phone/web operating systems. So, the entrepreneurs who require multi-OS supporting business apps could smartly get them all.

Above all, for a robust security requirement for your new Uber for X on-demand multiservice app, the Laravel framework inherently has many features and operations, which make your app more secure and powerful enough to prevent vulgarities.

Multiservice app development today increased amongst business personalities for their gainful startups online. Considering it, the developers using Laravel backend framework are vastly encouraged by them focusing on the programming advantages in the app’s functionality. Whereupon, Uber for X on-demand multiservice app which is developed utilizing the powerful Laravel framework naturally covers the discussed victorious benefits.

Use VSCode editor in your browser.