Giving some context to people who don't know what inkthought labs or the project is. Supernal is also a Discord bot with the concept of a non-bloated and fast solution to Discord tasks.

Supernal a bloated piece of s***. I'm astonished that I have hacked together such an unoptimised bot.

Let's talk about code bloat. In Supernal, this is the reminder function that executes every 5 seconds. It utilises a Mongoose "cursor" and a for loop, which basically loads all the documents to cache, and allows you to go through them one by one. Kind of like tabs in your browser. 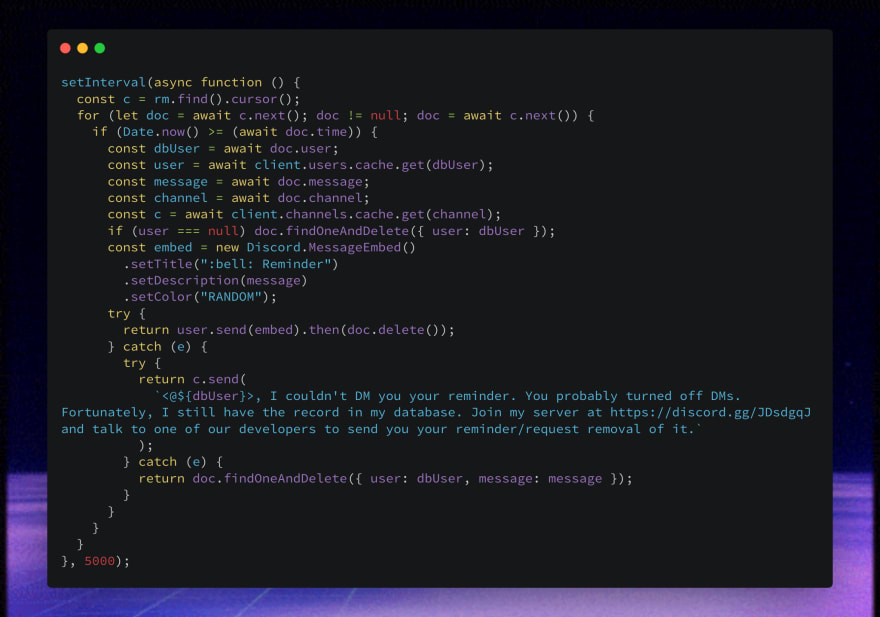 Over 30 lines just for this.

Plus, it's located in the main file.

This is an unscalable solution to check a MongoDB database, which is not even located locally.

Although the project was bootstrapped with create-discord-app, I've since then added all kinds of junk to the main file, causing slow response speed. The "message" event runs through tons of checks - including whether you are blacklisted from using the bot and others. This queries a database, which again is async, which takes time. This completely slows down the process.

What can I do to solve this?

Perhaps by reducing the number of database queries. But then I'm not quite sure what to do with the reminder function. (Let me know in the comments). I could also fix the blacklist and prefix database query issue by using loading to the cache.

Now, the bot has detached from the original idea of a non-bloat.

I'll talk about my other bot in another article. See you then.

Angular and RxJS on Mastodon

Once suspended, geneva will not be able to comment or publish posts until their suspension is removed.

Once unsuspended, geneva will be able to comment and publish posts again.

Once unpublished, all posts by geneva will become hidden and only accessible to themselves.

If geneva is not suspended, they can still re-publish their posts from their dashboard.

Once unpublished, this post will become invisible to the public and only accessible to geneva.

Thanks for keeping DEV Community 👩‍💻👨‍💻 safe. Here is what you can do to flag geneva:

Unflagging geneva will restore default visibility to their posts.