1) Each dapp can define its own custom interface
Whereas Gelato v1 imposed a “one size fits all” way of having developers communicate with Executors, v2 is significantly more flexible and opens the possibilities for an infinite number of implementations of how that communication is happening. Developers still do not have to reinvent the wheel and only have to write minimal smart contract code, because we came up with several “Service Standards”, which compose a standard set of functions and modifiers developers can use to automate certain functions on their dapps. More standards, tailored to specific sets of use cases, will be released shortly.

2) No need for proxy contracts
Whether services that are powered by Gelato v2 require a proxy contract or not is completely up to the developers’ to decide. This is no longer a requirement and there are a number of use cases that are already in development that will save users significant gas costs down the line by not requiring a proxy contract per user.

3) Off-chain data generation resulting in significant gas savings
Executors can implement custom logic off-chain that enables them to compute arbitrary data and pass those to smart contracts services, which save a substantial amount of gas that was previously used to fetch certain data on-chain. This capability also opens the door to more interesting use cases like off-chain conditions where data is not available on-chain, but more on that soon!

4) No pre-deposits and pay for transactions with any token you want
Transactions pay for themselves as long as Gelato is paid an amount equal or higher to what it pays out to its network of executors. In practice, a transaction can hence swap e.g. DAI to USDC on Uniswap, and send part of that received USDC to Gelato to pay for the transaction fee and the rest to the user.

5) Ability to submit tasks via Meta transactions
One pain point of Gelato v1 was that tasks had to be submitted on-chain, which meant that before anything got executed, users already had to pay for some gas (even if not that much). V2 supports meta transactions which means that users only have to sign a message off-chain that will be passed to the “Gelato Service Relayer” from which Executors can query the available tasks in order to execute them. This part will be controlled and maintained by the Gelato Core team for now and will be decentralized in the near future.

6) Coordinating bots so they don’t front-run each other
The problem with all “keeper” systems today is that they use gas price auctions in order to decide which bot will end up executing transactions. This results in a significant loss in value that leaks to miners. In the Gelato Network, Executors are coordinated by a soft off-chain coordination mechanism that allocates “slots” to different Executor operators. In those slots, these Executors are the only ones who can execute the tasks of a particular service. If an executor goes offline or fails to serve a specific slot, it will be kicked from the network. In the future, staking and slashing will add even more incentives for executors to abide by the rules and keep a constant uptime for their servers. 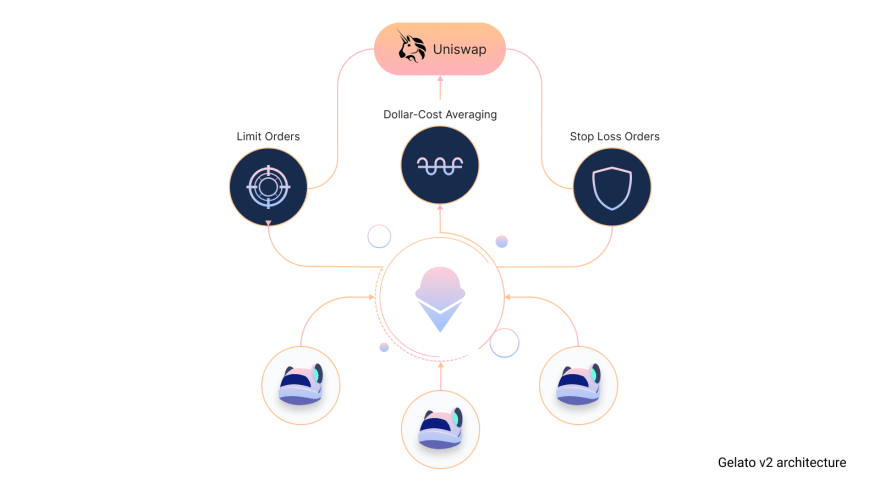 We envision Gelato v2 as an ever-changing and improving networked service for developers that will constantly adapt in order to guarantee the automation of transactions in a reliable and efficient manner. Most of the security-related code was externalized into the service contracts and thus services can be assured that even if Gelato is maliciously taken over, their services are safe. For this reason, we choose to implement Gelato v2 using the Diamond Standard, otherwise known as EIP-2535. The upgradable protocol is secured by a multisig controlled by the Gelato Core development team, however, there are already concrete plans to transition this control over to the upcoming GelatoDAO, which will launch in Q2 this year.

Gelato’s v2 was built to complement next-generation protocols like Uniswap v3, which leads to a lot of features open-ended for third parties to build out. For instance, Gelato can automate a variety of functions of Uniswap v3, including reinvesting fees back into the pool, converting LP NFTs into wrapped ERC-20s, and automating LP price ranges.

As demand for smart contracts automation increases in the DeFi ecosystem, there is an even greater need for a cost-efficient and more flexible off-chain solution. That is why we launch Gelato v2 to help and empower the developers to build unstoppable DeFi dapps.

--
If you have any questions or need help to get started, please reach out to us in our Telegram community or email us at hi@gelato.digital.

We are looking forward to building with you!

The best way to promote your NFT collection

A Comprehensive Guide on Web3 Programming Languages and Tools

Once suspended, gelato will not be able to comment or publish posts until their suspension is removed.

Once unsuspended, gelato will be able to comment and publish posts again.

Once unpublished, all posts by gelato will become hidden and only accessible to themselves.

If gelato is not suspended, they can still re-publish their posts from their dashboard.

Once unpublished, this post will become invisible to the public and only accessible to Gelato Network.

Thanks for keeping DEV Community safe. Here is what you can do to flag gelato:

Unflagging gelato will restore default visibility to their posts.