Don't get me wrong, I really like virtualenv and it's pretty useful in some scenarios. But sometimes you have to deal with OS dependencies and that forces you to install new packages and it can get a bit messy in some scenarios.

If you haven't heard about Docker (containers), you can read more about it at https://www.tutorialspoint.com/docker/index.htm

You can think of docker as a micro vm without all the overhead of a Virtual Machine.

It should return a Hello

Here are the videos for these steps 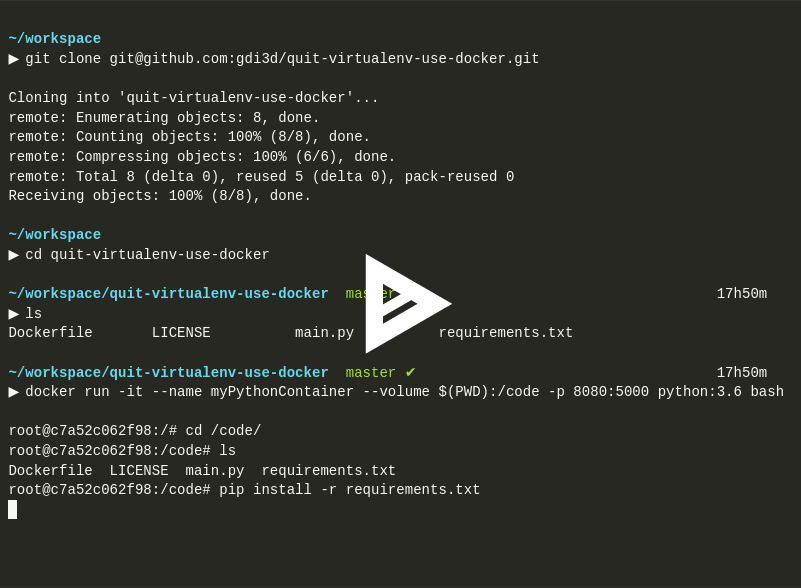 Let's build a custom image for our application.

By creating a custom image we can have ready-to-go container with all the things that we need for our application to run and also set the command to run when our container start.

Now we need to build the image:

The -t flag tells docker to build an image with the name myDockerImage, the :indicates a version for our image (you could also use v1.1, v1.2,... for ex.) and the . indicates that the Dockerfile file is in the current directory.

This image now has everything that we need to keep developing our application.

That's it!, now you can use Docker while developing and keep your OS untouched.

A bit more about containers

Docker and other containers technologies are based on LXC.

When you launch a container, just like a VM, you can choose what OS you want and you can pre-install software on it or use a public image already created by others.

The good part is that you can spin up a container, do your tests, run your code and then turn it off and forget about it, and you don't need to install any dependencies on your OS for your code.

There's a lot of benefits of using containers on a production environment, but I'm not going to get into that in this post. If you want to know more about it:

Adding Tasks with a Checklist to Wagtail Workflows

Making the most boring website ever with TypeScript, NestJs, React and others. Part 4.