As Angular developers, we owe Zone a great deal: it’s also thanks to this library that we can use Angular almost magically; in fact, most times we simply need to change a property and it just works, Angular re-renders our components, and the view is always up to date. Pretty cool.

In this article, I want to explore some ways in which the new Angular Ivy compiler (being released in version 9) will be able to make apps work without Zone much simpler than it was in the past.

As a result, I was able to increase the performance of an application under heavy load by a huge amount by adding as little overhead as possible using Typescript’s decorators.

Notice: the approaches explained in this article are only possible thanks to Angular Ivy and AOT enabled by default. This article is educational only and doesn’t aim to advertise the code described.

The case for using Angular without Zone

Wait a moment, though: is it worth disabling Zone as it allows us to effortlessly re-render our templates? Yes, it is incredibly useful, but as always, magic comes at a cost.

If your application needs a special performance target, disabling Zone can help deliver better performance for your application: an example of a case-scenario where performance can actually be game-changing is high-frequency updates, which is an issue I had while working on a real-time trading application, where a WebSocket was continuously sending messages to the client.

Running Angular without Zone is pretty simple. The first step is to comment out or remove the import statement in the file polyfills.ts:

The second step is to Bootstrap the root module with the following options:

Before we can start building our Typescript decorator, we need to see how Ivy allows us to bypass Zone and DI and trigger a change detection on a component by marking it dirty.

We can now use two more functions exported from @angular/core: ɵdetectChanges and ɵmarkDirty. These two functions are still to be used privately and are not stable, hence they are prefixed with the character ɵ.

Let’s see an example of how they can be used.

This function will mark a component dirty (e.g. need re-rendering) and will schedule a change detection at some point in the future unless it is already marked dirty.

For efficiency reasons, the internal documentation discourages the use of ɵdetectChanges and recommends using ɵmarkDirty instead. This function will synchronously trigger a change detection on the components and subcomponents.

While the functions provided by Angular increase the Developer Experience by allowing us to bypass the DI, we may still be unhappy about the fact we need to import and manually call these functions in order to trigger a change detection.

In order to make automatic change detection easier, we can write a Typescript decorator that can do it for us. Of course, we have some limitations, as we will see, but in my case, it did the job.

In order to detect changes with minimal effort, we will build a decorator that can be applied in three ways:

Let’s see two quick examples. In the image below, we apply the @observed decorator to the state object and to the changeName method. 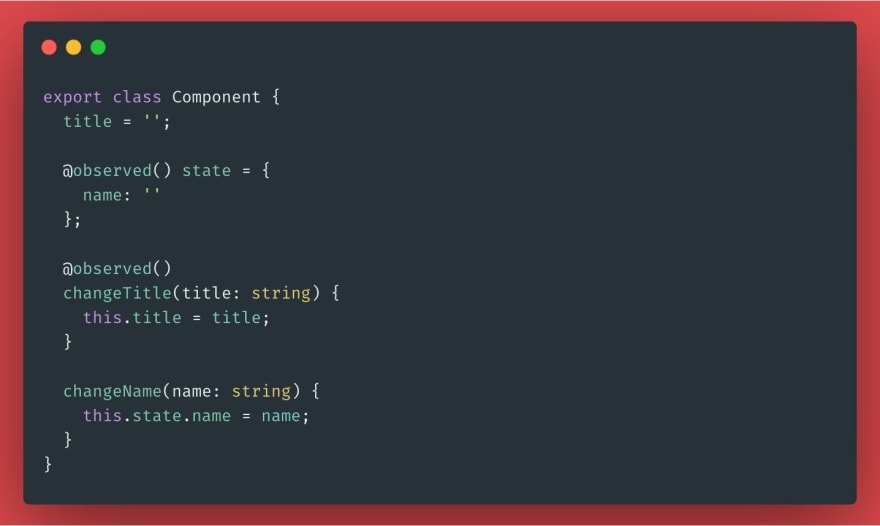 Below, we have an example with a BehaviorSubject:

Below is the signature of the observed decorator:

As you can see above, descriptor is optional as we want the decorator to be applied to both methods and properties. If the parameter is defined, then it means the decorator is being applied to a method:

Moving on, we now need to check what type of property we’re dealing with: an Observable or an object. We now introduce another private API provided by Angular, which I am surely not supposed to be using (sorry!):

In order to mark the property as “to be observed”, we use ReflectMetadata and set its value to true so that we know we need to observe the property when the component is initialized:

It’s time to override the onInit hook and check the properties when it is instantiated:

Let’s define the function checkComponentProperties which will go through the component’s properties, filter them by checking the value we set previously with Reflect.set:

The function checkProperty will be responsible for decorating the individual properties. First, we want to check if the property is an Observable or an object. If it is an Observable, then we subscribe to it, and we add the subscription to a list of subscriptions that we store privately on the component.

If instead, the property is an object, we convert it to a Proxy, and we call markDirty in its handler function.

Finally, we want to clean up the subscriptions when the component is destroyed:

This decorator is not exhaustive and will not cover all cases needed by large applications (ex. template function calls that return Observables, but I’m working on that…).

Though, it was enough to convert my small application. The full source code can be found at the end of this article.

Now that we learned a little bit about the internals of Ivy and how to build a decorator that makes use of its API, it’s time to test it on a real application.

I used my guinea-pig project Cryptofolio in order to test the performance changes brought by adding and removing Zone.

I applied the decorator to all the template references needed, and I removed Zone. For example, see the below component:

First of all, let’s check by how much the size of the bundle will be reduced by removing Zone.js. In the image below, we can see the build result with Zone: 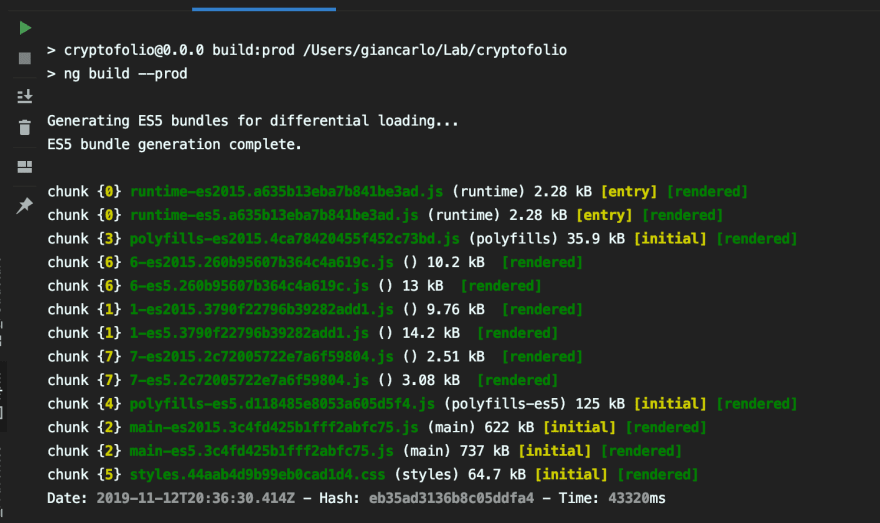 Anf the below was taken without Zone: 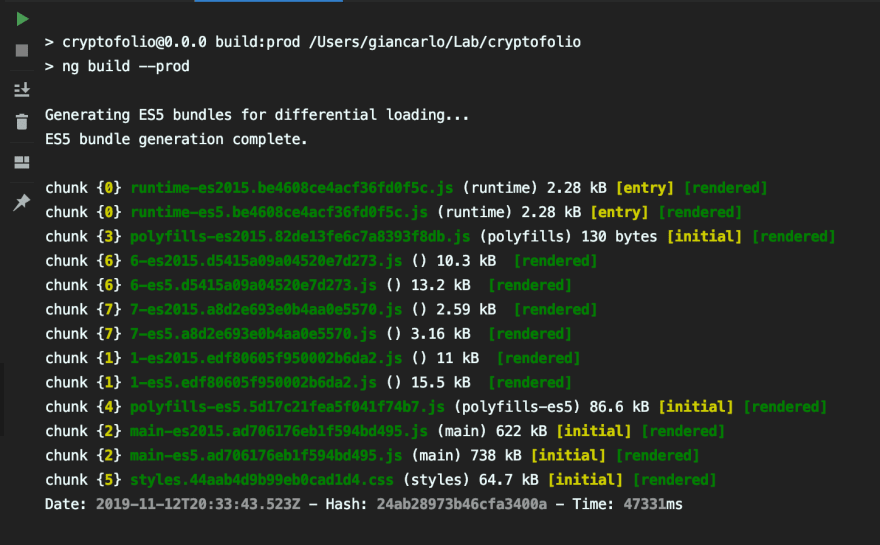 Taking into account the ES2015 bundle, it’s clear that Zone takes almost 35kB of space, while the bundle without Zone is only 130 bytes.

I took some audits with Lighthouse, with no throttling: I wouldn’t take the below results too seriously: in fact, the results varied quite a bit while I was trying to average the results.

It’s possible though that the difference in bundle size is why the version without Zone has a slightly better score. The audit below was taken with Zone:

The below, instead, was taken without Zone:

And now we get to the fun part: runtime performance under load. We want to check how the CPU behaves when rendering hundreds of prices updated multiple times per second.

In order to put the application under load, I created about 100 pricers emitting mock data, with each price changing every 250ms. Every price will show up green if it increased, or red if it decreased. This can put my MacBook Pro under a fair amount of load.

Working in the financial sector on a number of high-frequency streaming applications, this is a scenario I came across multiple times.

I used the Chrome Dev Tools to analyzed the CPU usage of each version. Let’s start with Angular with Zone:

The below is taken without Zone:

Let’s analyze the above, and take a look ar the CPU usage graph (the yellow one):

Notice: The results above are taken with the DevTools open, which decreases performance

I went on and tried to update 4 more prices every second for each pricer:

The above is not the most scientific benchmark there is nor it aims to be, so I’d suggest you to check out this benchmark and uncheck all the frameworks but Angular and Zoneless Angular.

I took some inspiration from it, and I created a project that executes some heavy operations which I benchmarked it with Angular Benchpress.

I then run a small benchmarking suite with Protractor and Benchpress: it executes the operations for a specified number of times.

Here’s a sample of the output returned by this tool:

And here’s an explanation of the metrics returned by the output:

Notice: The graphs below will only show the rendering time. The complete outputs can be found at the following link. 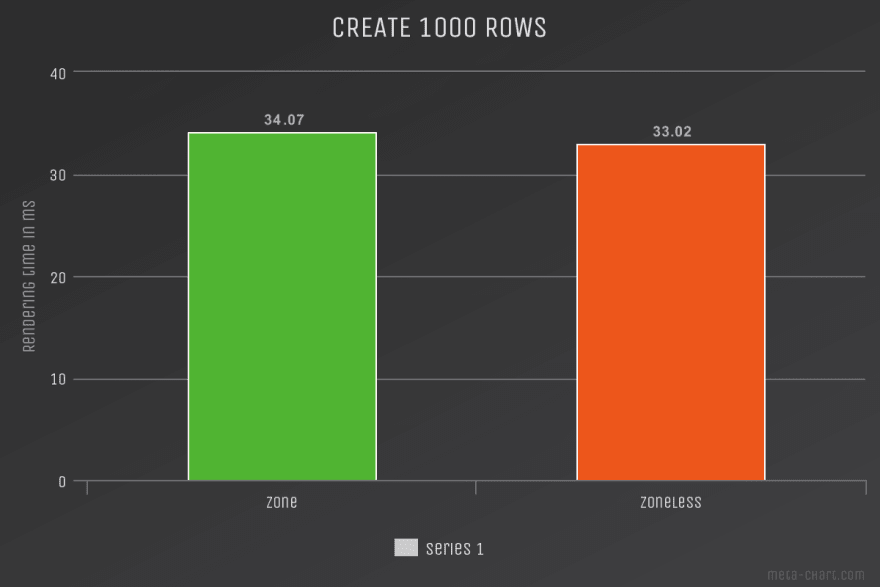 As the load gets heavier, we can see a bigger difference: 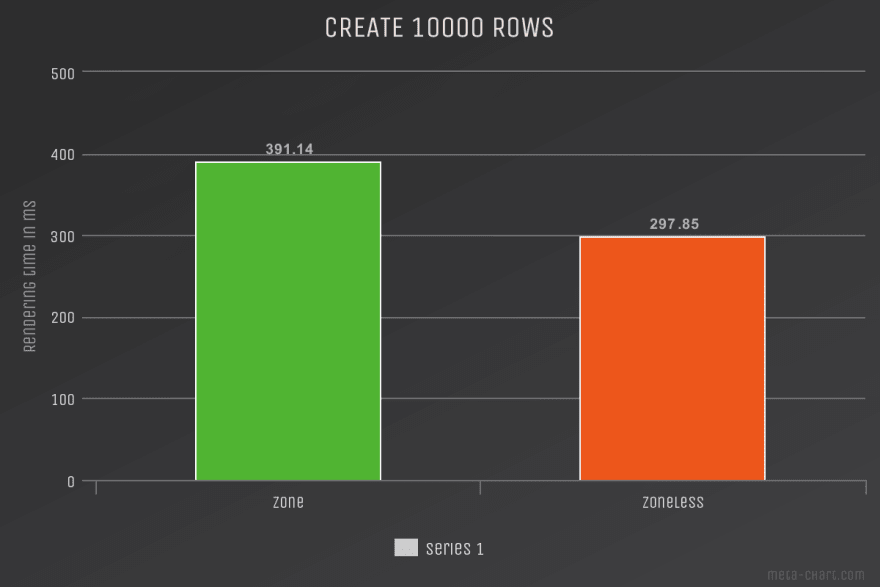 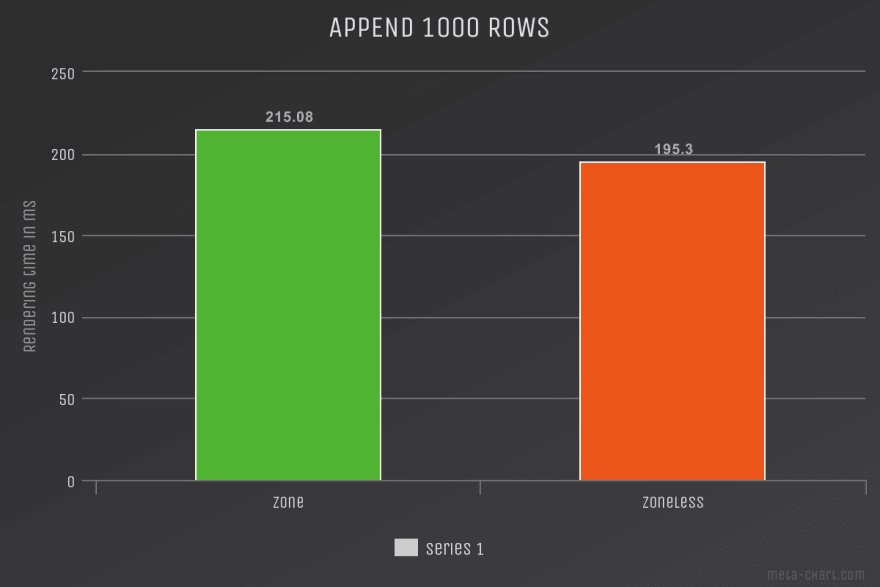 This test creates 10000 rows and removes them: 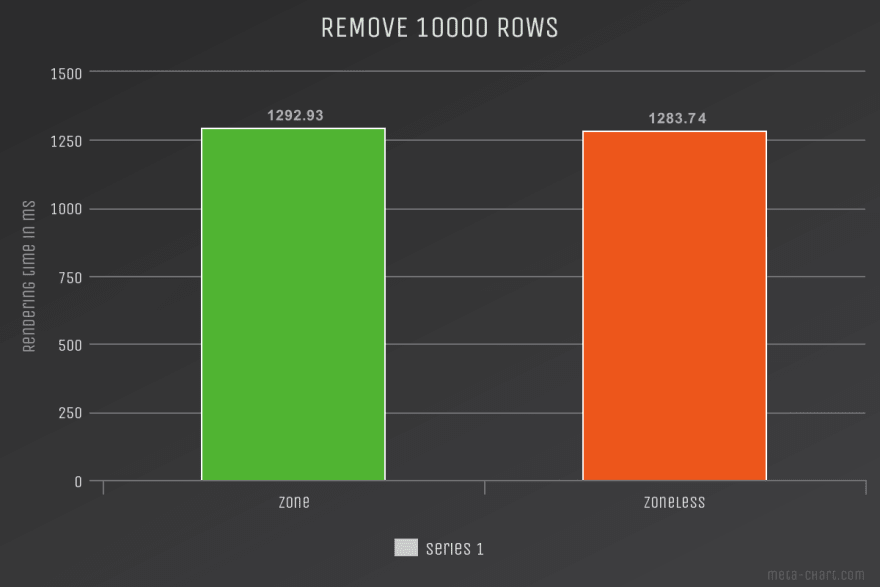 While I do hope you enjoyed the article, I also hope I didn’t just convince you to run to the office and remove Zone from your project: this strategy should be the very last thing you may want to do if you plan on increasing the performance of an Angular application.

Techniques such as OnPush change detection, trackBy, detaching components, running outside of Zone, and blacklisting Zone events (among many others) should always be preferred. The tradeoffs are significant and it's a tax you may not want pay.

In fact, developing without Zone may still be quite daunting, unless you have complete control over the project (e.g. you own the dependencies and have the freedom and time to manage the overhead).

If all else fails, and you think Zone may actually be a bottleneck, then it may be a good idea to try and give Angular a further boost by manually detecting changes.

I hope this article gave you a good idea of what may be coming to Angular, what Ivy makes possible to do, and how you can work around Zone to achieve maximum speed for your applications.

The source code for the Typescript decorator can be found at its Github Project page:

I hope you enjoyed this article! If you did, follow me on Medium, Twitter or my website for more articles about Software Development, Front End, RxJS, Typescript and more!