In this blog post, I am going to be going through how to containerize both a.NetCore API and a MySql Database and connect both together using a docker-compose file. If you are new to Docker you can check out two of my previous posts. containerize-an-aspnet-core-application-with-docker and demystifying-docker.

The API for the tutorial can be found on GitHub here. If You clone the Url and run a dotnet restore you will have the API I built for this Tutorial. It is essentially the skeletal project when you create a.NetCore WebApi project with a few changes which I will be going through here.

I also added swagger to the startup class for easy API testing.

In order to follow the next steps, you need to have installed Docker on your PC.Install Docker.

This is a text document that is used by Docker to build a custom image for your Web API. I touched a lot more on this here.

Let's go through this a bit

The Compose file provides a way to document and configure all of the application's service dependencies (databases, web service APIs, etc). This is a YAML file named “docker-compose.yml” that you put in the root directory of your application. It consists of a series of entries defining each Docker container in your composition. The Docker Compose file for this project can be found below. I have added comments on every line to explain what each line does. When it comes to docker-compose files and YAML files in general spacing and indentation are crucial; you have to keep an eye for that.

Let us analyze the docker-compose file a bit.

1.DATABASE SERVICE
- image---We define the database image version we want so docker fetches that for us from docker hub.
- port---here we tell docker to map port 3306 from the docker container to the host machine.
- volumes----here we define our volumes. datafiles should be stored at this path but that path is actually a reference path to somewhere in our computer that docker has access to.
The second volume is a path to an SQL script to create our Users Table. Supposing you wanted to create a new Table or seed records to the database on initialization you could do it here. Here I created a new Table called Users on Usersdb.

Remember those config keys we talked about earlier. You specify them here.
MYSQL_ROOT_PASSWORD: assigns a root password to the root user.
MYSQL_USER: creates a new user.
MYSQL_PASSWORD: Specifies new users' password.
MYSQL_DATABASE: creates a new database.
By default, the new user created will have admin rights to the database specified here.
To wrap up the Database service- it pulls the MySQL image from docker hub maps the ports, configures the volume for the DB, and then creates a new user on the database.

The DBHOST variable specifies the hostname for the MySQL database.

Now that we have gone through the docker file and the docker-compose. All we need to do is cd into the projects directory and run this command.

This command tells Compose to start and run the entire app as defined in the (docker-compose.yml) file. 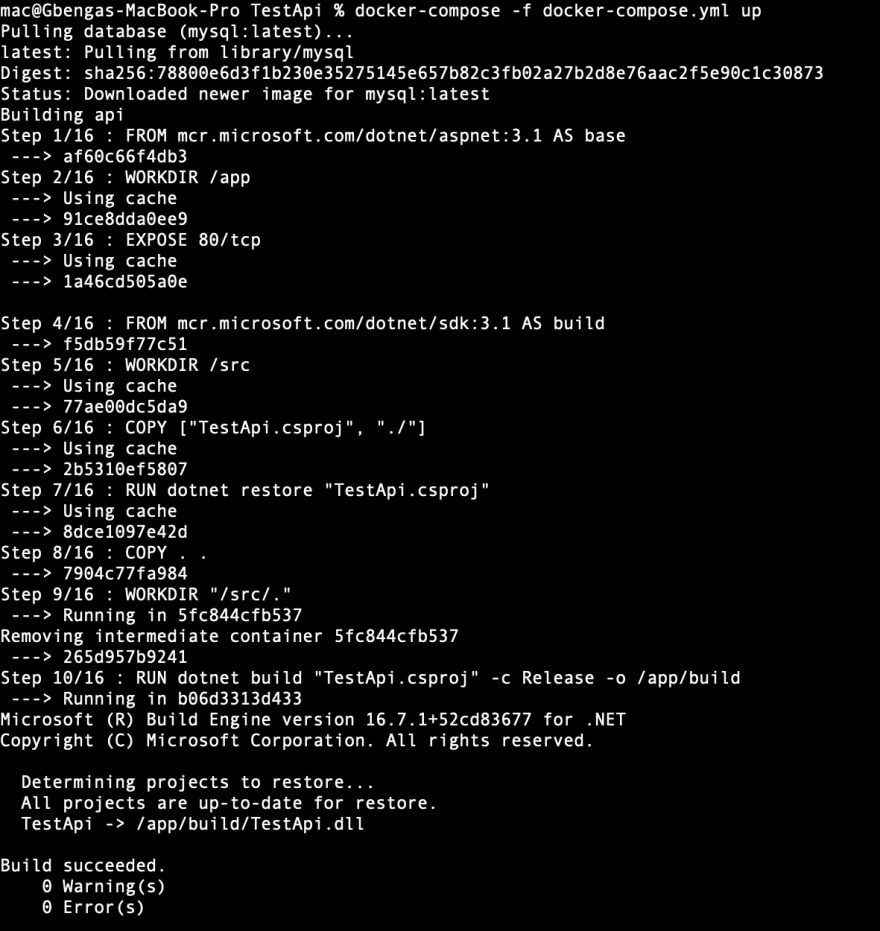 As you can see all the steps we defined are being run. If you want it to run in the background you can add the -d flag. Run a docker ps -a to see all the containers. our two containers are running.

Navigate to this URL. http://localhost:5000/swagger/index.html. To check if your containerized web API is running. Add a few users and call the GetUsers Endpoint.
You can see the users you just added.

testapi_database_1 is the database container name

Once you are inside your container, you can connect to your MySQL server and create a new Database as follows:
Input your password and check out your data. 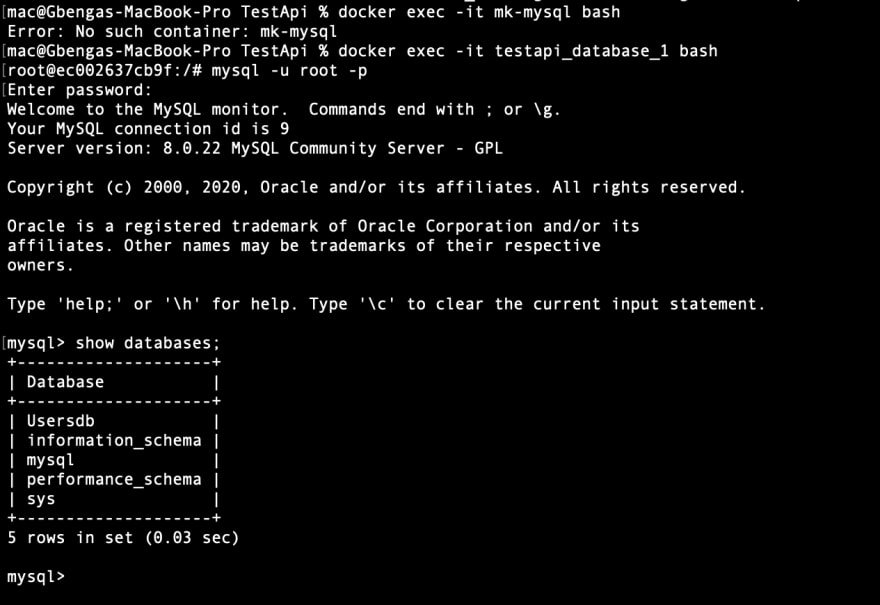 .
If you run this command

you can inspect your testapi_database_1 container
Scroll down you could see all the volumes you created.

It is because docker does not have access to that folder in your computer you can give it access by navigating to your docker desktop dashboard --------->Setting-------->Resources------>FileSharing and then add your own path.

Ensure you stop any other instance of the MySql Server you have running on your computer.

In this tutorial, we have

Thank you for reading!!!