When it comes to building an app, we can’t overstress the importance of digital transformation today. Everyone either has already done it or is doing it right now. No one is surprised by the fact that mobile traffic has surpassed desktop anymore. Mobile first is a given these days, something we have to embrace and work with. Cloud computing has gone mainstream over the last years. IoT is changing not only businesses, but it also affects our everyday life. The rise of the Artificial Intelligence, Augmented and Virtual Reality, smart assistants, and other technologies prove that doing business like before doesn’t cut the mustard anymore.

To get you an idea of where things are heading in the mobile app world we’ve decided to take a quick look at the state of affairs and narrowed down a list of the most popular tech directions to take in the nearest future.

What’s Going On in the App World?

Smartphones have become an integral part of our lives. It is clear that the trend is nowhere near subsiding. We will continue using mobile phones and new apps will pop up in our app stores. Right now we are drowning in apps. According to Mobile App Usage statistics, there are more than 2 million apps in app store. And this is only the beginning. Their prognosis – by 2020 mobile apps will gather $ 189 billion in revenues via app stores and in-app advertising. Download rates look quite astonishing as well. On average, we have installed at least 40 apps on our mobile devices. Downloads in Apple App Store alone reached over 100 billion last year and this number is only expected to double.

And what are the key categories we spend our digital time on? According to the latest data, the top two categories in Apple App Store as of October 2017 are Games (25.06 %), followed by Business (9.81%). The whole list goes as follows: 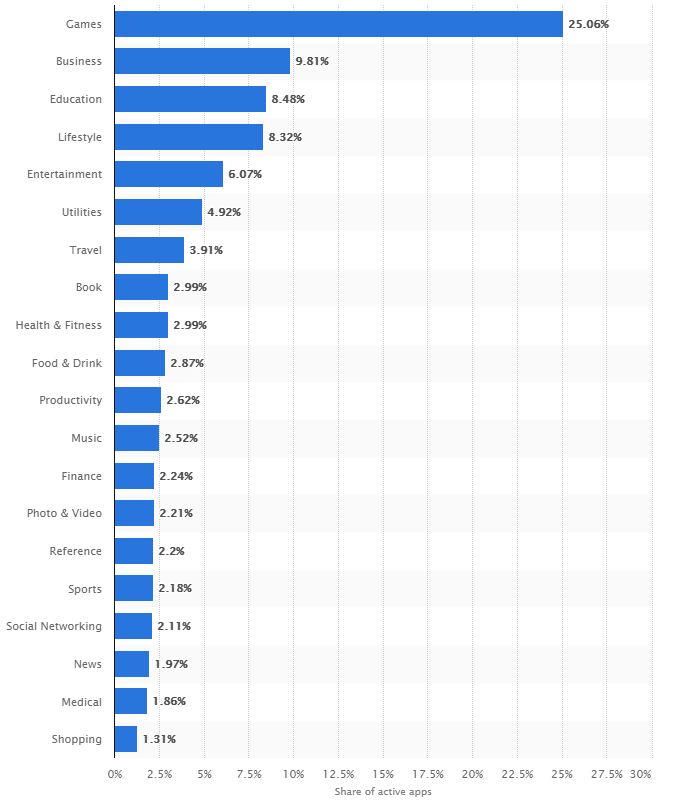 
Another interesting observation pops up when it comes to millennials, one of the top users of mobile devices. If asked about the most popular mobile app, 9 out of 10 would probably say Facebook. And yes, according to comScore, Facebook was the most essential app for Millennials in 2015 (for 21 % of users). In 2017, it’s actually Amazon (35 % of users)

But there are disturbing statistics as well. Being spoilt for choice, we rarely use apps at all. Nearly eight out of ten people use only three apps! The abandonment rates don’t look good either. An average app loses more than a quarter of its users with three days of its launch. And the most common reason – “I rarely use it.”

So what are the secrets to building an app in our day and age, and not just an app but a winning app? Knowing what’s going on on the market and an actual demand would be step number one. And that’s where statistics comes in handy. Another important aspect is building a user experience not just to get featured in the app store but to move to your users’ phones, and ideally hearts. And to grab their attention, you have to invest in innovation. And that’s why you need to stay on top of what’s in style in the tech world this season and what it is that you need to build an app.

Tech Trends for Building an App

Change is the only constant today. And modern enterprises that succeed are the ones that are quick to adapt to new technologies and ever-changing demand of the market. The key is to make innovation happen rapidly. When it comes to building an app, enterprises are seeking new ways to embrace emerging tech and leverage them to reach their customers in new ways. And there’s plenty to choose from.

How to Use CIFS to Mount a Windows Share on Linux