On the 10th and 11th June 2022 Scottish Summit 2022 happened and I was there. It was an awesome event and I will attempt to summarise what happened.

On Thursday 9th I travelled down on the train full of excitement about the event. Once I got to the hotel, I was immediately greeted by James Cook, I was obviously in the right place, this weekend is going to be good.

The hotel was less then 5 mins walk to the conference, which was being held at the Technology and Innovation Centre, University of Strathclyde. Registration was simple wave your tickets (which were free, apart from a contribution to charity), and you get your badge and a wrist band. (Pink for people contact, blue for hold back) I then got chatting to Keith Atherton, who amazingly lived in part of the world where I grew up. (Amazing what you learn at conferences!) 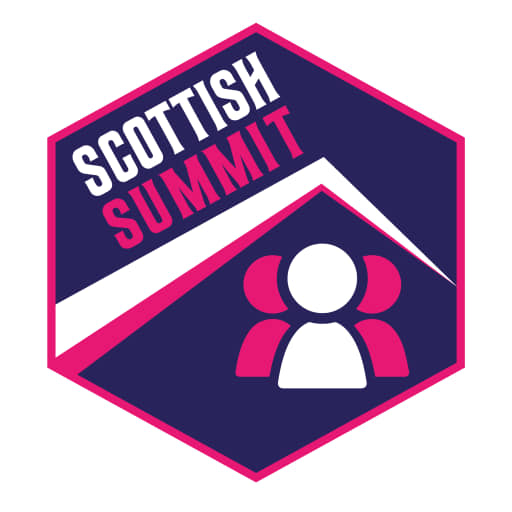 Time for the Keynote talk. Which of course because we are in scotland was introduced by bagpipes marching through the room! The talk was given by Connell McGinley and was titled Disability Awareness & Inclusivity. This talk was amazing. Connell is deaf and gave the entire talk with sign language and this was translated for the rest of us to hear. Connell talked about his career and the barriers he faced. Microsoft Teams was an amazing improvement to his work life, as the captioning allowed him to talk with customers for the first time!

The purple pound is the amount of spending power people with some kind of disability (15% of the worlds population) have and it is approx $13 trillion. If businesses can open their products up to more people it is a win for everyone. This was a really powerful way to open up the conference.

Next up was David Small talking about Azure DevOps pipelines and Power Platform. I don’t know much about Power Platform however all the DevOps stuff was great, some of it reinforced stuff I already knew, some was new.

Sam Cogan was next talking about Infrastructure as Code. Resources for this talk are on his github This was a great comparison of different tools for doing Infrastructure as Code. Terraform, Pulumi, Bicep, ARM templates where all covered. The difference between stateless and stateful tools. If you have a state file you need to look after it, so if you don’t need this think about using a stateless tool. If you are only using Azure consider Azure. If you are a C# (other languages are available) think about using Pulumi (which I have used and quite like)

Next was Naming stuff in Azure with Barbara Forbes, she went through the challenges of getting naming right, especially with all the exceptions Azure throws into the mix. Tagging your resources can really help. Also Azure Policy can help report on what you have (and even enforce it, if you are careful). Lots of interesting stuff, as my naming strategy is non existent at the moment!

Last talk of the day was ‘What I didn’t know about Office 365’ with Sharon Weaver Sharon went through Shifts, Planner and Forms all included in your Office 365 subscription.

To start the second day I had Maxim Salnikov talk about Static Web apps, if I had know it was about Static Web Apps again I may have chosen a different talk but this was still a great talk. Again the CLI was mentioned which I really need to investigate further.

Next up was James Cook’s talk Monitor Azure DevOps and GitHub with Sentinel. This was all about securing your code repositories with Sentinel and looking through the logs at what is happening. To use this tech you need either a GitHub Enterprise subscription or Azure DevOps using Azure AD Logins as it is designed more for the Enterprise than a one man band kind like me, however I will see if I can have a play around with it and see what I can learn.

Sarah Lean gave a talk about the state of IT Ops tools in the hybrid age. I enjoyed this talk, Sarah added extra fun elements like talking about the scottish language and the highland cow. The first tool mentioned was Windows Admin Centre. I have heard about this but never used it, must have come out after I switched from Ops to Dev. Looks very Azure like. Azure Update Management was mentioned next, which I have used and works really well. This is the next generation of Update Management, a bit like WSUS from my server days. Azure Policy was mentioned again, a great tool for reporting and/or enforcing things. Azure Arc was mentioned, a way to bring Azure to you. With all these tools consider why you want to use them, what benefits do they bring, not just becuase it it shiny!

Mental Health with Rory Neary. This was one of my favourite talks. Rory talked about his mental health problems, his challenges, some of his coping mechnaisms some of which involved the power platform. He encourgaged us all to be more open about talking about Mental Health. Lots of talks have a solution to a problem, this one didn’t, but that Ok. We are all on a journey complete with its ups and downs.

Accessibility for Blazor with Dennie Declercq. I wasn’t as keen on this talk as some of the others, while I agree Accessibility is very important the solutions presented felt very generic and not really specific to Blazor. However I do have some ideas to try now and the accessibility browser extension sounds like a great idea.

One of the best things about the conference was talking to people between sessions and afterwards. I am an introvert and tend to keep quiet but even I managed to talk to (for me) loads of people. Some of these I had previously connected to on twitter, and some were brand new on the day. I would encourage anyone reading this to reach out to the community, go to an event like this, you will be surprised how friendly and helpful people can be.

How do I keep my devs busy while waiting on code review?

Flutter How To Use Injectable

Simon Foster
Software Developer based in the North of England. More than just another developer.
A brief history of Source Control Visual Studio Keyboard Shortcuts Diagrams with Mermaid

Once suspended, funkysi1701 will not be able to comment or publish posts until their suspension is removed.

Once unsuspended, funkysi1701 will be able to comment and publish posts again.

Once unpublished, all posts by funkysi1701 will become hidden and only accessible to themselves.

If funkysi1701 is not suspended, they can still re-publish their posts from their dashboard.

Once unpublished, this post will become invisible to the public and only accessible to Simon Foster.

Thanks for keeping DEV Community safe. Here is what you can do to flag funkysi1701:

Unflagging funkysi1701 will restore default visibility to their posts.