I like to keep things simple and stick to the defaults as much as possible (as much as I would love to customize the hell out of things, sadly I don't have that kind of time nowadays) and after distro-hopping for a while, I was happy to use stock Ubuntu.

I stuck to the non-LTS release starting from 19.04 and then upgraded to 19.10, but all this while one thing that bothered me a lot was the amount of RAM being consumed by the Gnome Window Manager. It's always fine after a fresh start or reboot at the beginning of the day with around 500-600 MB of usage but by sunset, my usage generally climbs upwards of 1.1 GB. On a 16 GB that's a huge amount especially when my Android IDE, Emulator, Browser and 5 other things are all fighting each other for the already vanishing sweet piece of RAM pie. And also there is this nagging feeling as a developer that there has to be some sort of a memory leak somewhere, because of which this process keeps increasing in size every few hours. At one point I was considering buying more RAM for my laptop just because this was becoming a daily nuisance for me.

I then started to look for a lightweight Window Managers (WM's) to replace Gnome with something more stable and easy on the memory. There are a lot of excellent options like XFCE and some others, but all of them seemed very outdated in terms of their underlying technology for 2020 (though being more stable at the same time, from what people shared on forums).

A good friend of mine (and a huge Linux advocate) had suggested me to try out i3wm (a Tiling WM - more on that later) some time back and I quickly dismissed that option at that time because I wasn't convinced about having a keyboard-driven WM. But this time around I gave it a more serious look as I was pretty pissed at Gnome and couldn't wait for the Ubuntu 20.04 update to land.

And I discovered Regolith Linux

While giving i3wm a more dedicated research time I found Regolith Linux, which instead of creating a new DE (Desktop Environment) chose to create a collection of open source components bundled in a way to make transition and usage of i3wm easier. Looking at there Github Page, its just a meta package which just holds the issue tracker and release files. It very thoughtfully combines various independent components like i3-gaps WM, Rofi application launcher and notification system, i3bar etc. to create an easy to adopt package, which otherwise takes a lot of time to setup when starting with i3wm.

All this combined makes up for a fairly easy to use Tiling Window Manager. A Tiling WM is a very unconventional kind of a WM where multiple applications or windows when opened together do not float or overlap each other. They only open beside each other, oriented either vertically or horizontally. No more floating windows, no hidden windows behind one another, no need for a mouse to move windows around. Everything is laid out like Tetris tiles alongside each other. And what do you do when you have too many things open at the same time or you want one of the windows to be full screen, you simply move it to a different 'workspace'. In the following sections, I will talk in more detail about how to get more comfortable with this fundamental shift in the way we use our desktop environment all the while using just the keyboard.

Regolith is available as both a pre-bundled ISO and a standalone installable PPA. I chose to install it over my current setup as a PPA.

Use the following commands to install Regolith via PPA.

And once installed, restart and Regolith will appear as a desktop session on the login screen. 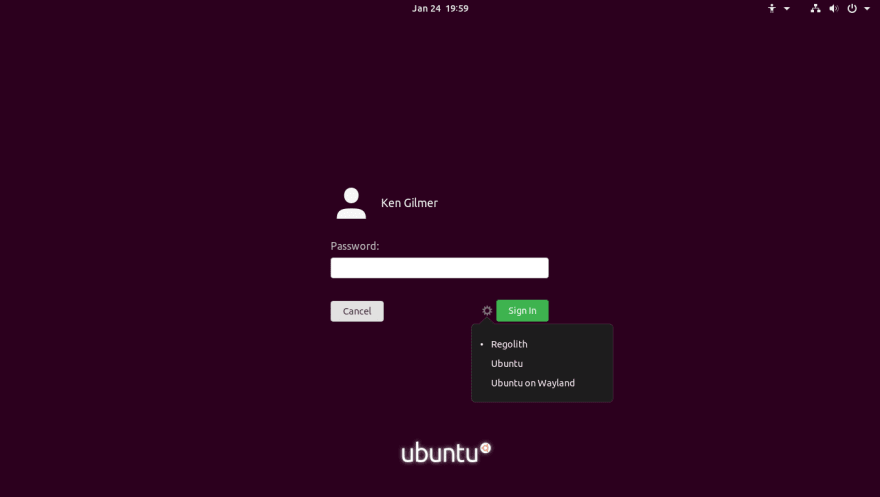 When you login, you are welcome to this screen with the quick list of keyboard shortcuts to help you start your journey on adopting Regolith. This helper overlay is what makes it so easy to start using the i3wm. 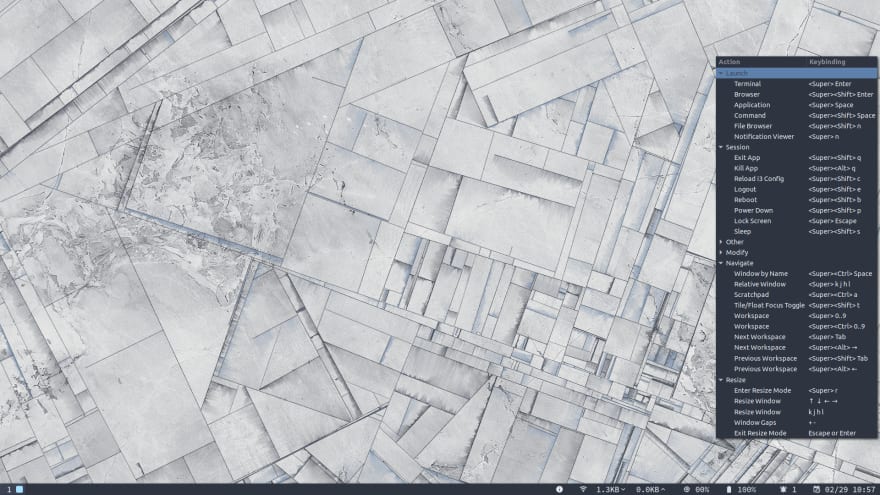 Super key is your best friend in this desktop environment. Everything that you wish to do all starts with the Super key. To show or hide this keymap overlay just press Super + Shift + ?
To launch an application, just press Super + Space to start the launcher app

I won't list all the keyboard shortcuts here which are readily available in the help menu. Rather I would talk about some common usage patterns and how to quickly get into the habit of using those patterns.

But before that, let's get a little more familiar with the environment itself.

Regolith bundles the 'Rofi Application Launcher' which is a type-to-search type of a launcher. Just start typing what you are looking for and it will immediately filter results based on the text. And as you use this launcher more and more it starts remembering your choices and starts showing them on first like in the image below 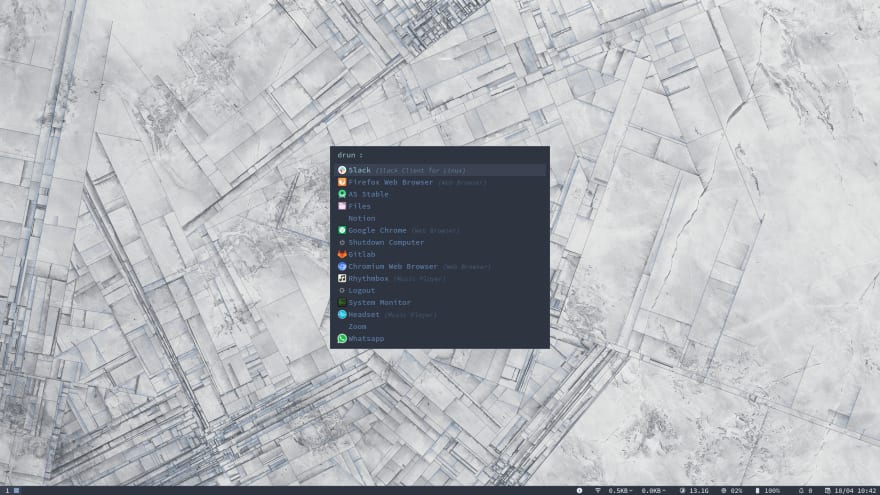 One thing to remember here is that 'restart' is actually 'reboot' here so it might be something to look for when starting out.

Notifications is probably the most not-so-obvious feature in Regolith. Regolith bundles with the Rofication Notification System which takes a very bold decision of never showing an alert for your notifications, making the setup distraction-free. All new notifications received go on to incrementing a counter near the bottom right of the i3bar. There is still a notification sound but no visible UI alerts. To see the notification you press Super + n to open a rofi window showing all the notifications. This is something I like a lot since it helps alleviate visual distractions while I'm doing deep work. 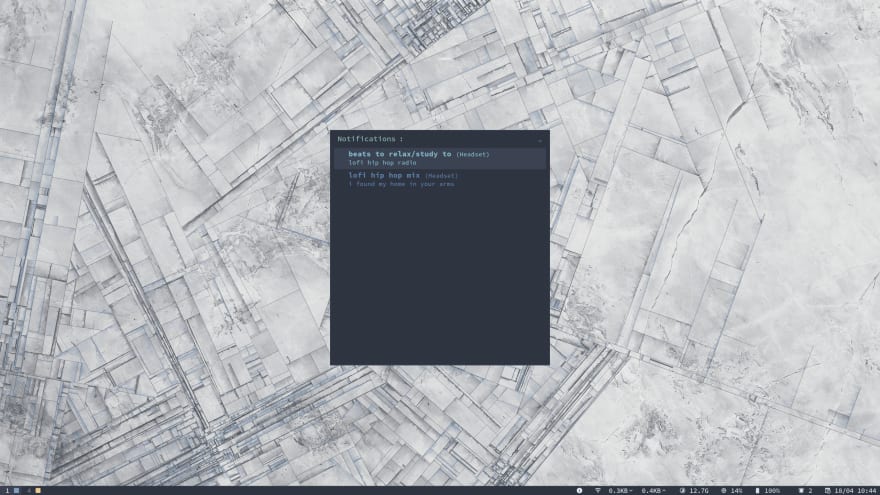 One good thing about Regolith, which is not available in the standard i3wm setup is the availability of the traditional gnome settings manager to allow you easy access to system settings without the need of relearning anything here. Its implemented as normal floating windows easy to interact with using a mouse.

Though I was pretty happy with the default configuration that Regolith provides for i3, there were a few things I still wanted to change to help make things easier.

But before starting any customization we first have to setup the i3 config file to modify it. Best way to do so is to follow the steps in this link

Not everything is perfect

Frankly, I don't have much to write in this section apart from the fact that using Regolith definitely had its own learning curve but not as much as a vanilla i3wm setup would be. It's obviously about what clicks for whom and putting in just the little bit of effort to becoming more productive and feel like a "Hacker Man".

Though I'm still learning the ropes of using more keyboard shortcuts to get a better window layout, but all that I feel will come with time as its need would move up from good-to-have to must-have

Though I'm super happy with my setup right now, I find the Pop Shell extension from System76 to be really interesting. This extension will bring the goodness of tiling WM to the standard Gnome setup which will make it further easier to use for first time adopters. But I still can't shake the feeling that using Gnome will still be a lot more resource hungry compared to the minimalistic i3wm via Regolith. None the less I'm also looking forward to the new developments and releases of Regolith Linux and if possible consider a donation to the developers.

How to install older rubies using RVM on Ubuntu 22.04

How to deploy a Node/React App on a Linux server

Once suspended, funkyidol will not be able to comment or publish posts until their suspension is removed.

Once unsuspended, funkyidol will be able to comment and publish posts again.

Once unpublished, all posts by funkyidol will become hidden and only accessible to themselves.

If funkyidol is not suspended, they can still re-publish their posts from their dashboard.

Once unpublished, this post will become invisible to the public and only accessible to Kshitij Aggarwal.

Thanks for keeping DEV Community 👩‍💻👨‍💻 safe. Here is what you can do to flag funkyidol:

Unflagging funkyidol will restore default visibility to their posts.