Updated on 2021-09-06: This article was largely revised to take into account the rotation of the attached game object and the direction of the CapsuleCollider.

You can also get the Colliders by configuring a Kinematic Rigidbody Trigger Collier and handling the OnTriggerEnter message, but the method is handy and has useful applications.

The following shows the signature without optional arguments of Physics.OverlapCapsule.

The left side of the following figure illustrates these arguments. Each of point0 and point1 has the center of either of the hemispheres. The radius has the radius. The specs of a CapsuleCollider on the right side have its center, height, and radius. They are quite different, so you need to convert them. 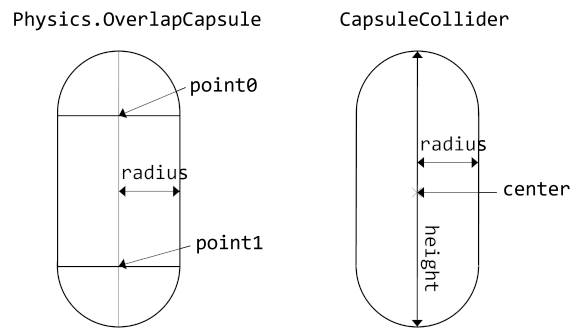 The following shows how to calculate the point0 and point1 for the CapsuleCollider. The calculation must take into account the direction property of the CapsuleCollder, which can be 0, 1, or 2 correspondings to X, Y, or Z-axis, respectively.

We must specify the point0 and point1 in the world space.

The following shows the implementation of this translation. Please notice that some components of the vector returned by the TransformVector can be minuses.

Finally, we can invoke Physics.OverlapCapsule with the values calculated so far.

Notice that the returned Colliders naturally include the CapsuleCollider. You can disable it in advance if you want to exclude it.

Physics.OverlapCapsule is so useful that you can give it a slightly smaller size to exclude just touched Colliders from the result. You can also give it a larger size to get almost colliding Colliders.

By the way, Physics.OverlapCapsule allocates and returns an array to store the results in each invocation, so it causes a lot of allocation when you invoke it on every frame.

In this case, you should use Physics.OverlapCapsuleNonAlloc. This variant stores the results to an array allocated in advance. The usage is shown below.

In this usage, Physics.OverlapCapsuleNonAlloc can detect up to 5 overlapped Colliders. The method takes an array of 5 Colliders allocated outside Update, stores the results in the array, and returns the number.

How To Differentiate If, Else if, Else (but with my mother as example)

Once suspended, fujieda will not be able to comment or publish posts until their suspension is removed.

Once unsuspended, fujieda will be able to comment and publish posts again.

Once unpublished, all posts by fujieda will become hidden and only accessible to themselves.

If fujieda is not suspended, they can still re-publish their posts from their dashboard.

Once unpublished, this post will become invisible to the public and only accessible to Kazuhiro Fujieda.

Thanks for keeping DEV Community safe. Here is what you can do to flag fujieda:

Unflagging fujieda will restore default visibility to their posts.